The ever-evolving backdrop of 2020 has certainly kept municipal investors on their toes. Once again, the last few weeks have brought more news to digest, including clarity on the political landscape in Washington and welcome news of a potential vaccine. As we approach year end this could mean there are reasons to believe that recent trends of improvement, such as credit spread tightening, might accelerate. At the same time there is likely new reason for caution as previously trends, such as a deference for higher credit qualities and lower rates on the long end, could be set for reversal.

On the election side of the equation, most fixed income markets responded to election results with a post-election rally and municipals were no exception. 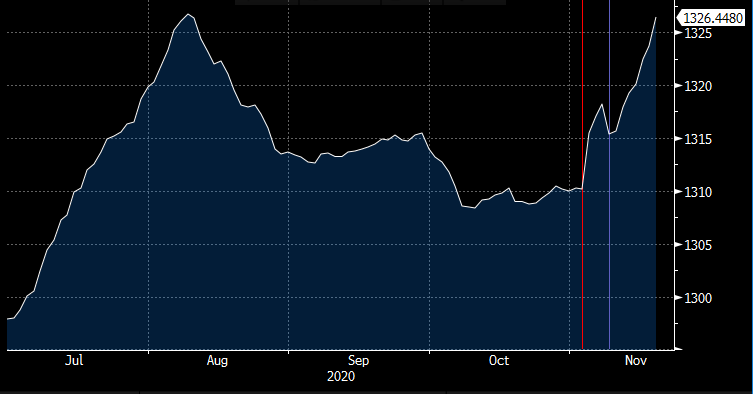 However, this might have been a little bit of an election head fake. The post-election rally was modest and left the market well short of highs touched as recently as late July and early August. It took the subsequent vaccine announcement to push the market back to recent highs. A “blue wave” scenario that likely would have benefitted municipals the most of any outcome failed to materialize. Higher taxes and government spending in areas such as infrastructure would likely have created tailwinds for the municipal markets. At this point, the most likely outcome, in our opinion, seems to be a divided government with Republicans controlling the Senate. This makes both higher taxes and more government spending less likely. Still, maintenance of the status quo is good news and the market’s response likely reflects this along with the removal of some uncertainty moving forward. For the municipal market, a divided government makes fiscal aid more of an unknown. The two sides agree on the need for aid, but not necessarily the size. It has yet to be determined whether stalled stimulus talks continue to be an overhang, although it seems likely we will eventually see aid with the size to be determined. Outside of the stalled stimulus, which has been a known for quite some time, the election results likely have little long-term impact on municipal market.

Does Market Appetite for Credit Risk Spur Reversion to the Mean?

Reaction to the potential long-term impact of COVID-19 has created distortion in many areas of the municipal market. This is especially evident in sector credit spreads. Areas such tourism, higher ed and transportation widened sharply in the 1st/2nd quarter on concern over the depth and duration of the downturn but also on some concern over the long-term impact on consumer behavior. After staging a strong summer rally that saw yields bottom in early August, these out-of-favor sectors saw yields drift higher as rates began to rise and credit spread tightening slowed on renewed fall COVID-19 fears. The trend has shown a sharp reversal post vaccine news. The trend reversal is especially evident in the transportation sector (airports, toll roads, public transportation, etc.) as yields have moved down sharply in November. This reflects credit spread tightening and a stronger comfort level with out-of-favor sectors post vaccine announcement. U.S. interest rates moved higher in recent weeks on the same improving outlook, but the credit spread tightening in many out-of-favor sectors played the dominate role pushing yields lower even in the face of rising Treasury rates.

On the flip side, higher quality bonds and sectors perceived as less impacted by the pandemic have been the darling of the post-COVID-19 environment. The relative outperformance for higher quality bonds has narrowed as credit spreads have tightened but the gap between BBB yields and AAA yields remains significantly wider than pre-pandemic levels. 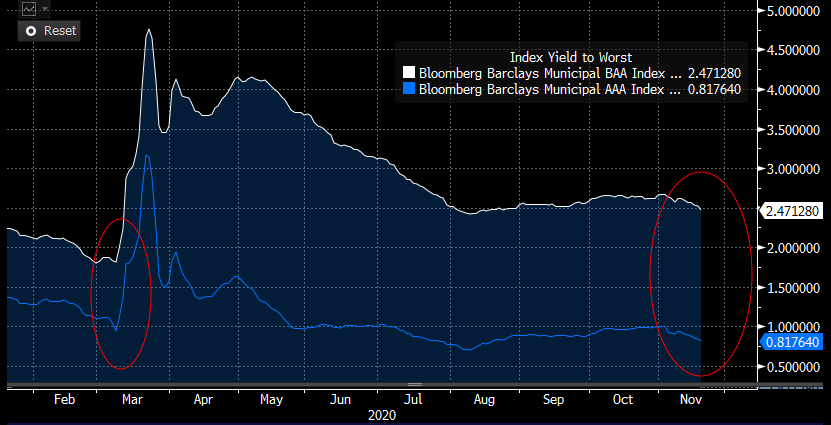 Reversion to the mean with lower credit qualities outperforming higher is a potential where vaccine developments are positive. Even the most out of favor sectors, such as student housing and tourism/hotels, could see relative outperformance versus those areas of the market like utilities perceived as higher quality and bid up in search of safety. Lower quality bonds could also continue to close the yield gap relative to higher credit quality holdings. The backdrop moving into 2021 could be one that favors credit risk.

Does “Lower-for-Longer” Tell the Whole Story?

The Federal Reserve has taken unprecedented steps in the face of the COVID-19-related slowdown including flooring Fed Funds, setting up lending facilities for issuers to provide a liquidity backstop and even making direct purchases in the primary and secondary corporate markets. The Fed has shown no indication of hiking rates anytime soon. In fact, the Fed provided themselves cover for keeping rates low and letting inflation run hot by moving to a policy of “Average Inflation Targeting” in August. Would this make a lower-for-longer theme almost a certainty? Sort of. While short term rates, which are sensitive to the Fed Funds rate, are likely lower for longer, bond investors should consider the changing shape of the yield curve. Specifically, the steepening that has taken place since the middle of the year.

While the Federal Reserve likely has no intention of hiking Fed Funds anytime soon, a successful lower-for-longer campaign that drives up growth expectations and increases inflation could drive accelerated steepening of the curve which could push longer-term rates higher. Higher expectations for growth and higher expectations for inflation are the two main drivers of longer-term yields, not the Federal Reserve. Bond holders should consider that when allocating to duration. Lower-for-longer and higher rates on the long end of the curve are not mutually exclusive. This could eventually have an impact on municipals. For much of the year municipals have enjoyed a significant yield advantage over U.S. Treasuries that is evident when looking at municipal-to-Treasury ratios. For example, 30-year municipal yields have been well in excess of 100% of Treasury for a good portion of the year.

This yield advantage has insulated municipals against broader Treasury market volatility; however, the insulation is finite. If the yield curve continues to steepen with rates moving higher on the long end, a point will be reached where municipal yields no longer look attractive relative to Treasury yields. All good things must come to an end and as the yield advantage municipals have enjoyed relative to Treasuries continues to evaporate rate volatility for municipals could follow.

In conclusion, the changing dynamics of the COVID-19 backdrop cap a year full of uncertainty and unknowns. While acknowledging we are not out of the woods yet, it is reassuring to see positive developments on the vaccine front going into year end. One of the biggest uncertainties for all markets in 2020, much less municipals, has been the lack of a firm timeline on a potential vaccine. With more clarity, market participants are able to make more informed decisions. Moving forward this could benefit lower credit qualities with continued spread compression. In addition, while the short end of the yield curve is likely lower-for-longer any positive developments on the vaccine front would likely steepen the curve and might pressure long-term rates. Finally, with a timeline firming one might expect that the more out-of-favor sectors and lower credit qualities see outperformance on a relative basis moving forward.