While Crypto and Stocks Play, The Bond Market Screams

This Has Gone Up More Than Bitcoin, And Retirees Should Take Notice

Over the past 12 months ending last Friday, the price of Bitcoin is up 487%. That’s impressive to any investment market observer.

However, that gain has likely been garnered more by younger investors and some early-adopters in the “big money” crowd. The retiree or pre-retiree has probably spent much of the last year trying to determine how much stock volatility they can take on.

After all, last Friday was the one-year anniversary of last year’s S&P 500 top. Five weeks later, as of March 23, 2020, that index had lost about 1/3 of its value. Then, it made it back, and more. That was about the fastest drop and fastest recovery of that magnitude investors have ever seen. Regardless of how the past 12 months have treated your portfolio, it should have been a great time to take account of your objectives and strategy as an investor.

As noted above, and shown in the chart below, Bitcoin has been on a tear during that time, barely stopping to catch its breath and let new potential investors in. Regardless of what you think of the fundamental rationale for owning cryptocurrencies, the one thing that doesn’t lie is price. And when it comes to price, Bitcoin has been a winner the past 12 months.

However, if you are the type of investor that is reticent to place a big chunk of your fortune in something as speculative as the crypto space, I have some good news. There are other areas of the investment markets that are also “breaking out” in a way that you can consider taking advantage of. And their fundamental story is somewhat more tangible. One in particular is worth paying close attention to, for multiple reasons. 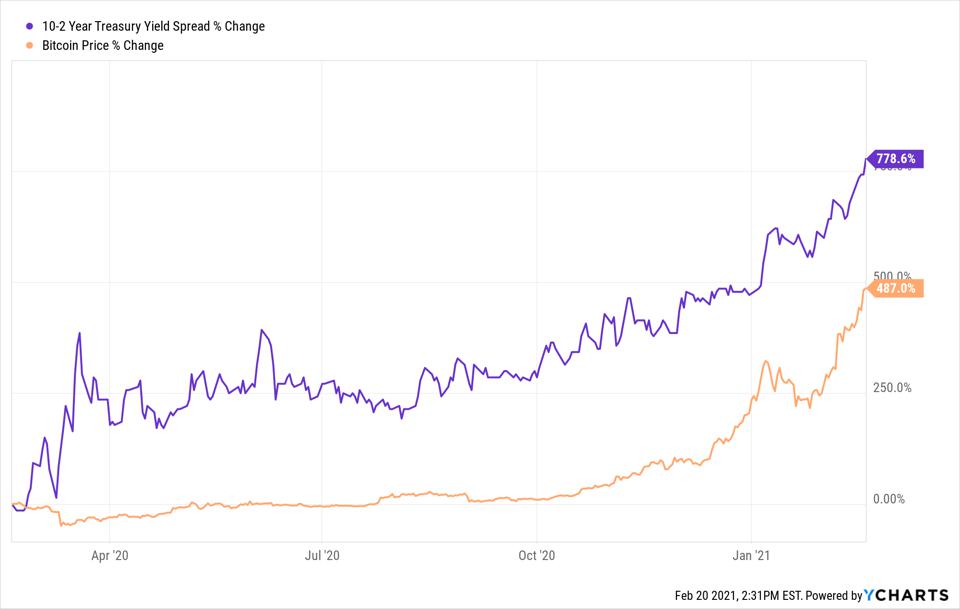 The chart above shows that gigantic move in Bitcoin, most of which occurred since last autumn. That’s the orange line. You’ll also notice a purple line that has increased in value by much more than Bitcoin over the same time period.

And, like the spike in the price of Bitcoin, most of this move has taken place since last autumn. Yet I suspect the investors who most need to follow it are largely unaware.

The purple line is the growth of the spread between the 10-year U.S. Treasury Bond and the 2-year U.S. Treasury Note, or the “10-2 spread” for short. In other words, this measures how much more yield you get for a 10-year bond versus a bond that matures in just 2 years.

Now, you can’t invest in the 10-2 spread directly as an asset, at least not easily. However, that’s not the point. The key to retired and pre-retired investors is that the bond market is telling us something. Or rather, it is telling us a few things:

Rates on long-term bonds are climbing, regardless of how much the Fed continues to suppress the short-term rates they control

Translation: the bond market doesn’t care what the Fed is doing. It sees more risk of inflation, and it is taking action on its own. For what it’s worth, the size of the bond market dwarfs that of the stock market. So we need to take notice.

This move may be starting to crush your bond investments, and your 60/40-type portfolio

Investment managers developed a dangerous habit over the past decade. In a search for yield, they moved toward owning longer-term securities and lower-quality securities. The latter are still being protected by the Fed, who has been buying some lower-quality bonds to support that market during the pandemic. But if the Treasury market falters, it’s not hard to imagine a domino effect on corporate and junk bonds.

Eventually, this could be a boon to retired investors

10-year U.S. Treasuries yield about 1.3%. That is a far cry from where retirees could be comfortable parking a chunk of their savings to earn income from. However, just like the stock market, the bond market has a history of going on “runs” like this.

And, as a contrarian investor, the best reason to follow this closely is that it seems investors are down-playing what’s happening. Wall Street forecasters tend to be bunched around 1.5% or so as the destination of this move up in the 10-year rate.

That’s why I am looking out for the potential to go to the 2-3% range faster than the mainstream expects. If we get to the upper end of that range and inflation is not the runaway variety, that might offer the first glimpse of hope for eventually using bonds as a long-term retirement investing tool again. It’s early, but not too early to keep an eye on this.

This IS an investable “event,” if you have the tools and know how to use them

There are ETFs that are designed to profit when interest rates rise, or when bond market volatility rises. For those trained in using options, that market also has some ways to try to capitalize on rising bond rates. So, while many investors look at bonds as a buy-and-hold asset class with minimal return, the conclusion is clear.

Bonds are a potentially dangerous asset to hold the traditional way, given low but rising rates. But as one of many tools in the investor’s toolbox, there are ways to potentially profit from the rare, current conditions and events we are seeing in the Treasury Bond arena. This is one of many “tactical” areas investors should seek to learn more about, in the era of sky-high stock valuations and Bitcoin mania.

Related: Is This Stock Market Bubble Really So Bad?