What Inflation Means for Bond Investors

Throughout 2021 one of the biggest worries for investors, business owners, and policy makers has been the return of inflation.  Long dormant, inflation has surged as markets and economies recover from the COVID-19 pandemic. Inflation may be hotter than it looks and it may get worse before it gets better.   This raises several questions:

FACT: The current U.S. the inflation rate, as measured by the consumer price index, came in at 5.4% in June-the fastest pace in nearly 13 years. The core CPI, which omits volatile food and energy prices, rose 4.5%, the sharpest move for that measure since September 1991 and well above the estimate of 3.8%.

Now, let’s look at some drivers of this inflation data.

Both supply and demand factors have driven increases in prices throughout the economy, including:

While the causes of inflation are many, we believe that the effects of inflation are underappreciated or poorly understood.  With inflation being largely irrelevant over the last 40 years, this isn’t a surprise.  However, it might be time to revisit some of the lessons of Economics 101 as inflation returns.

Effects of Inflation: Hitting the Pocketbook

Most people know the textbook definition of inflation as a general rise in prices.  That said, many people struggle to understand how seemingly small increases in prices can compound over time.

In order to put this into a real-world context, let’s examine the price of a gallon of gas over different time horizons and inflation forecasts.  Assume that today the gallon of gas costs $4.

Over short time frames, modest differences in inflation rates have a negligible impact on prices.  The difference between 2% and 7% inflation after one year on a $4 gallon of gas is $4.08 versus $4.28- literally pocket change.

However, if one extends these price increases over three, five, or ten years, the differences in inflation start to add up.

This is the situation facing many bond investors.  The vast majority of bonds offer fixed income; i.e. interest payments that do not adjust to rising prices.  If one is receiving a 2% annual yield on a $1,000 bond, the $20 annual income received does change.  Therefore, purchasing power is reduced. 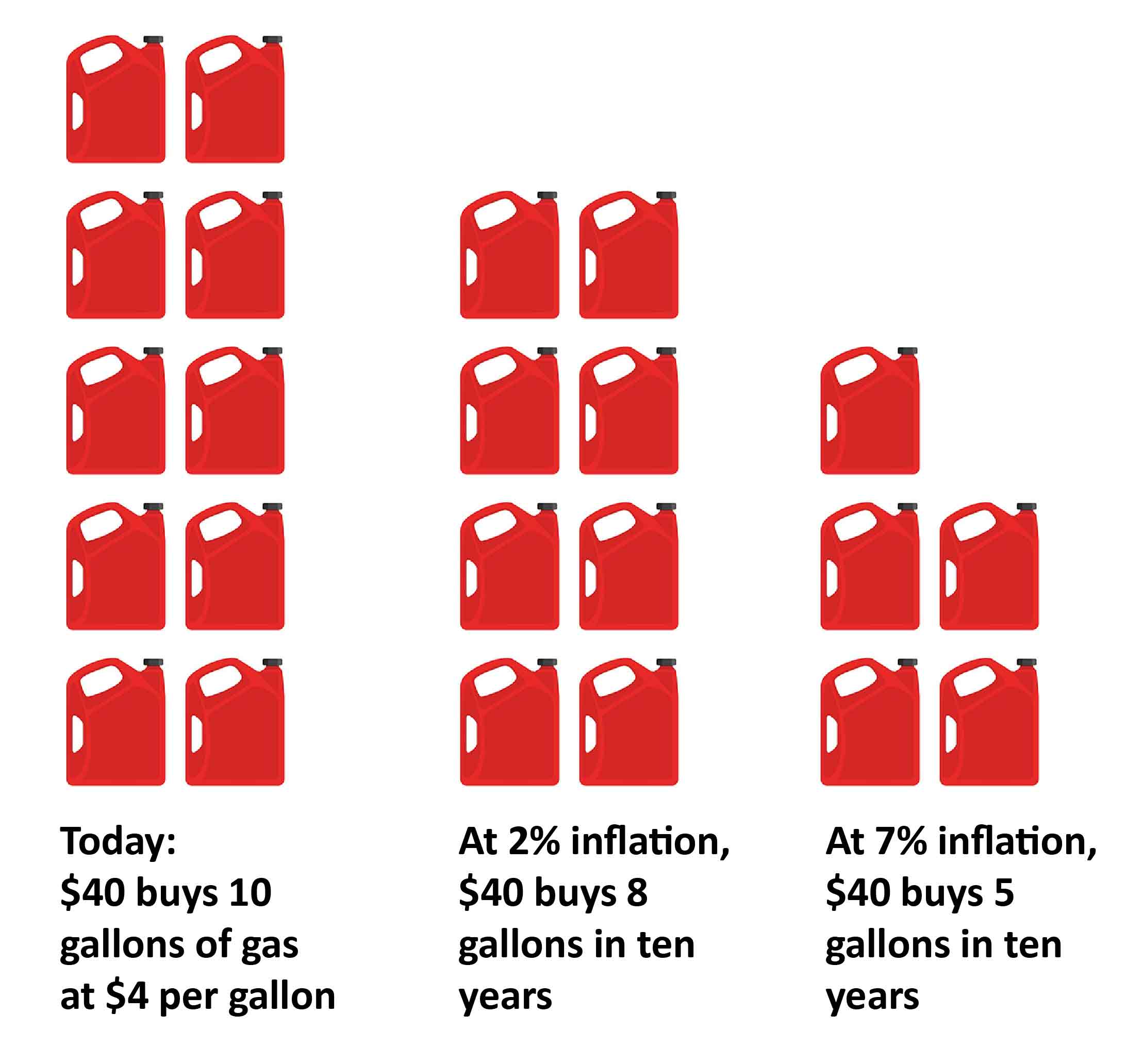 Returning to our previous example, someone could purchase ten gallons of gas today with $40.

Ten years later, if inflation is 2%, that $40 will still purchase eight gallons of gas and have a bit of change left over.  Under the 7% inflation scenario, $40 will only buy five gallons of gas.

The purchasing power of $40 has been cut literally in half, and the investor’s gas tank is half empty.

As inflation eats away at future buying power, the amount of gasoline a fixed dollar amount can buy decreases over time.

Bond Holders Painted Into a Corner

The problem facing bond holders is compounded by the fact interest rates have been kept at historic lows ever since the Global Financial Crisis of 2007-09.  The deterioration of purchasing power caused by inflation is made worse by the fact that the absolute level of yield offered by bonds has been scraping the bottom of the barrel.

To illustrate this problem, consider that at the start of the millennium the yield on a 10-year Treasury bond was around 6.5%.  A bond holder could expect a total of $650 in income payments over that ten-year holding period.  Someone purchasing a 10-year Treasury at the start of 2021 had to accept at 0.93% yield.  This would translate to a grand total $93 in income on a $1,000 investment over a decade’s time.  Factor in the idea of U.S. inflation chipping away at the value of this $93 and this bond is a losing proposition. It might be time for investors to consider bond alternatives.

Economists measure this using a tool call “net present value”.  NPV is an attempt to level-set future cash flows by taking into account inflation or the time value of money.

In this last example, we will compare two scenarios.  Scenario 1 is the cash flow of a $1,000 bond with a 5% yield in a 2% inflationary environment.  This would equate to a coupon payment to the bond holder of $50 per year.  The net present value of that $50 slowly deteriorates each year due to the inflation rate of 2%.  That final, 10th year payment has a NPV of just over $41.

Scenario 2 is a situation where the bond yields 2% but inflation is at 5%.  This means the bond pays a coupon of $20 annually, but that $20 loses value more quickly since inflation is 5%.  Unfortunately, the final coupon payment is only worth $12.28 in NPV terms.

The graph below shows the net present value of the cash flows over ten years. 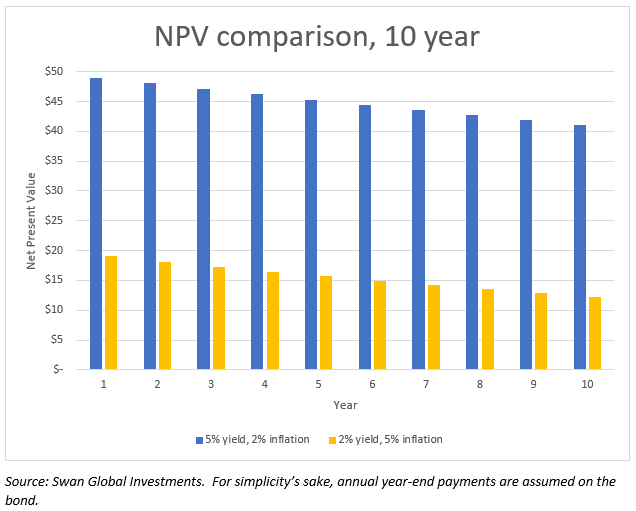 Scenario 1 is an acceptable situation, but Scenario 2 is doubly cursed.  The yield from the bonds is starting at a low base.  Making matters worse, the value of those paltry payments diminishes with the higher inflation rate.  Finally, if we tally up the NPV of the income payments and principal values of both scenarios, we get the following: 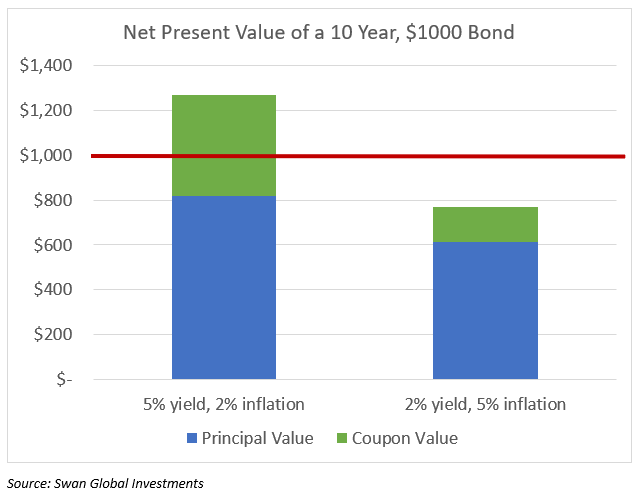 The math is simple.  In the low-yield, high-inflation scenario, the bond holder loses.  Unfortunately, Scenario 2 is much closer to today’s reality. Because of this tricky scenario, investors may want to consider bond alternatives.

A Way Forward For Bond Investors

Bonds have played a crucial role in portfolio construction for decades.  They have admirably performed a dual role of income generation and capital preservation in millions of portfolios.  However, given the new reality of low yields and rising inflation rate, that dual role is threatened. It may be time to take a look at bond alternatives.

Launched in 1997, our strategy has been helping investors for almost a quarter-century.

If you find a low-yield, high-inflation scenario worrisome, consider adding the Defined Risk Strategy to your portfolio.