This article is not a political swipe or advocating for one country over another. It’s simply some observations from a Canadian who perceives the US, China and others going through formidable change.

The world has changed and geopolitics, national economies and the environment have altered the way we trade, work and live.

We are in the midst of a Tech War just as the USA signed a comprehensive trade deal with Canada and Mexico then with China. In fact, the first salvos indicating a tech war were fired at Chinese tech giant, Huawei, supposedly over its 5G technology. Huawei is a prime example of how global tech tensions can manifest. Washington has been pressuring its allies since 2018 to keep the Chinese company's equipment out of their 5G networks.

The new tech war is a much larger problem than one might suspect. In a trade war, the exchange of goods between two countries is affected. With respect to the US and China, that represents just over a trillion dollars a year. When it expands to a tech war, it stands to disrupt and affect the entire global financial structure, the internet and everything else.

Trump hit a core nerve with his slogan "Make America Great Again" in the 2016 presidential campaign. Millions of US voters were quick to jump on Trump’s slogan because, they felt, they had lost something. Most Western countries have become nations of rampant consumers instead of builders.

This doesn't, however, solely explain the reasons for a tech war. Behind Trump's nationalism, there were calls for closure of international trade deals starting with Huawei. The specter of national security issues brought every civilized country into the fray with fears that tech in the hands of the Chinese would affect them as well. What appeared to be just a US-China rift became an issue of which country was going to dominate the entire tech sector, particularly information and communications technology.

The tech war is for "all the marbles," i.e., global domination of information and communications. This attempt at hegemony is without the leadership component part of world domination because it is impossible for one country to completely dominate the world.

Following the US companies' domination of tech by IBM and Microsoft in the 1980s, China spent billions to develop the best technologies including microchips, wireless technology, robotics and more to cease its reliance on foreign technology.

The USA's new position of nationalism spelled trouble from the beginning. Unlike the US, most countries felt the world was their trading partner. Trump started with close neighbors Canada and Mexico to espouse his new plan of nationalism. The geopolitics was easy to understand with the tri-country free trade zone.

Trump believed (and believes) that a country with vast trading, particularly in technology, simply had more leverage than others. On March 2, 2018, he tweeted: 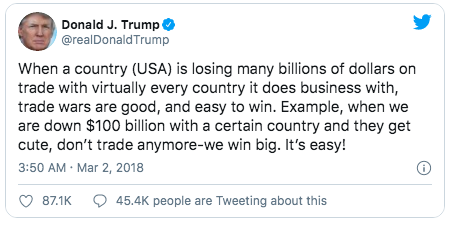 Is it protectionism or nationalism?

Probably a bit of both, as the US is hungry for new jobs and China and the EU are eyeing US markets and battling in a war of words and tariffs. The tech war puts the actual reasons into perspective. In 40 years, China went from an obscure economic market with cheap labor to the leading developers of new generation innovation including nanotechnology, biotech, internet finance, hi-speed rail and 5G.

No one country will win a trade war. In fact, all sides appear to be suffering with manufacturers and end consumers bearing the brunt of the damage. But whoever leads the world in technology will be a major force.

On the surface it appears there is a battle for nations to promote their unique nationalism, others see it as protectionism. For innovation to continue and for everyone to get in on the positive changes coming, there needs to globalization.

Some tech leaders have expressed the view that protectionism and nationalism are putting a strain on the development of tech platforms to be a global company. Life in the future will certainly be less globalized after this tech war.

Global tensions are also causing countries to view tech firms as "national sectors and not global actors," said Samm Sacks, a senior fellow at Yale Law School's Paul Tsai China Center who studies cybersecurity and US-China relations. Countries are being warned that companies operating in different parts of the world are "being asked to carry the flags of their country," according to CNN. Is it a wonder there is paranoia?

Consider the imbroglio with this year's tech darling TikTok, a Chinese company with a US CEO being seen as a threat to national security. Countries are considering banning this innocuous silly entertainment over concerns by Secretary of State Pompeo. Maybe they will look at Facebook and Twitter next - Where does it all end?

Living in Vancouver, I've seen firsthand what appears to be tech war manipulation by the US and China in the 2018 arrest of Huawei's CFO, Sabrina Meng (Meng Wanzhou) for fraud and an attempt by the US to extradite her for trial. The US used Canada to join their side of the tech war.

While Ms. Meng's case is being fought in the Canadian courts, the problem arises that other countries are being pitted against other economic partners (in this case Canada and China) putting countries in the middle of a tech war no one wants and from which no one benefits.

In 2017, Huawei surpassed US companies in semiconductor development, beating Qualcomm and Intel. 5G is at the forefront of Chinese technology and is the foundation for next gen tech like AI, machine learning and the Internet of Things. 5G will replace WiFi, IR remotes, indoor broadband and more. Huawei's new HiSilicon 7nm chips used in 5G is two generations ahead of US industry standards, and its 5G antennas are able to hold 2.5 times anyone's network capacity while using 30% less energy.

Considering this vast technological switch in dominance, nations and companies are being forced to chose sides. As CNN said in July 2020, "Nations and companies around the world are being sucked into a running battle over the future of technology between the United States and China, forcing them to choose sides in a conflict that is fracturing global supply chains and pushing businesses out of lucrative markets."

I can see how China and the US desire tech dominance or at least self-reliance, but I'll hold Canada up as an example of a better way, as the country has had a good relationship with both countries until Trump's recently imposed aluminum tariffs.

It seems to me that we need to encourage our leaders to overcome this ever-growing divide between us. Business does not have to be a wedge to stop the sharing of technical innovation and trade. The US and Canada should try to recover our former friendship and realize we need each other before we all become victims of the tech war.

I'd like to suggest that the leaders and consumers detach themselves emotionally and learn how to collaborate. Once the nation builders are done, they will have to collaborate with the rest of the world.

Perhaps any detente will have to wait until the US presidential elections are over, but we all have too much to share!

Related: What the Rise of Fractional Trading Says About Modern Investors

Gary is CEO of The Syphon Institute for Quantum Inc., Bizzo Management Group Inc., and Bizzo Integrated Marketing Corp. in Vancouver. London-based Richtopia placed Bizzo on the Top 100 Global Influencers in the World for 2018. He is an Adjunct Professor of Integrated Marketing & Communications as well as Consumer Behavior at the New York Institute of Technology, MBA School of Management (Vancouver Campus). Gary can be reached at ceo@garybizzo.com.