How the EUR/USD Affects Miners; Which ETF Will Suffer More?

It’s all connected. The Eurozone’s underperformance boosts the USD, thus placing pressure on gold and the ETFs. So, which ETFs will suffer most?

A large part of yesterday’s free version of the analysis focused on the Eurozone’s economic outlook and how it affects the precious metals. We’ll eventually get to Europe again later in today’s analysis, but let’s first examine gold related ETFs, namely the GDX and GDXJ. How low can they go? That will depend on the general moves in the stock market. 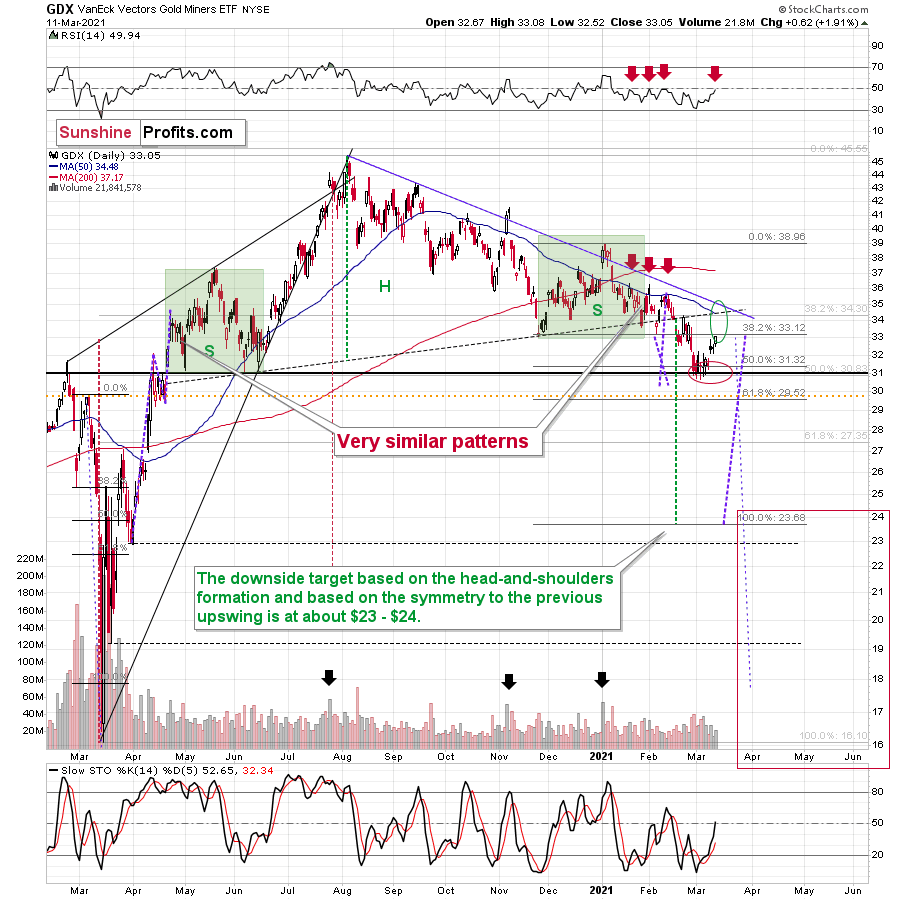 The GDX ETF didn’t move to the strongest combination of nearby resistance levels, but it did flash a few bearish signs, anyway.

The resistance that it reached was notable as it moved to its November 2020 low. Consequently, “it makes sense” for the mining stocks to have topped here.

In yesterday’s (Mar. 11) regular analysis , I wrote the following about the above chart:

Miners generally paused yesterday (Mar. 10), which is quite natural after a sharp daily rally. They closed the day slightly higher, but the RSI is not yet at 50 and the volume that accompanied yesterday’s small move up was nothing to call home about. It was just a pause, and the preceding short-term move is now likely to continue.

Yesterday’s volume was nothing to call home about, but the RSI moved to 49.94 – close enough to 50 to be viewed as a sell signal.

Moreover, please note that while spike-high volume would be a reversal indication, it’s not required for a top to form. The recent small tops formed without high volume.

Consequently, it could be the case that the top in the mining stocks is in, and that by selling GDX at $32.96 yesterday (March 11) we exited the long positions (and entered short ones) practically right at the top – a week after buying in the $30.80 - $31 area .

Before anyone asks, yes, miners were strong relative to gold yesterday, but it was practically the only thing that was positive about yesterday’s session and the USDX’s performance along with gold’s weakness seem more important.

Please keep in mind that every now and then miners very briefly (!) fake their strength (or weakness) relative to gold right before the reversal. The 2016 rally started with a fake breakdown and fake underperformance of gold. So, while the continuous underperformance of miners (compared to gold) is very often bearish, a single day of strength or weakness might be a trap.

How low can the GDX ETF go? Our final downside target area ($15 – $24.5) is quite broad, because a lot depends on what the general stock market will do. I’ll be looking at gold for the key signs along with a few other factors (including the Gold Miners Bullish Percent Index ) and determined the buying opportunity based on them – not necessarily based on the price of the GDX or GDXJ by itself.

Yes, this target is quite low, and thus might appear unrealistic, but let’s consider the following:

Considering all three above factors it’s clear that a move to even the 2020 lows is not out of the question.

Speaking of the GDXJ, let’s take a look at its chart. 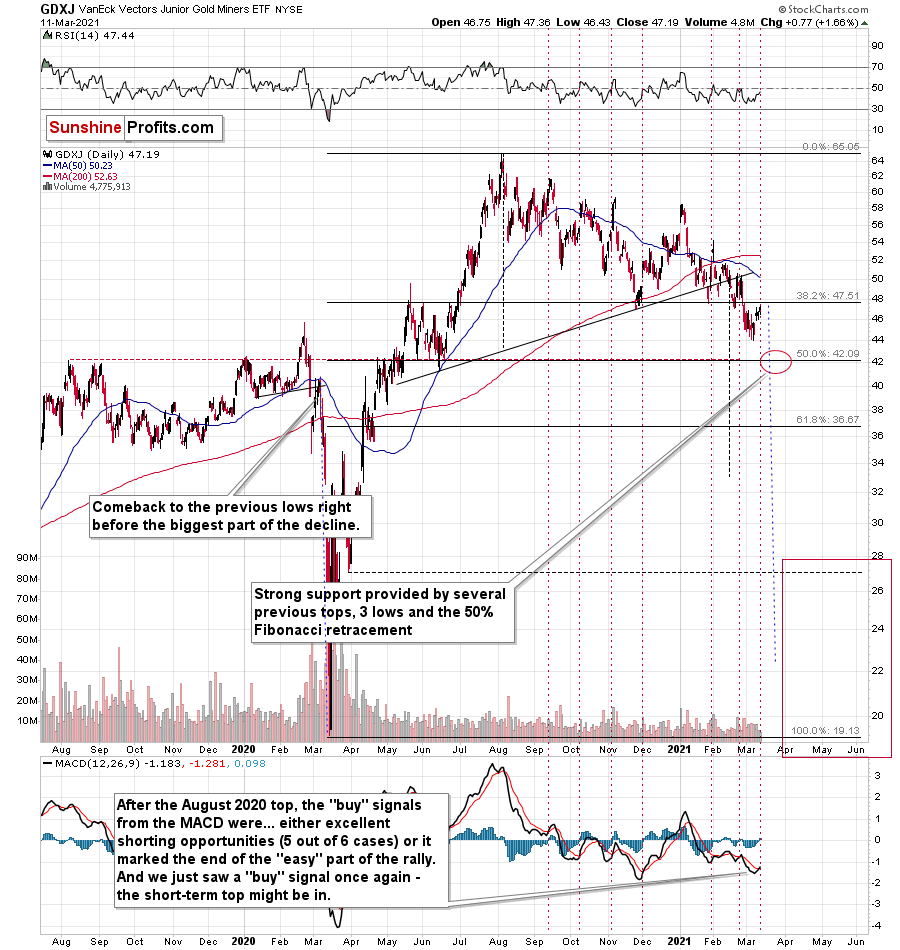 The most interesting thing on the above chart is a big red warning flag for beginner investors . The flag reads: “verify the efficiency of a given tool on a given market, before applying it”.

The bottom part of the above chart features the MACD indicator . Normally, when the indicator line (black) crosses its signal line (red), we have a signal. If it’s moves above the signal line, it’s a buy sign, and if it moves below it, it’s a sell sign.

If one actually looks at what happened after the previous “buy signals” in the recent months, they will see that in 5 out of 6 cases, these “buy signals” practically marked the exact tops, thus being very effective sell signals! In the remaining case, it was a good indication that the easy part of the corrective upswing was over.

I’m not only describing the above due to its educational value, but because we actually saw a “buy signal” from the MACD, which was quite likely really a sell signal. Today’s pre-market decline in gold (and the move lower in the GDXJ in the London trading) seems to confirm it.

So, how low can the GDXJ go? As it is the case with the GDX, a lot depends on the general stock market and our final target area is quite broad (between $18 and $26), and the key indications will come from other markets and the way they behave relative to each other.

There’s an interim (and strong) support provided by the $42.5 level, which might trigger a corrective upswing, but since we have just seen one, it’s far from being certain that we’ll see another corrective upswing so soon. This could be another opportunity to profit on a long position in the gold miners , but we can’t say that we’ll definitely go long at that time – at least not based on the information that we have available right now. Naturally, we’ll keep monitoring the situation and send out regular (and intraday) Alerts with details as more information becomes available.

Having said that, let’s take a look at the market from the more fundamental angle.

As you’ve likely noticed, I spend a lot of time analyzing the EUR/USD – that’s because the currency pair accounts for nearly 58% of the movement in the USD Index. And due to Europe’s economic underperformance and the relative outprinting by the European Central Bank (ECB) , a sharp rerating of the EUR/USD could be the engine that drives the USD Index back above 94.5

For some time, I’ve warned that the ECB’s bond-buying program was likely to accelerate. On Jan. 22 , I wrote:

The ECB decreased its bond purchases toward the end of December (2020), Then, once January hit (2021), it was back to business as usual. As a result, the ECB’s attempt to scale back its asset purchases was (and will be) short-lived. And as the economic conditions worsen, the money printer will be working overtime for the foreseeable future.

And with Eurozone fundamentals continuing to deteriorate, I added on Mar. 9:

The ECB’s splurge could begin as early as this week. With Eurozone bond yields already on the rise and the debt-ridden economy unlikely to tolerate a sustained ascension, the ECB’s weekly PEPP purchases (pandemic emergency purchase program) are likely to accelerate.

Well, on Mar. 11, the ECB stuck another fundamental dagger into the heart of the euro. Lamenting the rise in European bond yields, ECB President Christine  Lagarde told reporters that “market interest rates have increased since the start of the year, which poses a risk …. Sizeable and persistent increases in these market interest rates, when left unchecked, could translate into a premature tightening of financing conditions.”

And why is she so worried?

Well, if you analyze the chart below, you can see that Goldman Sachs’ Financial Conditions Index (FCI) has moved moderately higher. For context, the FCI is derived by calculating the weighted-average impact of the ECB’s overnight lending rate, sovereign bond yields, corporate bond spreads, equity prices and cross-border trade conditions. 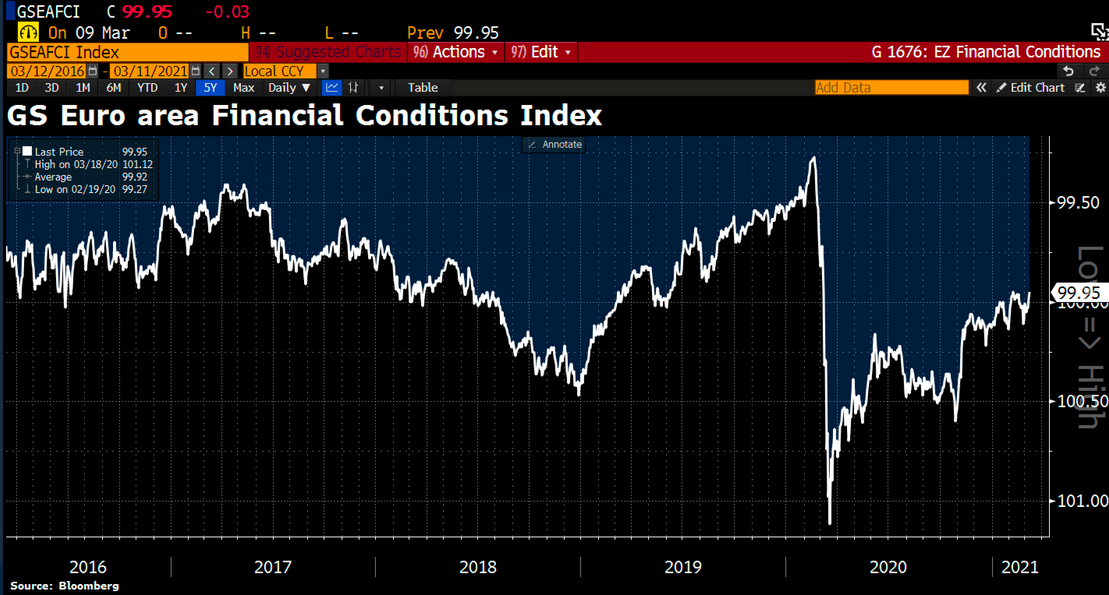 So, what was the ECB’s response?

As expected, the ECB’s weekly PEPP purchases will now “be conducted at a significantly higher pace.”

Far from news for those that have been paying attention, Europe is extremely allergic to higher bond yields. Just yesterday, I wrote that rising Eurozone interest rates remain extremely unlikely. And because a picture is worth a thousand words, notice the reaction from the German 10-Year Government Bond yield? 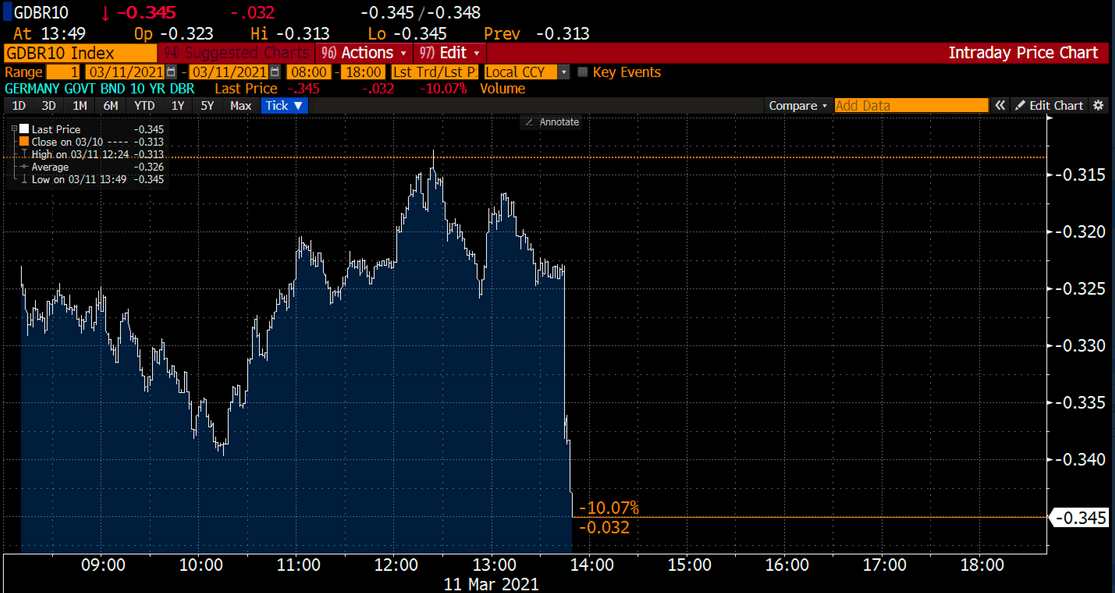 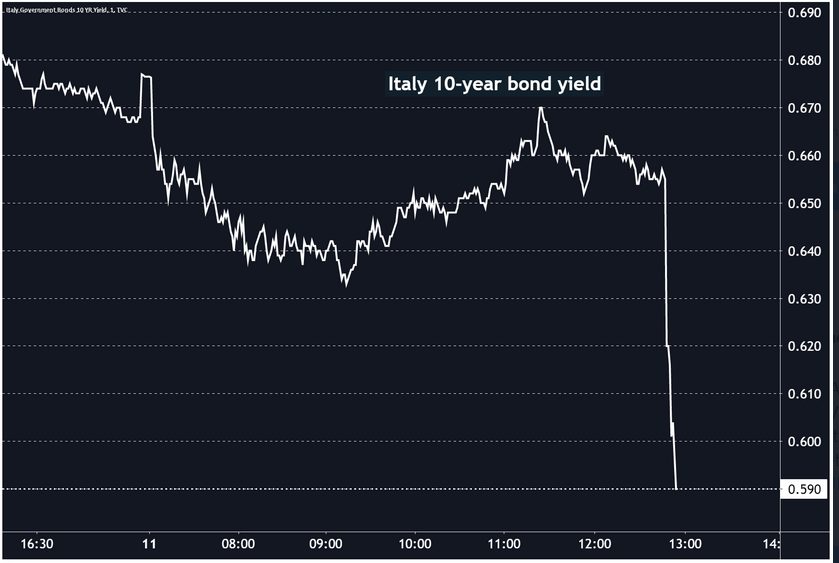 In stark contrast, the U.S. 10-Year Treasury yield actually rallied on Mar. 11 . And demonstrating material outperformance, since bottoming on Aug. 6, the benchmark has raced past the German 10-Year Government Bond yield.

Wishing, wanting and hoping, European lawmakers anticipate that more than €300 billion in excess household savings will lead to an economic renaissance in 2021. However, when you break it down, the balance only amounts to 4% of annual household income. Thus, the short-term bounce (if any) won’t last very long.

And to that point, if you analyze the chart below, you can see that excess household savings in the Eurozone are now less than $84 billion. 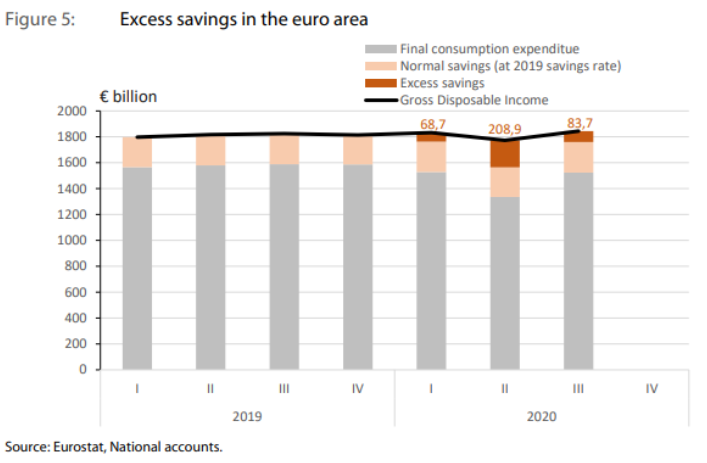 To explain, the brown bars above represent excess household savings in the Eurozone. And from the second-quarter to the third quarter of 2020, European households have spent nearly 60% of their Q2 excess savings . Thus, at this pace, there won’t be any “excess savings” left.

Also signaling economic weakness, the slump in Eurozone retail sales (released on Mar. 4) shows that consumers are spending their money on necessities and not discretionary items that boost GDP. 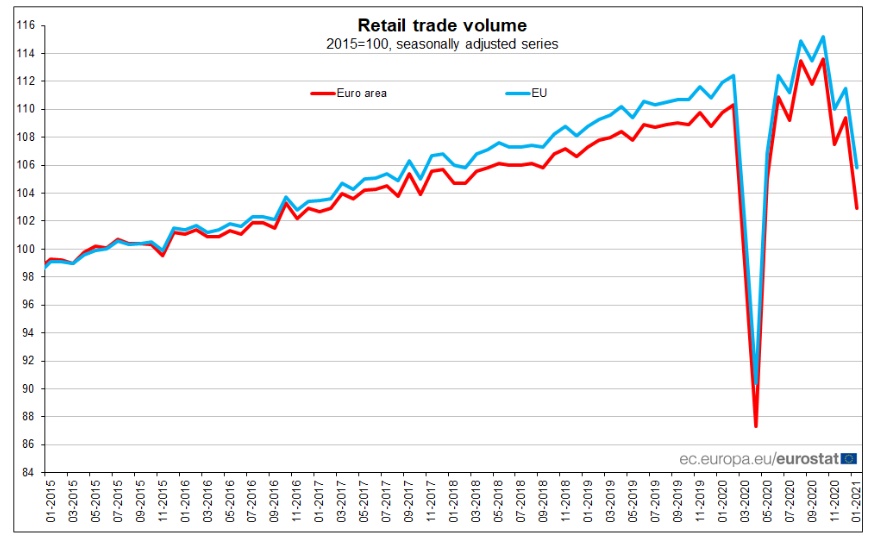 Falling off a cliff, Eurozone retail sales declined by 5.1% in January. Even more revealing, France (– 9.9%) – which is projected to be a beacon of Eurozone growth in 2021 – underperformed the bloc average, with December’s momentum quickly fading in January. 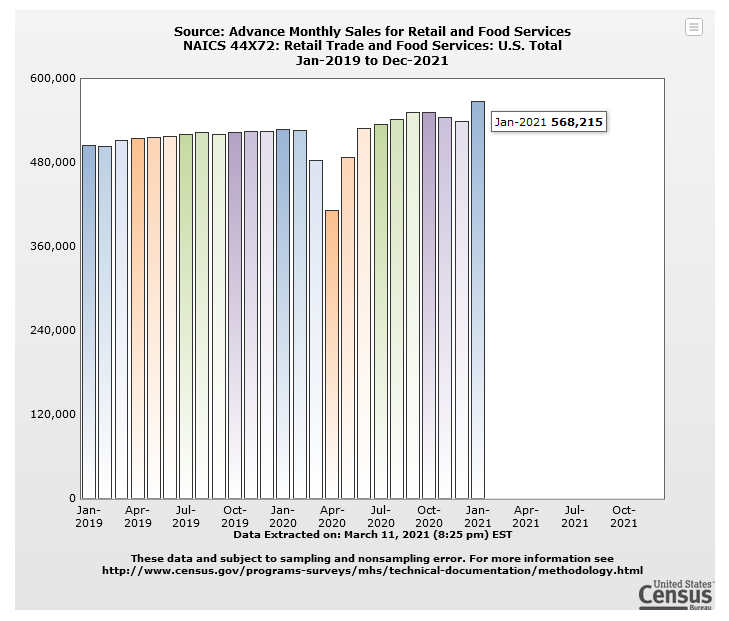 And while fundamentals continue to chip away at the EUR/USD, activity in the futures and options markets are signaling a shift in sentiment. Remember, narratives overpower fundamentals in the short-term, thus, changing opinions is like trying to fill a glass from a dripping faucet. However, the pressure may be rising.

Case in point: the latest Commitments of Traders (COT) report shows that non-commercial futures traders (speculators) have increased the EUR/USD short positions by more than 6,500 contracts, while reducing their EUR/USD long positions by nearly 5,900 contracts (the blue box below). 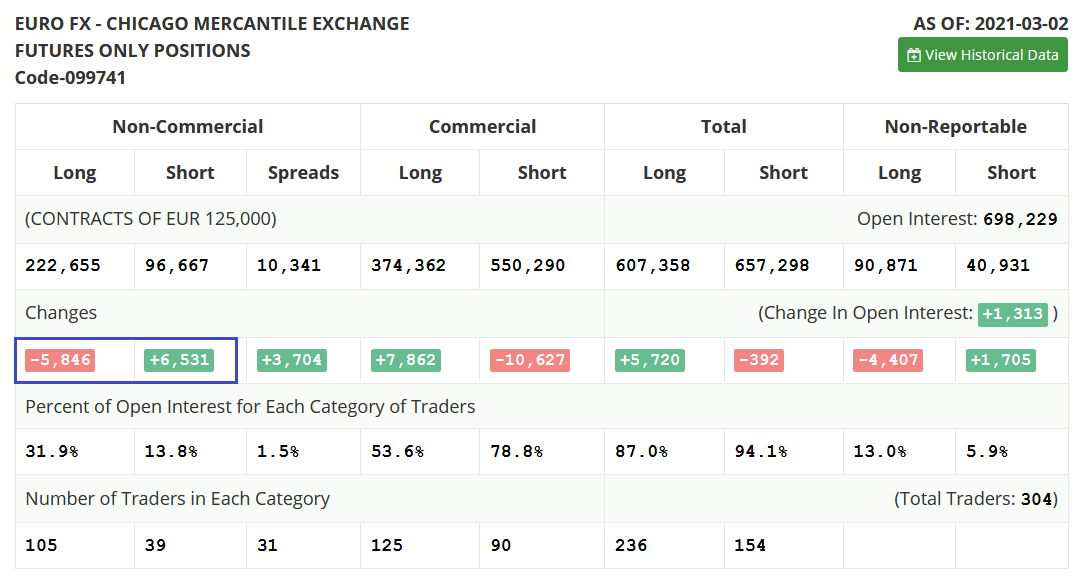 Even more interesting, EUR/USD futures’ volume exploded on Mar. 10. If you analyze the right side of the chart below, you can see that an abnormal number of contracts exchanged hands.

And while the volume data doesn’t tell us whether these are bullish or bearish bets on the EUR/USD, the CME Group’s options data signals that it’s the latter. If you analyze the graphic below, you can see that there is little open interest for bullish bets of 1.1950 or above.

In stark contrast, there is plenty of open interest for bearish bets of 1.1850 or below – with 1.1750 the most popular (642 contracts still outstanding).

In conclusion, the EUR/USD continues to swim against the fundamental current. And while daydreams of a Eurozone economic boom propel European equity bourses to new highs, the misguided optimism has also lifted the euro. However, with the USD Index already verifying its medium-term breakout and a boost from the EUR/USD likely to push it beyond the 94.5 level, the PMs medium-term outlook remains profoundly bearish. And while their correlations with the S&P 500 remains supportive in the short-term (which I predicted would be the case this week), a severe correction of U.S. equities increases the likelihood of a significant slide over the next few months.