Advisors, It's Time to Talk Taxes with Wealthy Clients

Admittedly, there's still a lot of moving parts here, but at least for now, it looks like the Biden Administration and Republicans have an infrastructure agreement in place.

Obviously, things can change on Capitol Hill and that's particularly true in today's bitterly partisan environment, but it looks like some infrastructure spending will be happening. Granted, it's on a much more watered down scale than the White House was hoping, but those are the breaks when the climate is contentious and Congressional majorities are razor thin.

Two things about the infrastructure package, assuming it becomes law. First, it's a decent enough starting point, but much, much more needs to be spent on this front in the U.S. in the years ahead. That's good news for infrastructure-interested clients.

Second, all the proposal that could eventually wind up on President Biden's desk is scaled back from what he was looking for, it still needs to be paid for. How? Glad you asked.

Tax Hikes On, Not Off the Table

Many advisors aren't certified public accountants (CPAs), but advisors can add considerable value for clients by having an in-house CPA, or at the very least, being knowledge of the current tax landscape and tax-advantaged investment strategies.

Now's an ideal time for advisors to display that value because assuming the aforementioned infrastructure bill comes to life, there's a reasonable chance corporate taxes will go up as will capital gains levies on wealthy individuals and families. Like the infrastructure bill itself, President Biden's tax-hiking efforts are likely to be diluted and face some opposition in Congress. That doesn't mean the effort is dead.

Advisors want to get ahead of this conversation because, as the chart below indicates, corporate tax increases will affect sectors, including some popular groups, in differing ways. 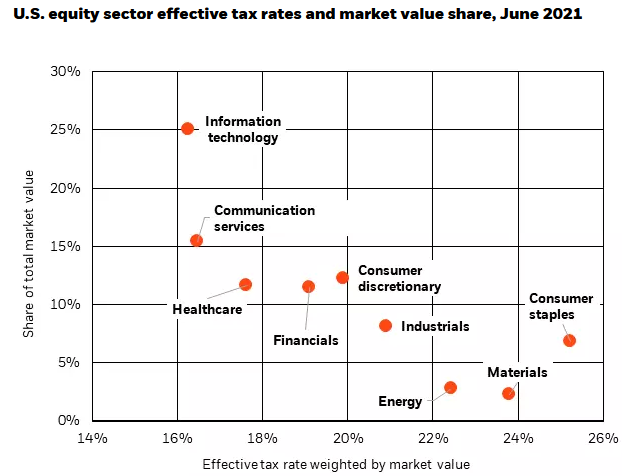 “Sectors with the lowest effective tax rates – or the actual rate paid after taking into account various tax breaks and deductions – have the most to lose, all else being equal. Information technology (IT), the largest sector on the S&P 500 Index, has a relatively low effective tax rate just under 17%. Energy, materials and consumer staples have tax rates above 20%,” according to BlackRock.

Basically, the message is look at the chart above and the higher a sector's dot, the more vulnerable it is to a rising global minimum tax – something that's being considered by the U.S. and other major economies. It's possible lower-than-expected tax increases in the U.S. could augment some of the global tax increases, but clients will demand more preparation than mere hope.

How to Beat Tax Hikes

Fortunately for advisors, there are multiple options for combating higher taxes. First, and this isn't an endorsement of passive over active, there's the exchange traded fund vs. mutual funds debate. ETFs are already on pace to topple last year's inflows totals and a big reason is tax increase speculation.

Simply put, the vast majority of ETFs, even the actively managed ones, don't lob off capital gains taxes. Mutual funds do and if those taxes rise, even the wealthiest of clients will want to find ways of averting those levies. Enter ETFs.

Second, advisors can discuss with clients international allocations because many ex-US developed markets already have higher taxes than the U.S., are playing catch-up in the reopening trade and trade at discounts to the S&P 500.

“The U.S. has led the developed world’s economic restart – together with the UK – and its growth looks to be peaking as the restart broadens out,” adds BlackRock. “We see the potential for other DM markets, such as Europe and Japan, to pick up the baton and benefit more from the restart trade. These markets, which already have higher taxes and more regulations than the U.S., face more limited scope for additional taxes and regulation, in our view.”

How to Keep Clients on the Right Disruptive Growth Track

New ETF Focuses on LGBTQ Principles, But Has Appeal for Variety of Clients