What Is ‘Sustainable Investing’?

I have a few friends who are climate deniers. That’s fine, they are entitled to their views, but I cannot accept that view. There’s too much science that shows the world is changing. Their argument – those who believe this is not a climate emergency – is that it’s just Earth going through its’ regular cycle of change. Earth heats and cools through millennia. Live with it.

My argument is that I don’t care about the climate. And I don’t. I care about animals. I care about the fact that 60% of Earth’s biodiversity has been wiped out in the last half century. That’s where my heart lies. In fact, the impact of humans on wildlife is a bigger issue for me than anything to do with climate change. Eradicating rhinoceros, elephants, lions, orangutan and more. That’s my issue with humanity. It’s nothing to do with climate change; it’s all to do with humans who destroy habitats.

Enough of a rant. Start of a change.

Regardless of my friends who deny climate change, ESG is definitely becoming a thing. In fact, there are two very recent stand-out moments that show this is a thing. The first is Deutsche Bank being called out for greenwashing. It has impacted the company big time – their share price dropped by almost a fifth overnight … 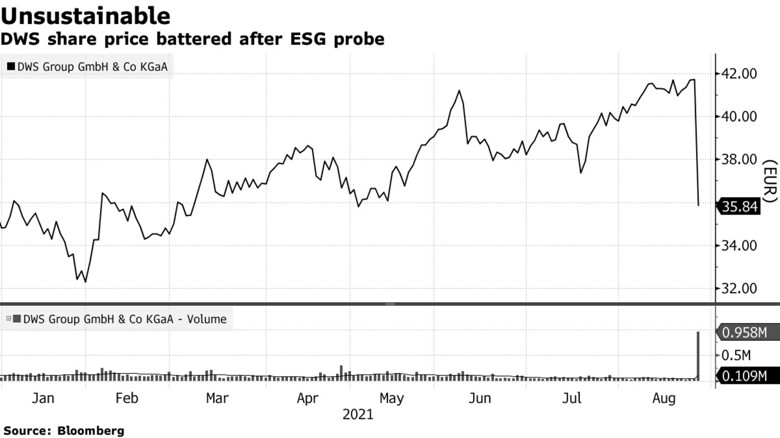 … and the issue? “Authorities in the U.S. and Germany began a probe into allegations that the firm exaggerated the environmental or social credentials of some ESG-labelled investment products” (Bloomberg, August 2021).

In a similar vein, I don’t know if you saw it, but the former CIO of Sustainable Investing at BlackRock, Tariq Fancy, has written a series of essays on Medium decrying the companies policies (something I’ve discussed in depth back in 2019).

You can read the full 40-page essay here. It’s a fairly long and rambling essay to be honest, talking about lockdown and dog walking, but there are a few standout paragraphs I liked, so I’m sharing them here as using digital and finance to improve society and the planet is the focus of my latest business venture. Tariq sums is all up as sustainable investing. What is sustainable investing?

Sustainable investing is a confusing area of finance that often means different things to different people. Most of the time it means building investment portfolios that exclude objectionable categories, such as ‘divesting’ of fossil fuel producers in an apparent attempt to fight climate change. Unfortunately, there’s a difference between excusing yourself of something you do not wish to partake in and actively fighting against something you think needs to stop for everyone’s sake. Divestment, which often seems to get confused with boycotts, has no clear real-world impact since 10% of the market not buying your stock is not the same as 10% of your customers not buying your product. (The first likely makes no difference at all since others will happily own it and will bid it up to fair value in the process, whereas the second always matters, especially for a company with slim profit margins and high fixed costs.) If it’s not obvious why there’s little real-world impact, think of it this way: if your sports agent sells your interest in a dirty player who is known for recklessly endangering fans, but that player remains on the court (under new ownership), have you really made any difference?

Put another way: would you be happy if the Olympic Games were full of drug-fuelled athletes who bucked the system?

The Principles for Responsible Investment, a United Nations-supported initiative, has over 2,000 signatories representing over $80 trillion in investment assets that consider ESG factors in just this way. Unfortunately, there’s no clear definition of what that means — and much of it is believed to be a surface-level, box-ticking compliance activity.

This is something I am campaigning for, in that most of the companies claiming to be green are just doing it as a PR thing and not as a company thing.

Most of what the ESG cheerleaders wanted to believe should matter for portfolio managers did not matter in reality. It was no one’s fault: the reality is that much of what matters to society simply doesn’t affect the returns of a particular investment strategy. Often this is because of the timeline of the underlying investment: many strategies have a very short time horizon, meaning that longer-term ESG issues aren’t particularly relevant.

This is what the Long Now and Long Finance is trying to solve. If you haven’t come across the Long Now, click here and here.

In fact, it’s interesting in that the thrust of the Long Now and community currencies is to make it expensive to hold funds and cheap to invest in long-term projects. Tariq touches on this theme where talks about a carbon tax, as promoted by Nobel Prize Winner in Economic Sciences William D. Nordhaus, in this Nobel Prize lecture in December 2018:

“We have to get billions of people, now and in the future. Millions of firms. Thousands of governments… to take steps to move in the direction we want. And the only way you’re going to do that effectively is to increase the price of carbon.” The idea behind a carbon tax is simple: if you make the entity creating the negative externality pay the costs of it (say, through a pollution tax), their incentives change and thus their behavior changes — and our existing system of business, markets, and competition starts to innovate toward greener alternatives.

Tax the people abusing Earth. Simple idea, but hard to implement. As with all taxes, there’s always a way around them. In fact, it’s interesting to note that Tariq talks about talking with BlackRock’s portfolio managers and this quote is particularly noteworthy:

“I believe in climate change. If we had a price on carbon, I’d lower my carbon footprint overnight — and so would everyone else. But it makes no sense to do it alone and put myself at a disadvantage, and it’s not what I’m legally supposed to do or paid to do.” BlackRock Portfolio Manager

Updating the rules would make it easier for the players in the game to refocus on what they do best: scoring as many points as they can within a certain set of rules and regulations. It also removes business leaders from attempting to play a critical role on pressing social issues for which they have neither the experience, the democratic mandate, nor the financial incentives and legal latitude to carry out effectively. Updating the rules would mean players who already play clean finally get a leg up on their competitors as a reward for doing the right thing early.

So, the market can change the rules, with government enforcement? Yes or maybe no.

In my role at BlackRock, I was helping to popularize an idea that the answer to a sustainable future runs through ESG and sustainability and green products, or in other words, that the answer to the market’s failure to serve the long-term public interest is, of course, more market. A bit like the NRA’s traditional answer to mass shootings and related concerns around public safety — the answer is more guns, of course — we were pushing solutions and products that would result in no real change, and only served to distract us from what actually does work.

Tariq concludes by saying that:

The goal of this essay is to clearly communicate the dire need for urgent government action to address systemic problems, not to spell out the specific policies any government must enact: there’s no shortage of expert policy ideas to address these problems, and most will vary in the details from country to country. But our experience with COVID-19 provides a useful template for action with respect to the climate crisis: flatten the curve with one hand, assemble an escape plan with the other.

I guess this paragraph from his 40 pages stays with me the most:

Reacting instead with denial, loose half-measures, overly rosy forecasts lulls us into a false sense of security, eventually prolonging and worsening the crisis. And yet Wall Street is doing just that to us today with the far more dangerous threat posed by climate change, craftily greenwashing the economic system and delaying overdue systemic solutions, including those intended to combat rising inequality and the insidious political risks it creates. It’s clear to me now that my work at BlackRock only made matters worse by leading the world into a dangerous mirage, an oasis in the  middle of  the desert that is burning valuable time. We will eventually come to regret this illusion.

Why that paragraph? Because we are deluded if we think the financial system will rectify the issues we face on Earth. It takes the financial system and governments to do this, co-ordinated and in harmony, working together to change corporate behaviours, society’s attitudes and individual activities.

Sure, you can bin your plastic in the plastic bin .. but what are you doing to ensure your money is truly green?

In conclusion, another line I noted is where Tariq talks about how he left BlackRock and resigned. The reason? Trying to create real-world social impact through sustainable investing felt like pushing on a string.

Try it. It doesn’t work.

Related: Points of Emphasis When Discussing ESG With Clients