Renewable Energy Infrastructure Is at an Inflection Point

Renewable energy infrastructure, especially wind and solar, has experienced a dramatic decline in cost and is now competitive with fossil fuels without the need for subsidies. This decline, combined with increasing global efforts to reduce CO2 emissions, is leading to an acceleration in the transition to renewable energy sources. We see a massive global growth opportunity in the rapidly expanding universe of globally listed infrastructure companies that are capitalizing on this trend.

Renewables is the fastest-growing sector within energy infrastructure. Investment in new renewable energy capacity is now outpacing investment in conventional power by at least 2:1, with spending approaching $300 billion per year on wind and solar alone, according to Bloomberg New Energy Finance. Why the tremendous growth? No longer driven primarily by subsidies, renewables investment is driven by market demand from consumers of electricity, who are buying renewable energy on an unprecedented scale. In fact, based on the Energy Outlook 2019 “Rapid Transition” scenario published by BP (formerly British Petroleum), renewables could overtake natural gas and crude oil to become the largest source of primary energy consumption by 2040 (Figure 1). 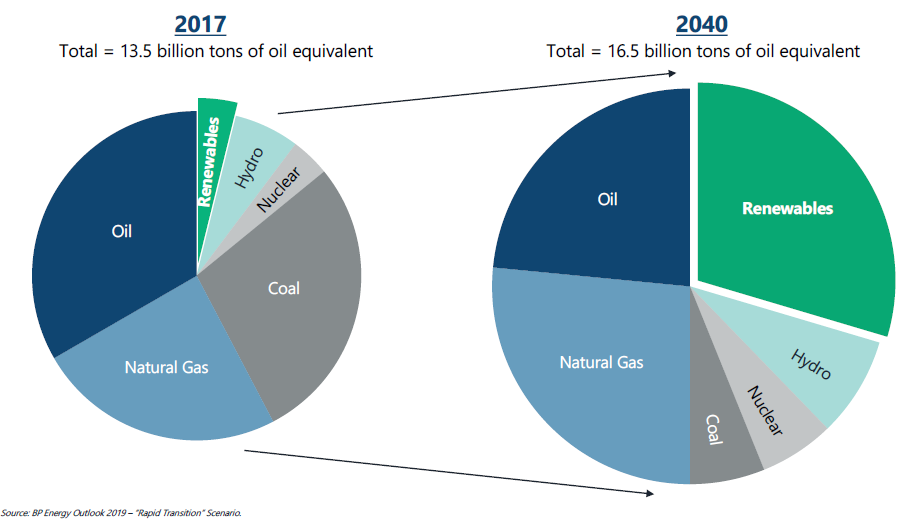 While falling costs are a key driver of the acceleration in renewables investment, growing demand for clean energy – and the global “electrification” of activities like transportation and heating – is fueling spending. In the United States, individual states’ renewable energy targets, and the changes their utilities are making, are a key source of domestic demand growth. Additionally, more than 240 major global companies have pledged to go “100% renewable.” Renewable infrastructure companies signed almost 20 gigawatts of power purchase agreements (PPAs) to sell electricity to private corporations from wind and solar projects in 2019. Internationally, 170 countries have renewable energy targets in place – and 195 countries have signed the Paris Agreement – representing a massive source of mandated demand growth in coming years.

Historically, buying renewable equities in public markets meant buying technology companies, equipment makers, and other non-infrastructure businesses. Today, however, there are a growing number of global infrastructure companies that own “hard assets” within the renewable space, like wind and solar generation, hydroelectric power plants, electricity storage and electrical grids. The global renewable infrastructure investable universe is now over 90 companies with a market capitalization of $900 billion – generating an attractive combination of yield and growth from clean energy assets. These companies also tend to be technology agnostic – developing a wide variety of wind, solar and battery projects.

As an investor in renewable energy infrastructure since 2013 – and an investor in energy infrastructure since 1997 – we believe renewable infrastructure companies present a compelling investment opportunity. The “best” assets or companies have one defining characteristic that mirror those of other successful infrastructure companies: they generate stable cash flows under long-term, inflation-protected contractual arrangements, often with decades of revenue visibility. Renewables have no fuel costs, relatively low operating costs, and their cash flows tend to exhibit little or no correlation to commodity prices or economic cycles. We believe these attributes make renewable energy assets attractive investment opportunities among infrastructure investors.

Where does all of this leave us for the future? Simply put, we believe the world is in the early stages of a major global energy transition which will lead to a significant shift in global energy over the next few decades and an acceleration of investment in renewables. We believe renewables will drive the future growth of how energy is produced and consumed; and will be a significant part of the global energy mix along with fossil fuels and other sources of energy. As a result, renewable energy infrastructure is emerging as a standalone asset class in public markets around the world. We believe, high-quality renewable infrastructure companies have the potential to generate attractive returns over time through a combination of yield and growth.

Related: ESG: The Smarter Investment In Our Future