Twins. Many parents will tell you that they double the blessing. But economists would disagree, claiming that twins – i.e., twin deficits – could be negative for the economy. The recent deterioration in the U.S. current account and fiscal balance has sparked renewed debate over the twin deficit and its impact on the exchange rate – and the price of gold.

A twin deficit occurs when large fiscal deficits coexist with big trade deficits . The former happens when the government spends more money than it raises with taxes, while the latter is the result of imports exceeding exports. A historical example of the U.S. twin deficit occurred in the 1980s, when a significant expansion in the federal budget deficit accompanied a sharp deterioration in the nation’s current account balance. According to the Institute for International Economics’ report , “from 1980 to 1986, the federal budget deficit increased from 2.7 percent of GDP to 5 percent of GDP ($220 billion) and the current account deficit increased from 0 to 3.5 percent of GDP ($153 billion).”

Another example might be the 2000s. According to the New York Fed’s research paper , from 2001 to 2005, the U.S. current account and fiscal balances plunged by 3 and 4 percent of GDP , respectively. So, there is some correlation between these two. And some economists even believe that there is a causal relationship, i.e., that increases in budget deficits cause an increase in current account deficits. The link is believed to work as follows: higher deficits increase consumption, so imports expand and the trade deficit widens. However, both deficits actually have a common root: the increase in the money supply . When the Fed creates money ex nihilo to monetize the federal debt , it enables America to both borrow and consume more goods from abroad.

Regardless, in absolute terms, these old twin deficits were miniscule compared to the current one. As the chart below shows, the U.S. current account deficit (green line) has expanded significantly under Trump (despite all the trade wars !) and is approaching the historical record of $800 billion seen in 2006. 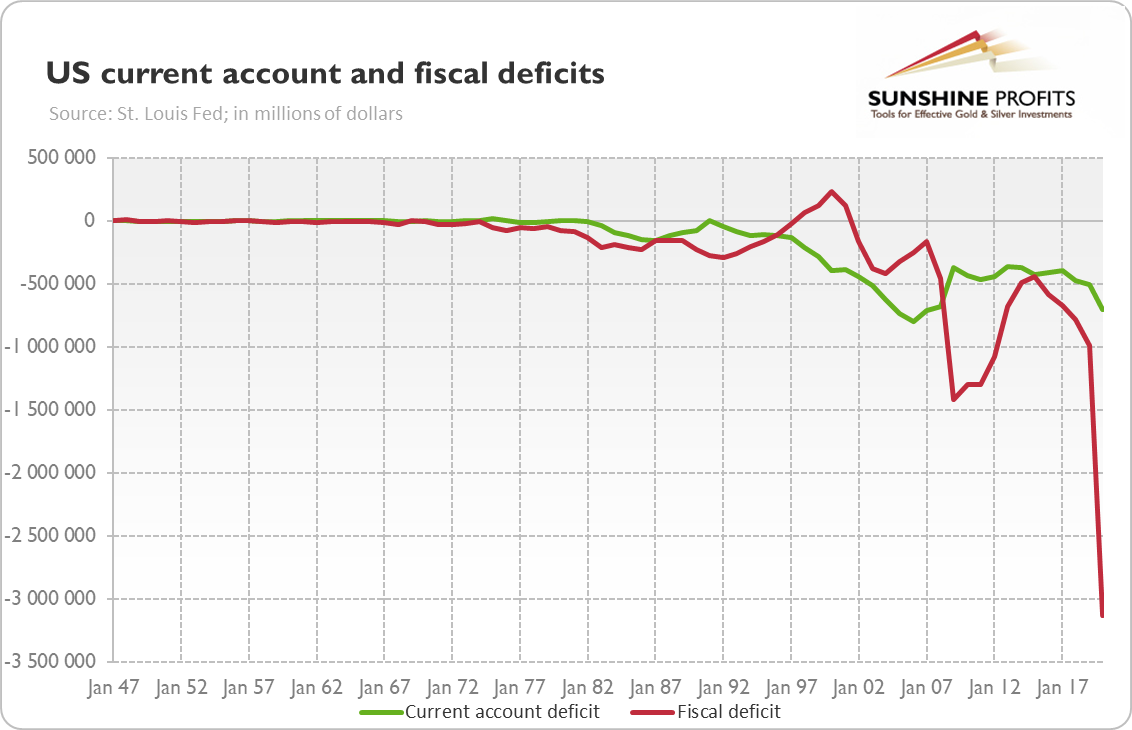 But what happened to the U.S. trade deficit is nothing compared to the fiscal deficit! As you can see in the chart above, it ballooned from $984 billion in fiscal year of 2019 to $3.1 trillion in 2020!

So, if we simply add these two deficits together, we will see that that the U.S. twin deficits have reached a record level . As the chart below shows, it has expended from $850 billion in 2014 to $3.8 trillion in 2020! 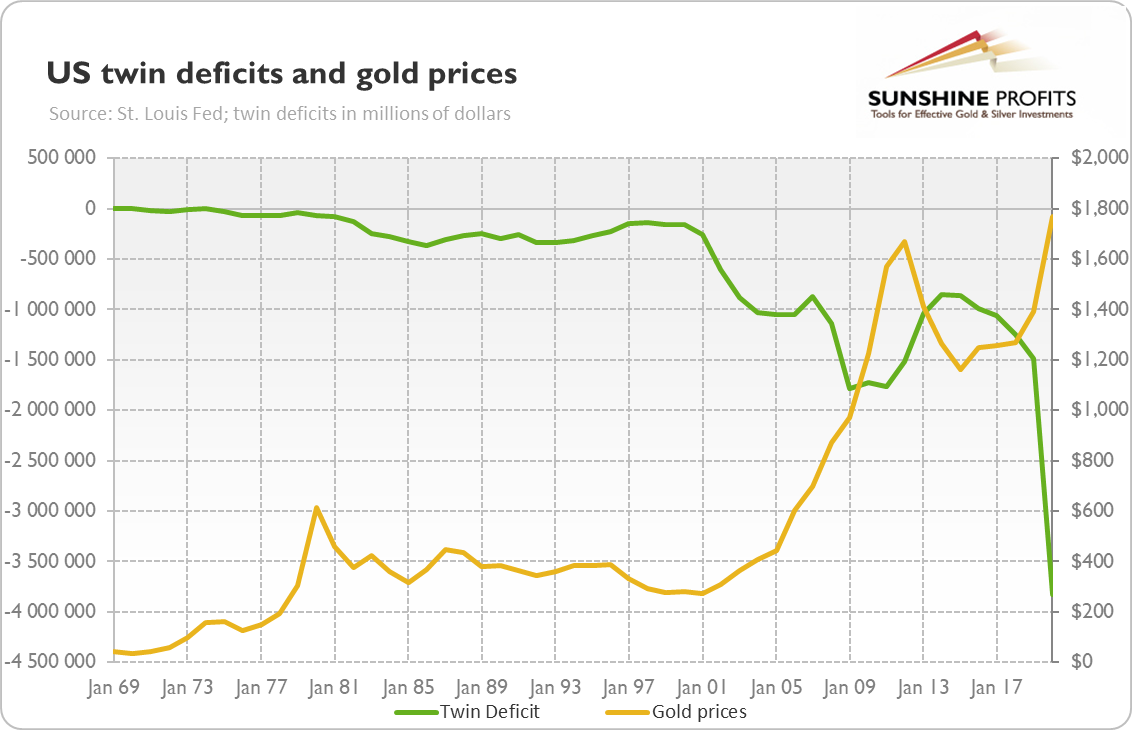 The key issue is what distinguishes the 1980s from the 2000s (and 2020)? I’ll tell you. In the former period, expansionary fiscal policy coincided with tight monetary policy . In consequence, the real interest rates increased, which encouraged capital inflows and strengthened the U.S. dollar. So, gold was melting.

Luckily for the yellow metal, this time, the easy fiscal policy is accompanied by the accommodative monetary policy . The Fed has already slashed the federal funds rate and it’s conducting quantitative easing to suppress the bond yields . Actually, some analysts believe that the U.S. central bank will implement the yield curve control to prevent any significant increases in the interest rates .

Hence, the combination of American monetary drunkenness and fiscal irresponsibility that largely contributed to the great expansion in the twin deficits should result in the weakening of the greenback . This, at least, is what we observed in the 2000s, as the chart below shows. 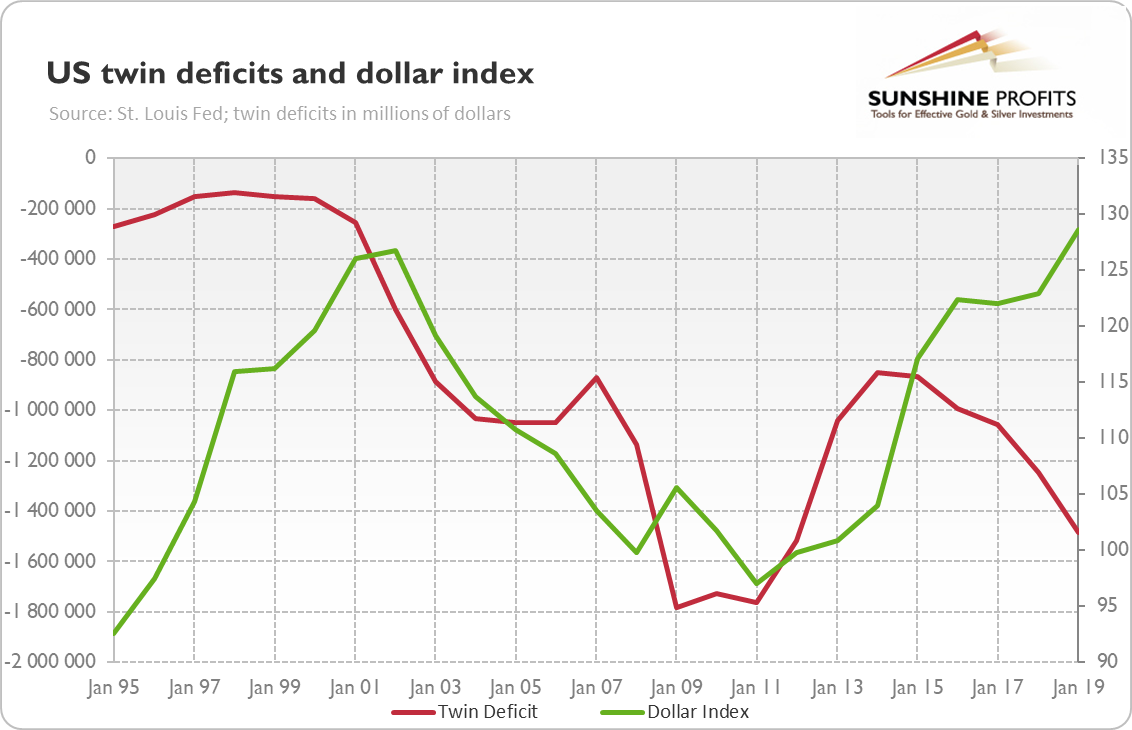 And this depreciation of the U.S. dollar should ultimately support gold prices , especially if we see reflation and the next commodity boom. It’s true that since its peak in August 2020, gold has been positively correlated with the greenback, but the inverse relationship can be restored one day. Investors shouldn’t forget that the dollar is not the only driver of gold prices – other factors also play a role. In the second half of the past year, both the real yields and the risk appetite increased, which outweighed the impact of the weakening dollar. Luckily, the Fed is ready to prevent any significant upward pressure on the Treasury yields coming from the twin deficits. That’s good for gold.