The bomb can explode one day. And I do not mean here missiles from North Korea, Iran or China. Neither I think about the viral threat – the coronavirus bomb has already blown up in spring, dragging the world into deep economic crisis. I have in mind the U.S. debt bomb. Just take a look at the chart below. As one can see, the public debt has reached 107 percent of the GDP even before the pandemic. 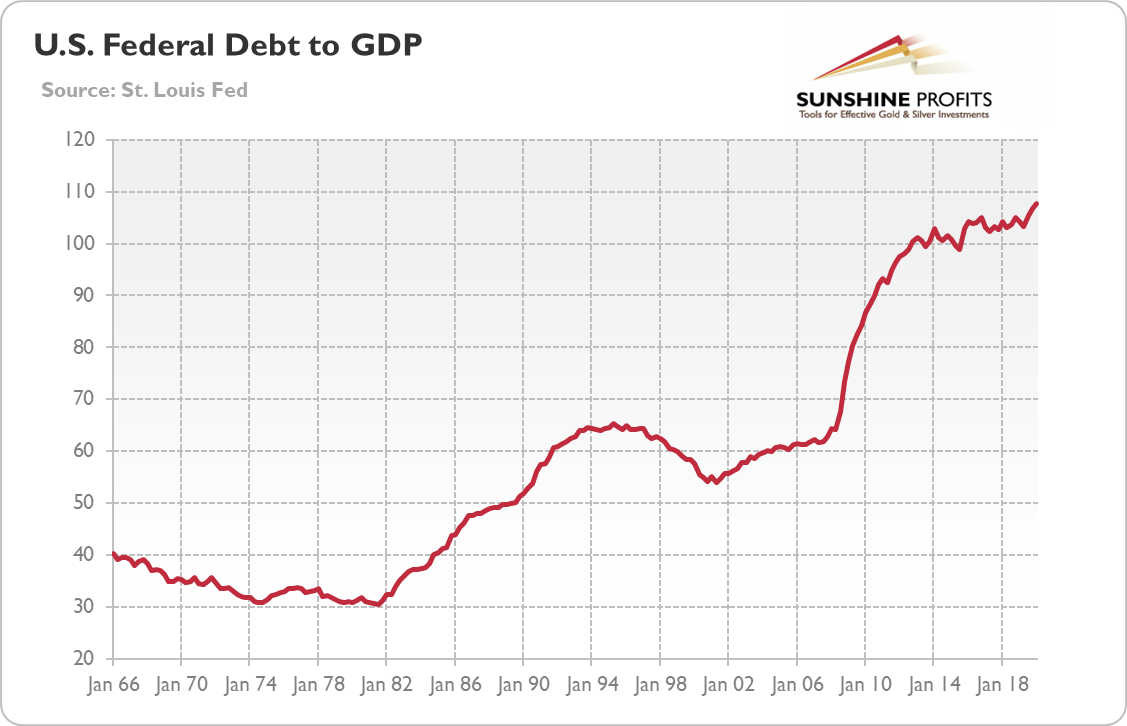 And it further increased in the second quarter of 2020, possibly even to around 137 percent, according to the U.S. National Debt Clock. Although the surge in the ratio of debt-to-GDP partially resulted from the unprecedented collapse in the economic activity triggered by the epidemic and the Great Lockdown, it was also driven by the vast additional government expenditures. As revenues declined, the fiscal deficit is expected to balloon from $984 billion, or 4.6 percent of GDP, in fiscal year of 2019, to $3.7 trillion, or 17.9 percent of GDP in 2020, according to the CBO. In consequence, the already high public debt is forecasted to increase even more. And Fitch has already downgraded its outlook on the U.S. debt from stable to negative.

Some economists claim that government stimulus financed by debt was necessary given the disastrous economic effects of the coronavirus crisis. Maybe it was, maybe not (we believe that increased spending on health should be accompanied by spending cuts in other areas) – but one thing is certain. When the battle with Covid-19 will be won (and it will be!), the policymakers will need to detonate the debt bomb.

There are a few ways to do it. The first is obvious and the less harmful one in the long-run. The government could reduce its excessive spending and, thus, fiscal deficits, stabilizing the ratio of debt to the GDP. Unfortunately, it is the most difficult option from the political point of view, especially when both Trump and Democrats talk about the need of more economic stimulus and higher spending on infrastructure.

Second, the government could hike taxes to raise more revenues, filling the budget hole. Trump is unlikely to raise taxes, but if Biden wins, higher taxes for the richest are possible. Although they would reduce the fiscal deficits, hiking taxes, especially in the aftermath of the recession, would be harmful for the economic growth.

All this means that policymakers will be tempted to reduce the public debt through either higher inflation or financial repression. Both ways are supportive for the gold prices.

Let’s start with inflation. Gold is believed to be an inflation hedge, so the increase in inflation – or mere inflation expectations – would increase the demand for gold and its price. Moreover, higher inflation means lower real interest rates – which would also make the yellow metal shine. So, attempts to inflate away the debt would weaken the greenback, lower the already ultra-low real bond yields, and support the gold prices.

Financial repression is maybe less spectacular but also positive for the yellow metal. It works as follows: the government caps the interest rates that financial institutions are allowed to pay. The idea is simple: thanks to the financial repression, government can borrow cheaper than it could otherwise because people simply are not allowed to get better returns elsewhere. This method wouldn’t be unprecedented, as it was used to reduce the high public debt after World War II.

Oh, by the way, the interest-rate ceilings were lower than the rate of inflation, so creditors received negative returns in real terms. It goes without saying that gold should shine during financial repression. After all, the argument that gold doesn’t pay interest would be less convincing in the world where other assets offer scant yields or even negative returns in real terms.

Yield curve control contemplated by the Fed would be that kind of financial repression, as it would also aim to keep the Treasury yields at sufficiently low level to reduce the debt-to-GDP ratio over time. If implemented – so far the U.S. central bank has not endorsed the idea – it would maintain ultra-low interest rates with all their negative consequences, such as: the prevalence of zombie companies and misallocation of capital, the search for yield and excessive risk-taking, the rise in private indebtedness, etc.

Moreover, the ultra-low interest rates could lead to capital outflows, which would weaken the U.S. dollar, while strengthening gold. Last but not least, the pledge to keep interest rates at very low level could require the Fed to let inflation turn hot, which would also support the gold prices.

To sum up, high public debt will be one of the most significant legacies of the coronavirus crisis. The efforts to reduce it will become an important element of the political debate in the upcoming years, as policymakers will realize – sooner or later – that they are sitting on a ticking time bomb. It seems that financial repression will be the preferred method of reducing the high debt-to-GDP ratio, dominating the investment outlook in coming years. Precious metals investors holding gold should benefit from negative real interest rates.

Related: Gold, Dollar and Rates Are a Correlated Story