Will Tesla Charge Gold With Energy?

Tesla has supported the price of Bitcoin, but it can affect gold as well.

The bull market in cryptocurrencies continues. As you can see in the chart below, the price of Bitcoin has recently increased to almost $47,000 (as of February 10). The parabolic rise seems to be disturbing, as such quick rallies often end abruptly. 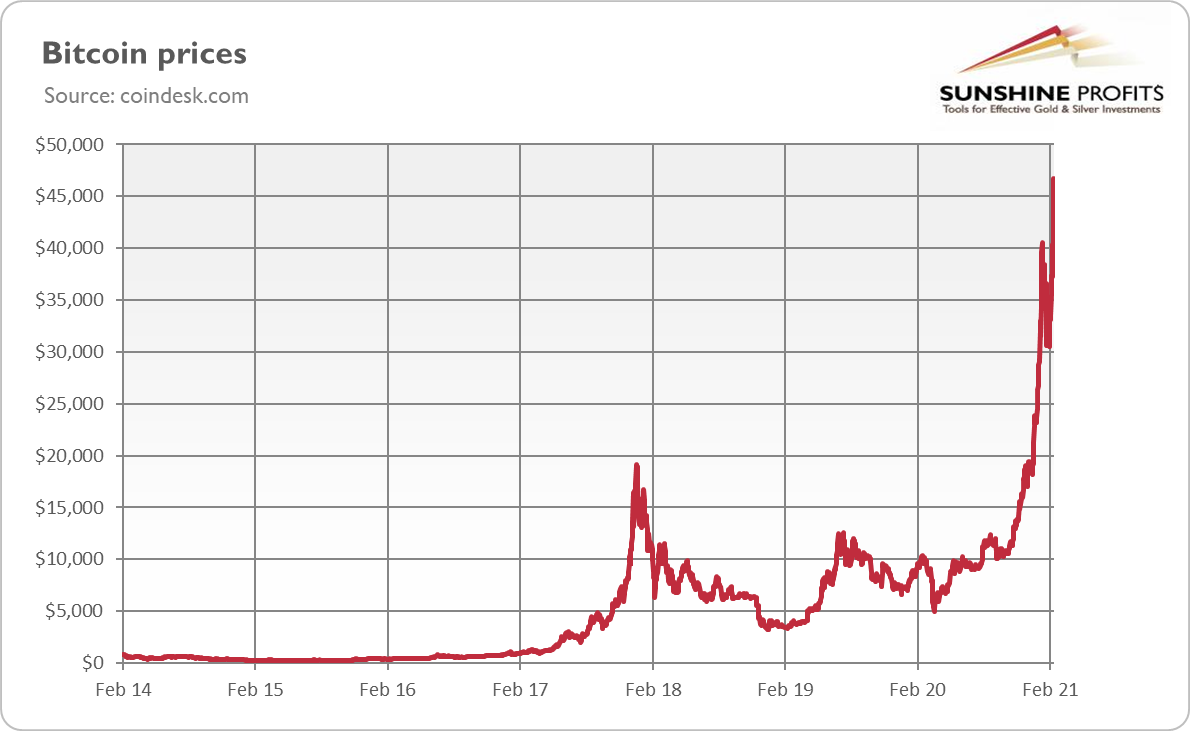 However, it’s worth noting that the price of Bitcoin has partially jumped because of the increased acceptance of cryptocurrencies as a legitimate form of currency by the established big companies. In particular, Elon Musk, the CEO of Tesla, has recently published a series of tweets that significantly affected the price of Bitcoin, Dogecoin, and other cryptocurrencies.

Furthermore, Tesla updated its investment policy to include alternative assets as possible investments. In the last 10-k filing to the Securities and Exchange Commission in January 2021, Tesla stated:

In January 2021, we updated our investment policy to provide us with more flexibility to further diversify and maximize returns on our cash that is not required to maintain adequate operating liquidity.

Importantly, these assets also include gold :

As part of the policy, which was duly approved by the Audit Committee of our Board of Directors, we may invest a portion of such cash in certain alternative reserve assets including digital assets, gold bullion, gold exchange-traded funds, and other assets as specified in the future.

This means that Tesla wants to diminish its position in the U.S. dollar and to diversify its cash holdings. In other words, the company lost some of its confidence in the greenback and started to look for alternatives. So, it seems that Musk and other investors are afraid of expansion in public debt , higher inflation , and the dollar’s debasement .

And rightly so! The continued fiscal stimulus will expand the fiscal deficit even further, ballooning the federal debt. With the budget resolution passed last week, only a simple majority will be needed in the Senate to get Biden’s $1.9 trillion package approved, a majority that Democrats have.

Remember also that the U.S. economy added only 49,000 jobs in January , while 227,000 jobs were lost in December (revised down by 87,000!). The poor non-farm payrolls will strengthen the odds of a larger fiscal stimulus and easier fiscal and monetary policies.

Hence, combined with the ultra-dovish monetary policy and a Fed more tolerant to inflation, the upcoming fiscal support could ultimately be a headwind for the dollar. Initially, the prospect of fiscal support caused positive reactions on the financial markets, but as the euphoria passes, investors start to examine the long-term consequences of easy money and the large expansion of government spending. Importantly, the larger the debt, the deeper the debt trap , and the longer the zero interest rates policy will stay with us, as the Fed won’t try to upset the Treasury.

What does Tesla’s move imply for the precious metals market? Well, we are not observing the kind of rally in gold that we are currently witnessing in the cryptocurrencies sphere (see the chart below). And – given the size of the gold market – it’s unlikely that Musk & Co. could ignite a mania similar to the one seen in Dogecoin. The gold market is simply too big. Even the silver market could be too large for similar speculative plays – as the failure of the recent attempt of a short squeeze has shown. 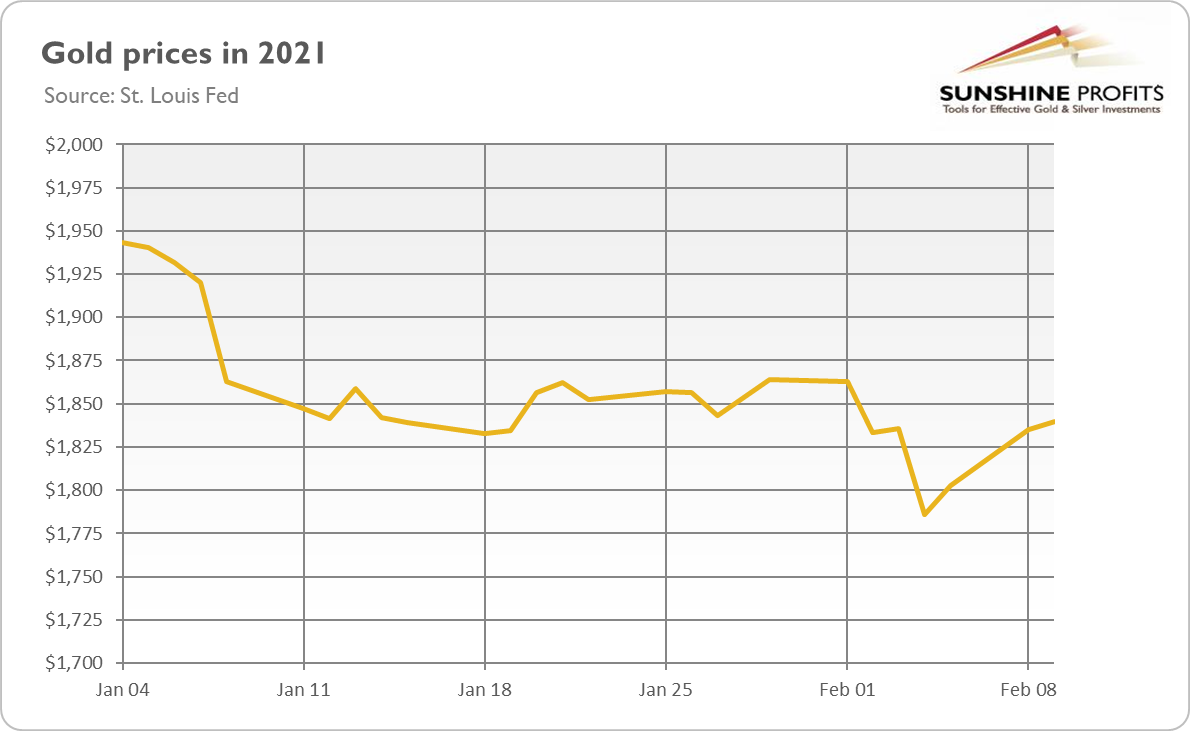 However, the update of Tesla’s investment policy is a confirmation of gold as a safe-haven asset and portfolio diversifier . If other big companies follow suit, and we see an actual reallocation of funds from the U.S. dollar towards gold, the price of the yellow metal will get an invigorating electric impulse.

Related: Believe It or Not, Bitcoin Hype Isn't Out of Control...Yet