Will Europe Be the Biggest Loser in the Russian-Ukrainian War?

Putin's speech fueled oil prices with the geopolitical risk of supply. What happened in the market concerned about the escalation of the war in Ukraine?

As we all know, “In war, truth is often the first casualty.”

This above quote has recently resumed to make a lot of sense since the beginning of the war in Ukraine. Indeed, there has been a lot of propaganda on both sides. From the Eastern side, to make people adhere to Russia’s “special military operation”, to the Western counterparts to push political leaders and public opinion to blindly support some ineffective policies aimed at imposing sanctions by throwing in the air an energetically charged boomerang. It will now hit European economies even harder than the Russian Federation, releasing more carbon dioxide into the atmosphere on its way and at much higher cost than it was supposed to do.

Could we get a clearer picture by stepping back from the officially presented narrative(s) and avoiding any story telling by simply looking closer at the data? Well, that is precisely what I am inviting you to try in order to let your emotions aside and make better trading decisions with a cold mind instead of blindly listening to the western media’s wishful thinking. As the famous international coach Tony Robbins said, "Confidence and competence is not the same thing. No one should go into their garden and chant, ‘There are no weeds. There are no weeds. There are no weeds.’ Positive thinking will get you nowhere.”

So how to foresee this conflict? As per Western media, “Russia is in a weaker position now and Ukraine is recapturing territories.”

However, on the other hand, Germany is nationalising gas giant Uniper to prevent bankruptcy; Europe is buying Russian energy from China, India, Saudi Arabia, and Turkey at a much higher price; and also shale gas from the United States (in US dollars versus a much more advantageous and stronger euro previously). Now that winter is coming, lights go off in Europe as prices soar. In the United Kingdom, the British government announced they are going to pay half of the companies' utility bills to help them survive the forthcoming energy crisis. France announced the construction of more nuclear plants, but such projects will probably take decades to materialize.

No wonder, in the absence of consistent leaders, the EU is forced to disregard previous climate agreements in order to purchase other energy sources, such as coal, from Australia, Indonesia, and South Africa (rather than neighboring countries). Not to mention those passing through ships on the high seas while consuming more maritime fuel (including gasoil).As a result, they will end up burning coal as an alternative fuel to (cleaner) natural gas. To sum up, I am really not sure who is winning, but we can already spot that one big loser will be the European Union for sure: its currency, its economy, its fragmentation, etc.

As clinical psychologist Dr. Jordan Peterson stated in his last interview, notions that the Russians are going to lose the war in Ukraine are “naïve.” (Video)

On the above map, those are the regions in which some referendums will be held this weekend in an attempt to ratify those territories’ being linked to the Russian Federation. Given that a number of people in those separatist-controlled areas (in particular, in both the Lugansk and Donetsk regions, being part of the Donbas) are Russian-speakers and probably a majority are pro-Russia, we could expect them to vote in favour of joining the Federation of Russia. This is probably why President Putin announced a "partial mobilization," so that it would turn the Russian army into a defensive one if Ukraine, with the help of Western countries, were going to sabotage this.

Another hypothesis would be that the Russian leader announced those referendums to trigger an offensive from Kiev as Russian troops were recently redeployed all around those territories. If the situation were to take a new turn, Turkish President Erdogan would undoubtedly play an important role in ensuring mediation between all the different parties. According to the Turkish leader recently interviewed by PBS NewsHour, “Russian leader Vladimir Putin is ready to end the war in Ukraine and [will] take a significant step in that direction shortly.” (Source)

On the macroeconomic view, the greenback has bounced above its previous swing high by breaking above the R2 quarterly pivot (around $110.50) to trade in the early U.S. trading session near $111.20. As mentioned in my previous article, it looks like the quarterly R3 pivot ($115) could now be the next target.

Regarding U.S. economic data and monetary policy to curb inflation, the Federal Reserve announced on Wednesday it would raise its key rate again sharply by 0.75 basis points (making the Dow fall by 500 points), just before the Bank of England announced the following morning a 0.50-bps rise. 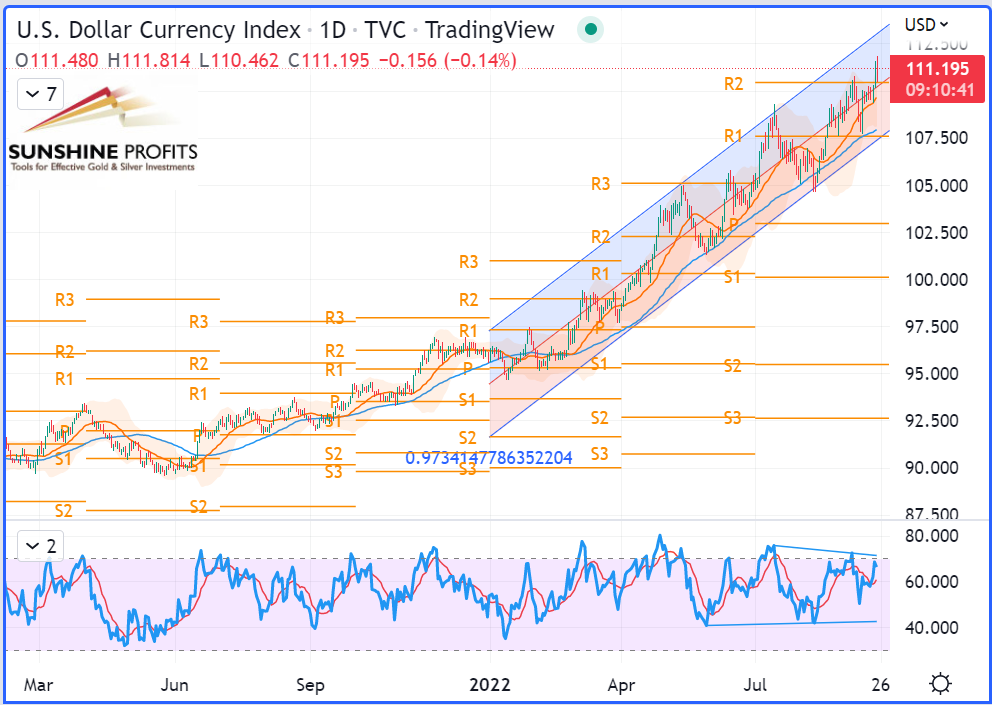 Crude oil prices were in the green on Thursday, boosted by the geopolitical risk on supply, which returned to the fore after statements by Vladimir Putin, the market fearing an escalation of the war in Ukraine.

On Wednesday, the Energy Information Administration (EIA) released the weekly change in the count of barrels of commercial crude oil held by US firms. During the week ended September 16, oil stocks were building an excess of 1.142M barrels, while analysts were anticipating almost double that.

This less-than-expected increase is reinforced by the fact that US strategic reserves fell by another 6.9 million barrels over the same week. In addition, the rise in inventories can be largely explained by that of imports, which rose by 20% over one week, while exports remained stable. At the end of the day, the market reacted more to the downturn in gasoline reserves, for which demand weakened further in the United States.

On the daily chart, WTI crude oil (November contract) has been overlapping its mean regression line (or median of its regression channel) currently starting from May-26 on the daily chart to get a Pearson’s R (coefficient) above 0.86, that is to say, with a 4-month long correlation over 86% for WTI, 91.5% for RBOB Gasoline, and 91% for Brent (see below charts). 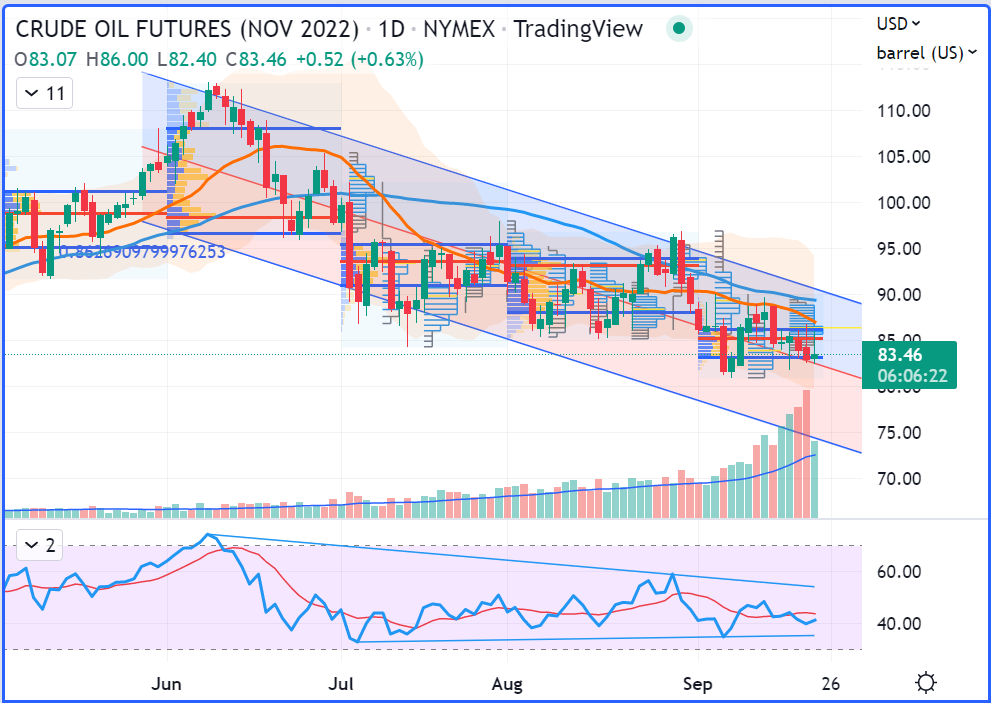 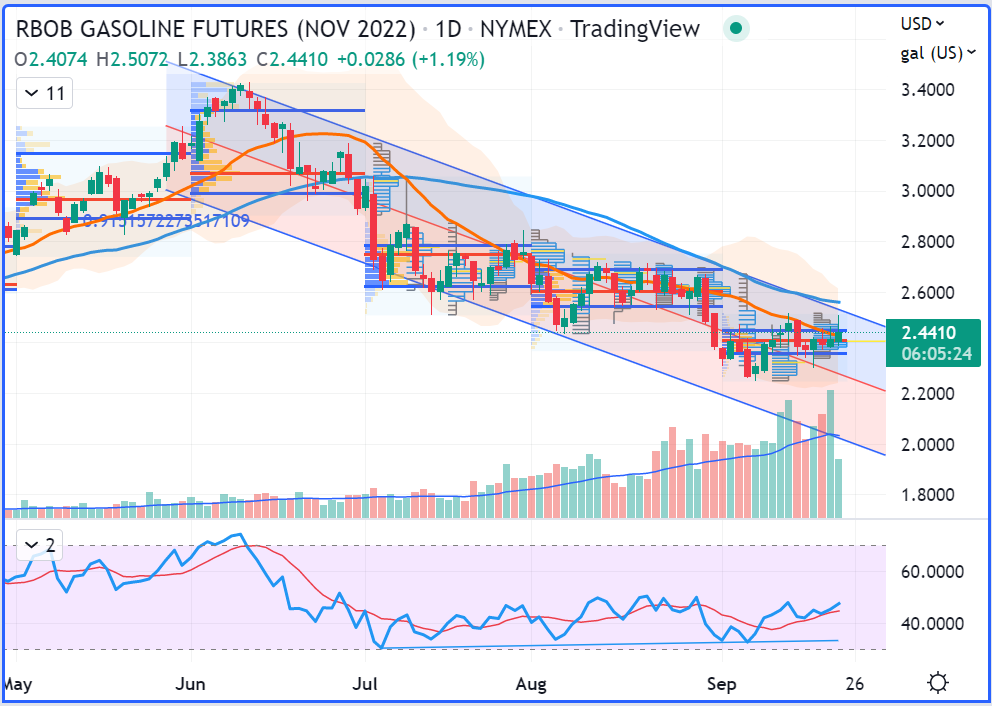 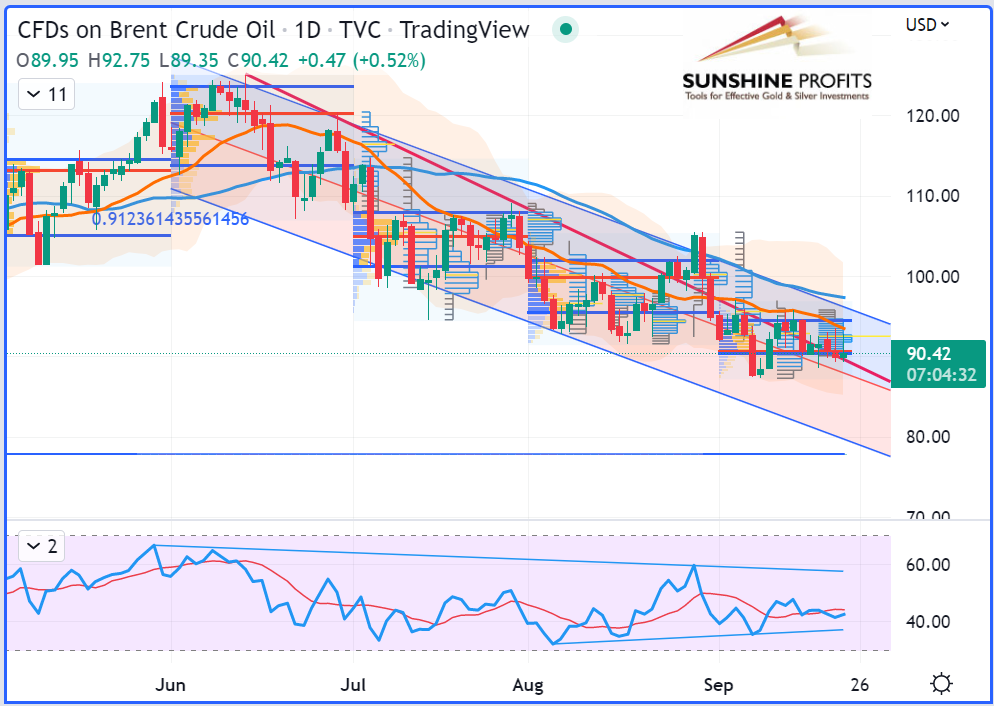