Will Copper Be the Top Performing Commodity in 2021?

What a way to kick off the new year.

If you happened to watch the storming of the Capitol unfold live on TV on Wednesday of last week, you might have mistaken it for a movie adaptation of a Tom Clancy novel.

Despite the turmoil, stocks have incredibly continued to trade up. On Friday, the S&P 500 opened at a new record high as disappointing jobs numbers sparked hopes of additional fiscal stimulus.

Such spending seems even more likely now that the Democrats have managed to gain control of both chambers of Congress, following Georgia’s special Senate election.

I’m not sure if a 50-50 split constitutes the “blue wave” we kept hearing about in the months leading up to the November election, but it provides the Democrats with just enough political capital to realize at least some of the policies on their wish list, including green renewable energy. President-elect Joe Biden has an ambitious deadline of 2035 for decarbonizing the U.S. power grid.

If nothing else, this should be positive for gold, given the potential for greater government spending and, therefore, inflation.

Remember: Government policy is a precursor to change. We liked renewable energy stocks well before the election, and I believe investors would be missing an opportunity if they overlooked them now that the sector may get support from the new Congress and administration in the coming months.

That brings me to the main topic: commodities. As I told you last week, we’ve updated our perennial popular Periodic Table of Commodities. You can visit the interactive table and download your own pdf by clicking here.

Precious metals did well overall. Silver stood as the top performing commodity, up nearly 48%, its best year since 2010, when it rose over 80%. The white metal benefited not only from haven demand, fueled by unprecedented money-printing, but industrial demand as well. Among other applications, silver is a crucial component of photovoltaic (PV) cells, which are found in solar panels. 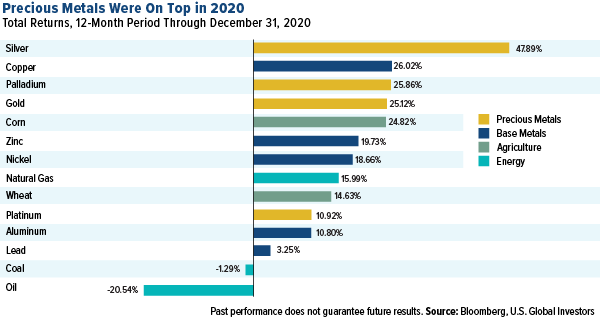 Copper prices were up in 2020 for very much the same reason. The world’s transition to renewable energy and electric vehicles is driving global demand for the highly conductible metal.

Up 26% for the year, copper is poised to be a top performer in 2021 as well. China has historically been the world’s largest importer of the metal, but now that its economy has largely recovered from the pandemic, the country has been buying it at a record clip. But China isn't alone. According to research firm Wood Mackenzie, 2021 is expected to be a record-breaker for renewable auctions in Europe.

Copper and other industrial metals should also get support from the strengthening manufacturing sector in the U.S. The ISM Manufacturing PMI registered 60.7 last month, marking its highest level since September 2018. December was also the eighth straight month that the gauge of manufacturing activity held above 50.0. All six of the biggest manufacturing industries expanded, including fabricated metal products. 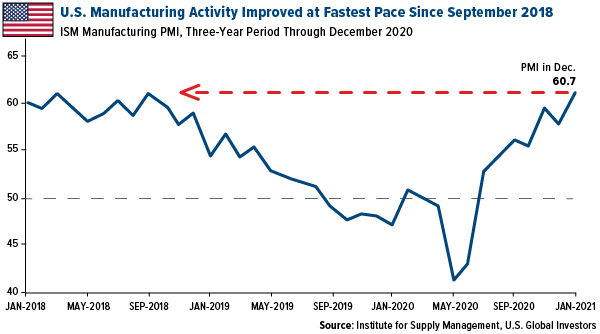 Our favorite copper stock remains Ivanhoe Mines, which is my top pick for 2021. The company is in the process of building three mine development projects in Southern Africa. Among them is the world-class Kamoa-Kakula high-grade copper project, which is only six months away from scheduled initial production, according to a company presentation from last month.

Energy was the worst performing S&P 500 sector of the year by far. The S&P 500 Energy Index ended the year down more than 37%, followed by the Real Estate Index, down 5%.

The S&P Goldman Sachs Commodity Index (GSCI) couldn’t quite recover its 2020 pandemic losses by the end of the year, falling some 6%. If you take energy out, though, the index of commodities ended up more than 16%. 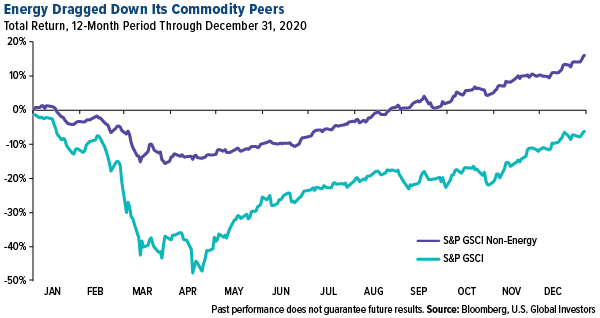 It’s still early, I think, but we could see a strong buying opportunity in oil and gas stocks. This would require the vaccine to become available to a greater share of the population, allowing for businesses to remain open and travel to return to normal. To speed up the process, Biden said on Friday that he would release nearly all of the stockpiled vaccine doses upon taking office instead of rolling them out in stages.

Last week the U.K. locked down its economy for the third time since the pandemic began, due to the emergence of a new, more contagious variant of the virus. The mutated strain has been found in the U.S., including in California, Colorado, Florida, New York and Texas.

In other news, Bitcoin continues to hit new record highs. Last week it smashed through $40,000, doubling its value in as little as 23 trading days. That was enough to push the combined market cap of the cryptocurrency universe above $1 trillion for the first time, according to CoinMarketCap data.

As I said recently, this rally is different from the one in late 2017. This time it’s being driven by high-net worth individuals and institutional investors—hedge funds, pension funds, endowments and more. The same drivers of higher gold prices—money-printing, expectations of stronger inflation—also appear to be supporting Bitcoin.

Early last week, JPMorgan said that Bitcoin could climb to $146,000 over the long term if investors started trading it like digital gold.