Trump Recovered. What About Gold?

Donald Trump caught a coronavirus, but miraculously, he has already left the hospital in good shape. Unfortunately, gold didn’t show too much empathy about it.

Oh boy, what a week has been so far! On Friday, when it turned out that the United States President was tested positive for the Covid-19 and taken to the hospital, the whole world held its breath. Luckily, he was hospitalized for only three nights, and on Monday, he returned to the White House, after receiving state-of-the-art medical treatment for the coronavirus .

Surprisingly for some observers, as one can see in the chart below, gold moved truly little following the news about Trump’s infection. Indeed, the yellow metal has managed to jump above $1,900 again, and it had retreated after a few days above that line – just when Trump got out of the hospital. 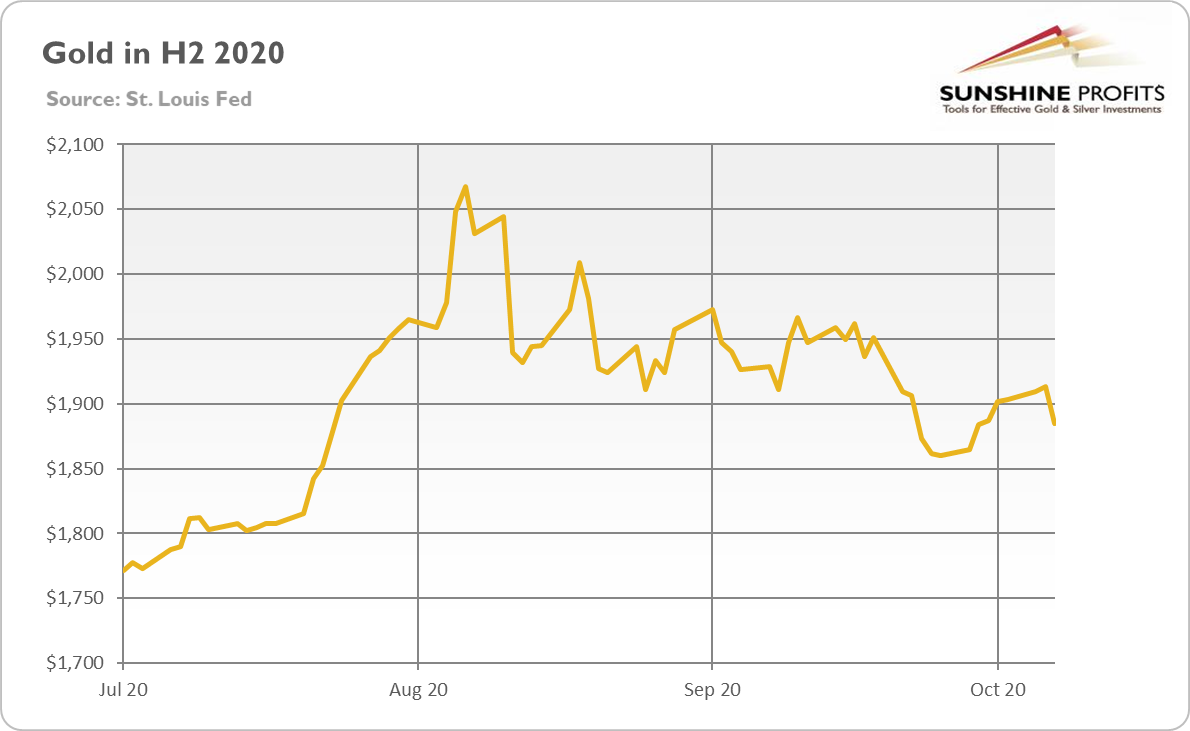 Isn’t this muted reaction a bit strange? Just think about it, Donald Trump, which is the most powerful man in the world, could’ve died from Covid-19, which could put the US into political chaos, while the price of gold just increased for merely several dollars?

But, you see, gold’s reaction to the geopolitical events is often limited, as we’ve repeated many times in the past. And the news about Trump’s health were rather optimistic, which has not sparked a panic rush into safe-haven assets such as gold .

Moreover, Trump continued with his erratic behavior and halted all the stimulus talks until after the election. On Tuesday, he wrote:

“I have instructed my representatives to stop negotiating until after the election when, immediately after I win, we will pass a major Stimulus Bill that focuses on hardworking Americans and Small Business.”

However, one day later, Trump softened his stance, saying that he was ready to sign a bill providing a fresh round of $1,200 stimulus checks. The political gridlock and the lack of a deal on fiscal aid have put downward pressure on both the stock market and gold .

Another issue related to Donald Trump is that his aggressive performance in the first presidential debate did not help him boost his presidential race changes. As the chart below shows, Biden's advantage over Trump in national polls has increased to 10.1 percentage points. 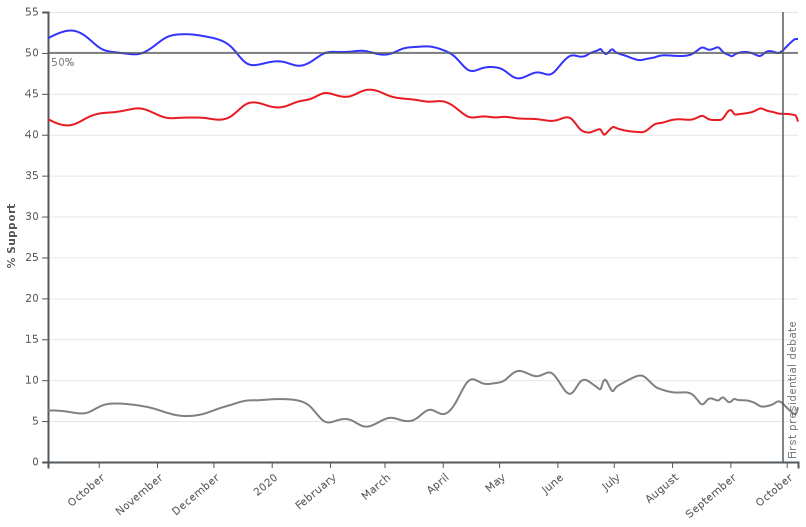 The potential Biden’s victory and taking full control of Congress by Democrats is an important upward risk for gold , especially if the election results are contested.

What does all of the above mean for the gold market? Well, the fact that even the POTUS caught the coronavirus (and that the White House is in disarray with more than 20 people in the Trump’s administration infected recently) could renew the fears of the Covid-19. The President’s infection emphasizes the realities of risk right in front of all Americans and people worldwide.

Indeed, the pandemic is far from being over , as the chart below shows. The number of daily new confirmed Covid-19 cases in the US is rising again. The worries about the second wave could support the safe-haven demand for gold, but it could also ignite a selloff and rush towards cash if pushed to the extreme. 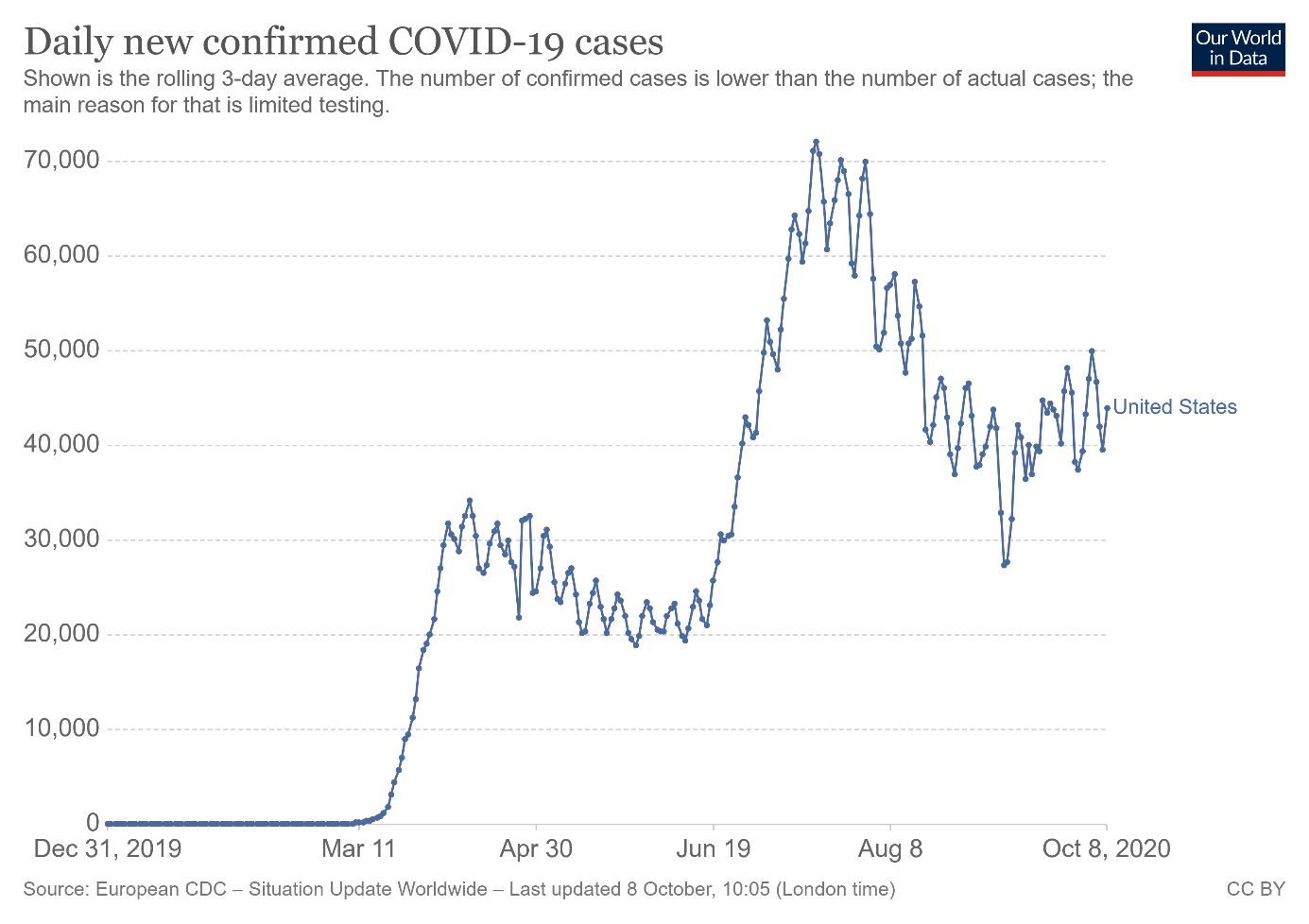 On the other hand, Trump’s recovery and downplaying of the coronavirus threat in public could also make people less fearful of the pandemic. He has tweeted recently: “Don’t be afraid of Covid. Don’t let it dominate your life.” And the fact that the President got the best and newest drugs to fight the infection could also revive the optimism in the medical COVID-19 treatment, which could be rather negative for the gold prices.

The political gridlock over the fresh stimulus package seems bad for gold, but it is more bearish for the stock market, as equities require fiscal (and monetary) support to a far greater than the yellow metal .

The effect of the presidential race on gold depends on whether the Democrats take full control over Congress. But given that fundamental drivers remain favorable for gold in the medium-term, I would bet neither on blue nor on red, but on gold.

Related: Q2 Was Disastrous. What’s Next for the US Economy and Gold?