S&P 500 and Gold Bulls, Get Ready to Meet the Bears

Yesterday's recovery ended on a weak note as stock bulls gave up the opening gap. Disappointing in the very short run, especially given that other key markets acted likewise weak. Neither corporate bonds, nor gold, nor oil could get their act together, and are hanging in the balance. Inviting the bears to probe the defences, how far south will they be able to get?

We have the Fed meeting later today, and while I am not looking for hawkish surprises or any outright optimism, the investors aren‘t taking chances. Sell now, ask questions later seem to be the mantra before the U.S. open.

While Monday‘s hanging man candlestick predictably didn‘t bring follow through selling on Tuesday, I am looking for the bulls to get tested today. Once the dust clears, we can go on making new highs, but the short-term storm (storm in a teacup, more precisely) hasn‘t started yet.

In today‘s article, I‘ll examine the S&P 500 standing, look into precious metals, and finally answer a pointed question about gold. 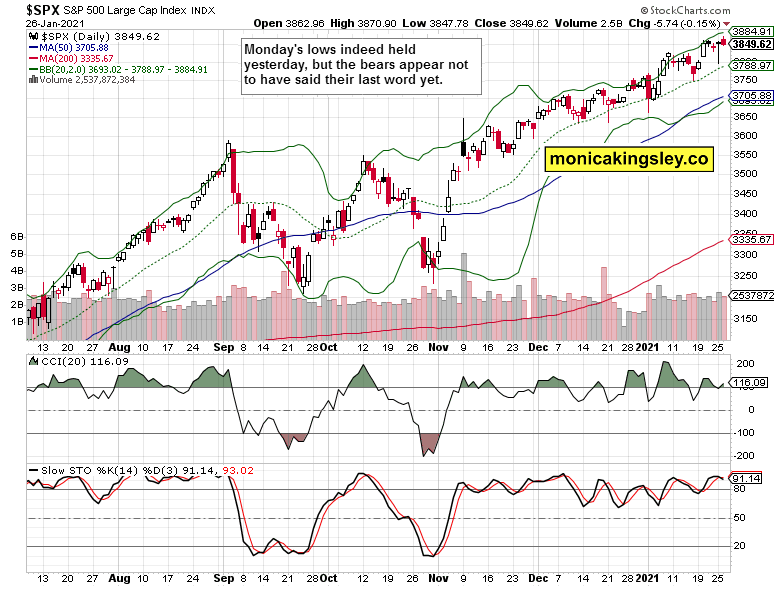 Stocks are hanging in the short-term balance following yesterday‘s weak close. Unconvincing volume, inviting a premarket push to the low 3800s as we speak. The aftermath of the Fed will set the tone for the coming sessions, but I would look for early credit market clues before buying any dip. 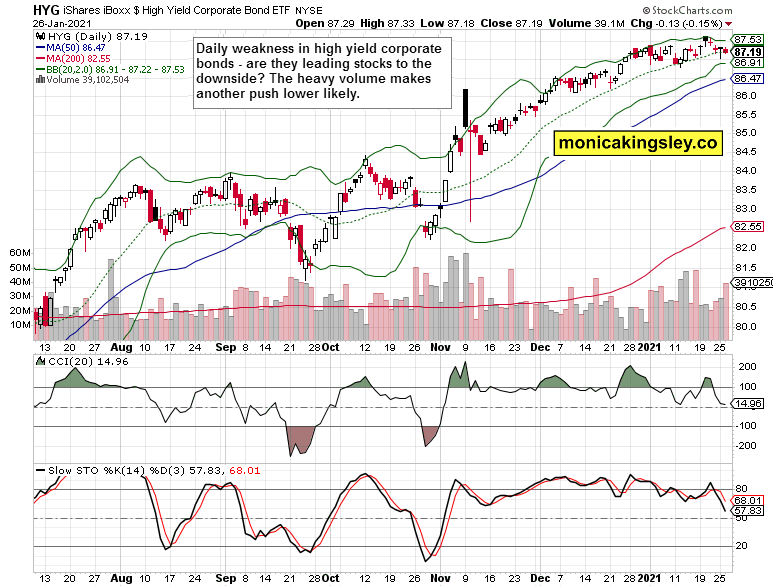 High yield corporate bonds (HYG ETF) had a weak day yesterday, missing the opportunity to rise. Quite to the contrary, they traded relatively weaker than the S&P 500 did. Any time corporate bonds start underperforming stocks, I am watching closely, and often from the sidelines.

Investment grade corporate bonds (LQD ETF) closed about unchanged while Treasuries paused and didn‘t really advance compared to Monday. They appear waiting for the Fed, unwilling to move before discounting possible hawkish surprise (positive assessment of the economy would do that trick) as a false alarm. 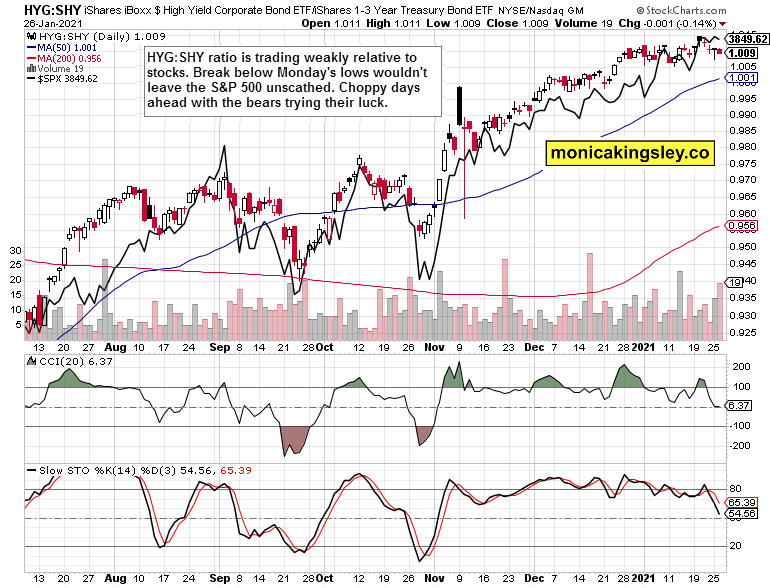 The ratio of high yield corporate bonds against short-term Treasuries (HYG:SHY) with the S&P 500 overlaid (black line) shows the very short-term vulnerability in stocks. How low will these go as the greed sentiment gets taken down a notch?

You see, yesterday I did strike an optimistic tone in the runup to the regular session‘s open, but the bulls missed a good opportunity to act, and the resultant signals favor the bears to step in now. That‘s the essence of my trading style – neither a permabull, nor a permabear, and always ready to turn on a dime should the facts change. 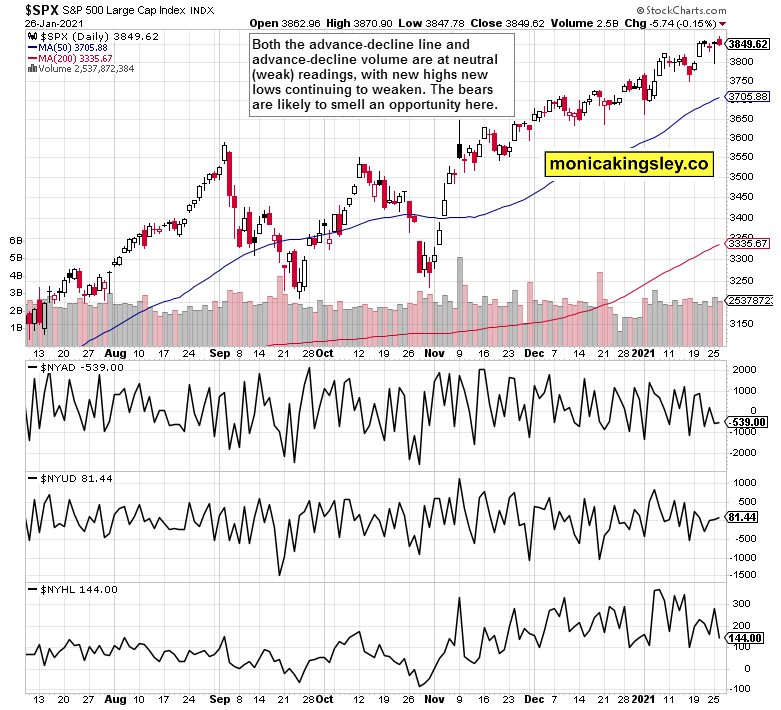 The market breadth indicators show we‘re on the doorstep of a push lower. Instead of holding ground, new high new lows solidly declined, while both the advance decline line and advance decline volume muddled through. That‘s not exactly a bullish constellation. 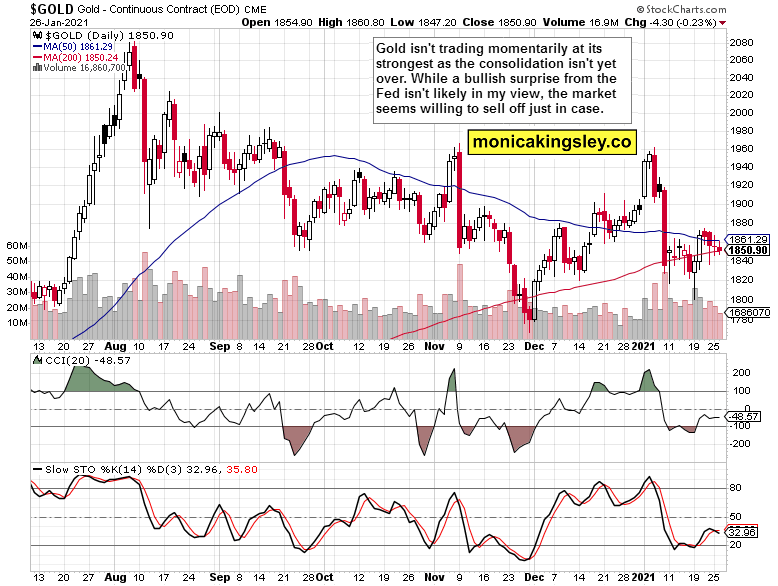 Gold also appears to be acting a bit weak in the short run. No surprise as I don‘t see the lengthy consolidation as quite over yet. This one will more likely wear you out than scare you out. Simply put, the gold bulls better wait for spring to usher in another precious metals upleg as the miners to gold ($HUI:$GOLD) ratio isn‘t sending any kind of confirmation that the sector has made a turn. 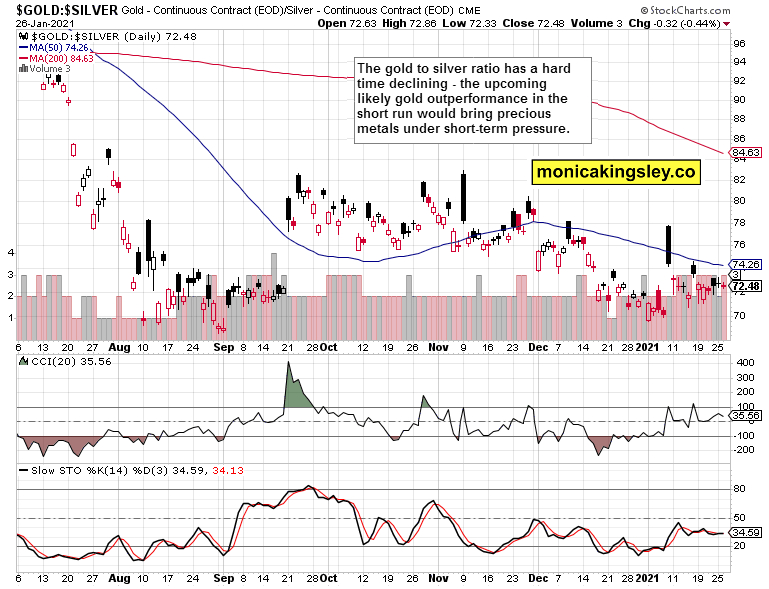 The gold to silver ratio keeps treading water, and isn‘t declining below its early September lows. On the other hand, it‘s not trading too far from them either, which translates into silver not acting at its weakest exactly. That‘s a bullish sign, showing that this 5-month long consolidation is really getting long in the tooth. 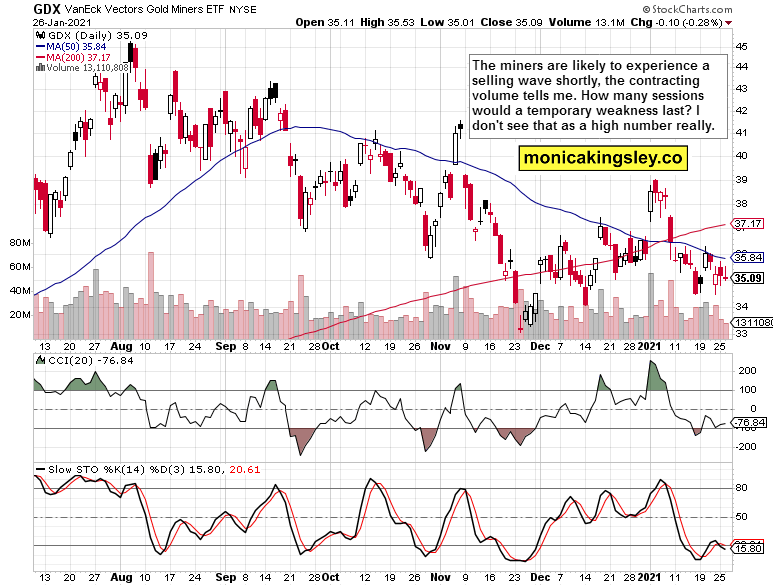 Completing the picture, miners (GDX ETF) reveal lackluster short-term performance. Long upper knot and volume as low as could have been, mean that we better brace ourselves for a down session today.

From the Readers‘ Mailbag

Q: Hi Monica, congratulations and best wishes on your new venture and I look forward to following your work.

I'm an English working class boy, now very Grey who follows the gold market like a hawk. I'm a longterm investor in PM's sector and I have a largish position in PM miners (still in profit on most) but the last six month are playing havoc with my nerves. The best metaphor I have that describes my current situation is that I have a large bowl of golden soup with a big fly swimming in it and its name is Mr Radomski. His latest missive of 25 Jan outlines "where to now Gold" with a possible/probable decline of gold to between $1500 - $1600. I was rather hoping you might comment on his analysis and on how you see things developing over the coming months. I appreciate that you don't give financial advice but his very bearish view is discomforting given the mad world we have around us and if Gold could crash to these levels in the current situation it begs the question why bother investing in PM's.

A: Thank you for the question and for authorizing me to print it just the way it arrived. I‘ll answer solely from my personal perspective, and won‘t comment on personalities. I understand your frustration with gold being unable to really move, but as I tweeted already yesterday, this months-long correction is one to wear you out, not to scare you out.

Please check my Aug 07 article written for Sunshine Profits called S&P 500 Bulls Meet Non-Farm Payrolls, where in the section Calling out gold, I discuss the yellow metal‘s prospects. Compare that with my Monday‘s article Rosy February for S&P 500? Not So Fast to see how things turned out in the sector precisely.

It‘s with the same conviction that I say today again that this long consolidation in gold is in its latter stages. For now, gold is still rangebound, and I don‘t see a deflationary crash repeating that would bring it to said $1,500 - $1,600 levels. Definitely not. Looking at the real world around us, the Fed is becoming more active in expanding its balance sheet, new stimulus checks are coming (money flowing directly into the real economy, not sitting on commercial banks‘ balance sheets), and fiscal policy isn‘t tame exactly either. Inflation is making a steady return, and it‘s a question of time (think months) before it becomes broadly acknowledged.

In such an environment, a gold drop would be bought with both hands, thank you very much. Copper is rising, base metals aren‘t doing badly, and food price inflation is hot. We‘ve entered a decade of commodities, which would outperform paper assets. Who could tell me why gold would crash, even temporarily? What kind of mayhem in the bond markets would have to trigger that? Make no mistake, no single market moves in a vacuum.

Quite to the contrary, I look at gold and Bitcoin as the safe haven plays, with Bitcoin being the wild and volatile one. I am saying that Bitcoin has clearly decoupled, and once gold does the same, it means a vote of no confidence in the financial system. But this is not where we are currently. Gold is taking its cues from interest rates, real ones to be precise. The king of metals is also doing well during times of rising inflation.

Take the Fed keeping rates as low as can be for as long as eye can see (practical view of things), rising inflation bringing down opportunity costs of holding precious metals, and you have a great driver of higher gold prices. Given the economic policy steps, how likely is a deflationary shock now? Instead, look for the newly created money to keep entering the real economy, battling the high savings rate. Once you see the velocity of money to pick up, that would be the cherry on the cake. Gold unbound next.

For now though, arm yourself with patience, and don‘t let any gloomy forecasts not matching your real world experience of what‘s truly going on in this Brave New World, drive you to abandon your prior decision. Have the facts, the rationale changed? Constantly evaluate these, honestly and truthfully without getting scared. No, the answer is that the drivers are still in place, and will be gaining an upper hand increasingly more over time.

I see gold as breaking higher from this lengthy consolidation in spring, and as I‘ve explained in Monday‘s article, miners are set to outperform the metal early in this move when it comes, because they‘ve been beaten down quite sufficiently already.

Look also at the gold to silver ratio. Spikes in favor of gold are what I would look for in the next monetary crisis, or liquidity crunch. Currently, none is on the horizon.

Time has come for another daily downswing in stocks, and it remains to be seen whether it entices the buyers to act. Technology, communications and consumer staples were among the best performing sectors yesterday, which doesn‘t paint a picture of broad short-term strength. Repeating the final sentence of yesterday‘s summary, the nearest days may (see today‘s session for proof) bring another push lower that won‘t however jeopardize the bull market in the least.

Related: The Sky Has Just Cleared for Stocks in the Short Run