Powell Sounds Dovish, but Is He Dovish Enough for Gold?

Although dovish, Powell downplayed the bond yield rally. The Fed’s more tolerant stance on inflation is good for gold, but the metal may continue its bearish trend in the short-term.

In the last edition of the Fundamental Gold Report, I analyzed the latest FOMC statement on monetary policy and economic projections . Today, I would like to focus more on Powell’s press conference . My reading is that the Fed Chair sounded like a dove. First of all, he emphasized several times that the jump in inflation this year will be only transient , resulting from the base effects and rebound in spending as the economy continues to reopen. And Powell explicitly stated that the US central bank will not react to this rise in consumer prices (emphasis added):

Over the next few months, 12-month measures of inflation will move up as the very low readings from March and April of last year fall out of the calculation. Beyond these base effects, we could also see upward pressure on prices if spending rebounds quickly as the economy continues to reopen, particularly if supply bottlenecks limit how quickly production can respond in the near term. However, these one-time increases in prices are likely to have only transient effects on inflation (…) I would note that a transitory rise in inflation above 2 percent, as seems likely to occur this year, would not meet this standard [i.e., the Fed’s goals of maximum employment and stable prices].

Second, Powell also pointed out that we are still far, far away from reaching the Fed’s employment and inflation goals. So, investors shouldn’t expect any hikes in the interest rates or any taper tantrum anytime soon. He was very clear on that, saying that it’s not yet time to start talking about tapering, and that the Fed will announce well in advance any decision to taper its quantitative easing program. Indeed, in a response to the question “is it time to start talking about talking about tapering yet”, he said:

Not yet. So, as you pointed out, we’ve said that we would continue asset purchases at this pace, until we see substantial further progress. And that's actual progress, not forecast progress. (…) We also understand that we will want to provide as much advance notice of any potential taper as possible. So, when we see that we’re on track, when we see actual data coming in that suggests that we're on track to perhaps achieve substantial further progress, then we'll say so. And we'll say so well in advance of any decision to actually taper.

Third, the Fed Chair reiterated a few times that the Fed’s changed its approach and it will not react to the forecast progress, but only to the actual progress , stating that:

the fundamental change in in our framework is that we’re not going to act preemptively based on forecasts for the most part. And we’re going to wait to see actual data (…) And we’re committed to maintaining that patiently accommodative stance until the job is well and truly done.

It makes some sense, of course, but it also increases the risk that the Fed’s response to rising inflation will be delayed. The same stance was adopted in the 1970s, when the central bankers believed that they would have plenty of time to react to any dangerous increases in consumer prices. But such an approach resulted in inflation getting out of control, leading to great stagflation . Gold shined then.

What does this all mean for the gold prices? Well, latest Powell’s remarks were dovish, which should support the yellow metal. But, as the chart below shows, we don’t see such a support reflected in the gold prices (London P.M. Fix). 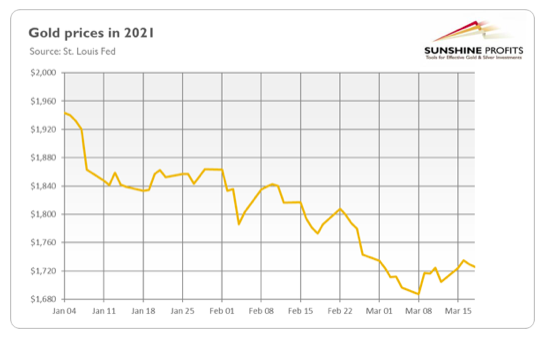 Part of the problem is that the bond yields continued to rise, after a short pullback amid the FOMC statement, exerting further downward pressure on the gold prices. A related issue here is that although Powell sounded generally dovish , he expressed a relaxed view on the current rally in the interest rates. Indeed, when replying to a question on the bond selloff, Powell just said that “we think the stance of our monetary policy remains appropriate”. So, his comments imply that the bond yields have room to move further up in the near-term, thus hurting the price of gold .

However, there is certainly a level of interest rates that would be uncomfortable for the Fed (and Treasury), forcing it to intervene more decisively in the financial markets, and we’re not necessarily far from this level. Furthermore, given the rising inflation and inflation expectations, the real interest rates should rise at a slower pace than the nominal yields, and if they do actually fall, they would support the price of gold.

If you enjoyed today’s free gold report , we invite you to check out our premium services. We provide much more detailed fundamental analyses of the gold market in our monthly Gold Market Overview reports and we provide daily Gold & Silver Trading Alerts with clear buy and sell signals. In order to enjoy our gold analyses in their full scope, we invite you to subscribe today . If you’re not ready to subscribe yet though and are not on our gold mailing list yet, we urge you to sign up. It’s free and if you don’t like it, you can easily unsubscribe. Sign up today!