On the Verge of USDX and PM Sector Pause

In Monday’s analysis , we’ve explained why rising stock prices might not lead to significantly higher gold prices after all before the latter turned south again. The manner in which this week’s trading was conducted seems to have confirmed our indications. With stocks ( S&P 500 ) up by 1%, and Monday’s close as its second-highest daily close this index has made – ever, did gold rallied that strongly as well? Not by any means. As a matter of fact, gold futures went down by 1.64% ($31.60).

This relative performance is a bearish indication, but it’s not as bearish as the fact that gold has just invalidated its small breakout above the declining resistance line.

At the same time, this means that:

It all happened while stocks moved close to their all-time highs. Clearly, the rising stocks won’t be able to push the precious metals sector higher on their own.

In most cases, the most significant signs come from the USD Index, presented on the multi-chart above. However, to check what comes next for the U.S. currency in the near future, we’ll have to zoom in. 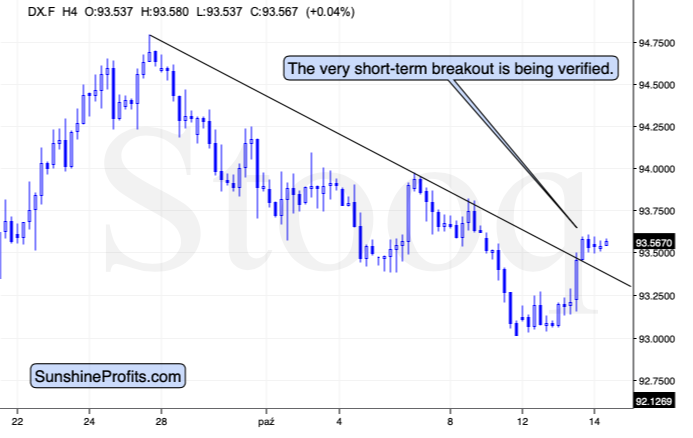 If we look at the index from a very short-term perspective (the chart above is based on 4-hour candlesticks), we can see that the USD Index just broke above its short-term resistance line and is currently verifying this breakout.

This means that while we might see a pause in both: USDX and the precious metals sector in the next several hours (or few days), more decisive moves are likely to follow then. By all means, in case of the USDX, this move is likely to be an upward one, and in case of the PMs, it will most probably be towards the downside.