Is the Gold Rally Overdone? Here's What History Says May Come Next

As you’re probably aware by now, spot gold is trading at an all-time high in nominal terms, having recently hit $1,977 an ounce. Futures touched $2,000 for the first time ever.

Not only that, but according to the 14-day relative strength index (RSI), gold is extremely overbought at 87.5, the highest reading since September 1999. In fact, by my count, there have been only 16 instances since 1980 when gold exceeded 85 on the 14-day RSI, not including the past three days.

So does this mean it’s time for gold investors to take their profits and walk? Not so fast. There’s evidence that the yellow metal could be setting up for even greater gains.

For a lot of investors, it’s conventional wisdom that once an asset or security becomes overbought, the time to sell was yesterday. That rule of thumb worked well for gold between 1980 and 1999.

Look at the chart below. It shows gold’s average return one month, three months and six months after the metal’s RSI exceeded 85. As a note, this happened only nine times in the approximately 20-year period between 1980 and 1999. In all three cases, the price of gold declined on average, with the three-month period giving up the most at 9.78 percent.

In other words, dumping gold as soon as it looked overdone worked in your favor.

Low Yields Have Been a Game-Changer for Gold

That strategy hasn’t played out as well in the years since.

Once again, look below. I’m using the same 14-day RSI and looking ahead at average returns one month, three months and six months after it registered an 85 or higher. This time, though, I’m using data from 2000 and on.

As you can see, things look very different from before. In all three cases, average gold returns were positive, with the six-month period highest at an average 7.3 percent. Taking your profits after gold looked overbought, then, has generally not worked in investors’ favor since 2000. 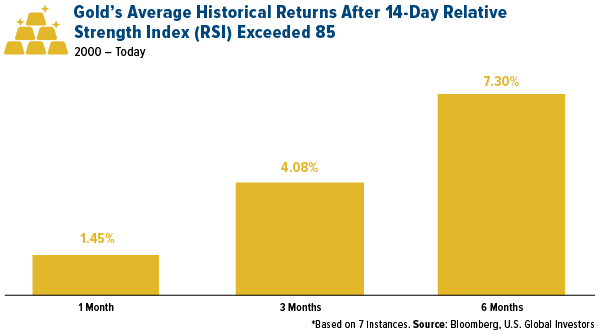 A lot, obviously, but I believe the greatest factor that’s helped drive gold prices higher now versus 30 and 40 years ago has been Federal Reserve policy. In short, low yields have been a game-changer for gold, a noninterest-bearing asset.

Between 1980 and 1999, the yield on the 10-year Treasury averaged 8.6 percent. Thanks to former Fed Chair Paul Volcker’s bold measures to rein in runaway inflation, investors in 1981 were able to lock in a yield as high as 15.8 percent—which I think most investors would jump at today. Gold, by comparison, had a hard time competing.

These are just nominal yields. Adjusted for inflation, they’re lower still—so low, in fact, that they’re currently negative. On Tuesday, the real yield on the 10-year Treasury closed below its previous record low, set in December 2012.

The Start of the Third Great Gold Rally?

In the second RSI chart above, I didn’t factor in the three most recent instances when gold’s RSI exceeded 85 because, well, we don’t have a month’s worth of data yet, let alone three or six months’ worth.

So the question you may be asking is whether it’s too late right now to start participating, if you haven’t already.

Obviously no one can say what the price of any asset will do in the future, but I believe the conditions at the moment are highly supportive of gold and precious metals. Besides negative real yields, we also see unprecedented monetary and fiscal stimulus running into the trillions of dollars and counting. The U.S. economy is in uncharted waters, with GDP estimated to have shrunk a whopping 34.8 percent in the second quarter—the most on record going back to the 1940s.

It's also important to remember that even though gold is trading in record territory right now, it’s actually been higher when adjusted for inflation. Remember what I said earlier about Volcker having to take bold measures? That’s because inflation was surging at an annual rate of more than 14 percent, which helped push the price of gold to still-unseen levels as investors sought a reliable store of value.

We may not have any inflation to speak of right now, but the drivers I outlined earlier are more than enough to create what I believe will end up being the third great gold rally after the one in the 1970s and 2000s. Go gold!

What is a “golden cross,” and what does it have to do with the price of gold? Watch my YouTube video by clicking here!

Related: Gold Is Within Striking Distance of Its All-Time High. Here's How to Play the Rally