Here’s Why Gold Recently Moved Up

Gold moved higher as the USD Index moved lower in today’s pre-market trading. Before providing you with my thoughts on why that happened and what the implications are, let’s see exactly what transpired. 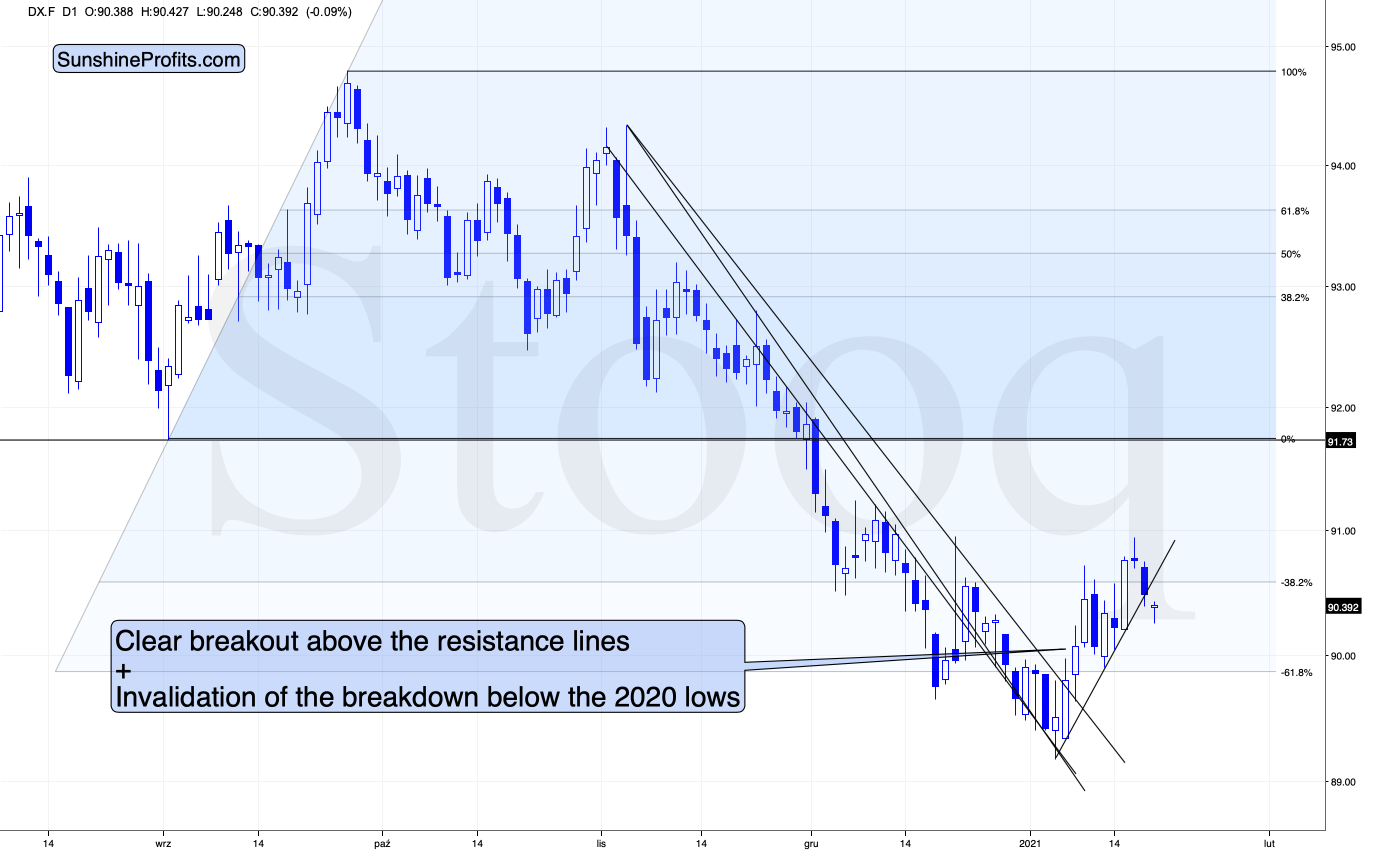 In yesterday’s (Jan. 19) analysis, I commented on the above USD Index chart in the following way:

If the USD Index breaks below it, traders will view the 2021 rally as a zigzag corrective pattern and will probably sell the U.S. currency, causing it to decline, perhaps to the mid-January low or even triggering a re-test of the 2021 low.

If the USD Index performs well at this time and rallies back up after touching the support line, and then moves to new yearly highs, it will be then that traders realize that it was definitely not just a zigzag correction, but actually the major bottom. In the previous scenario, they would also realize that, but later, after an additional short-term decline.

The weak performance of mining stocks that we saw last week, and relatively strong performance of silver (up by 1.24%) compared to gold (up by 0.34%) in today’s pre-market trading suggest that PMs are very ready to slide right now. This – as markets are interconnected – might make the strength in the USD Index more likely than not. In this case, the second above-mentioned scenario would be realized, and the price moves that I’ve been describing for some time now, would gain momentum quickly.

In either case, it seems that the outlook for the precious metals market remains bearish for the short and medium-term. It is only the immediate and very short term that have any notable differences. Therefore, it seems to make sense to keep the short positions in the mining stocks intact.

The USD Index moved lower, and at the moment of writing these words, its trading slightly below the rising support line. Is the more bearish (on a temporary basis) forecast for the USDX and more bullish forecast for gold being realized?

Let’s take a look at gold. 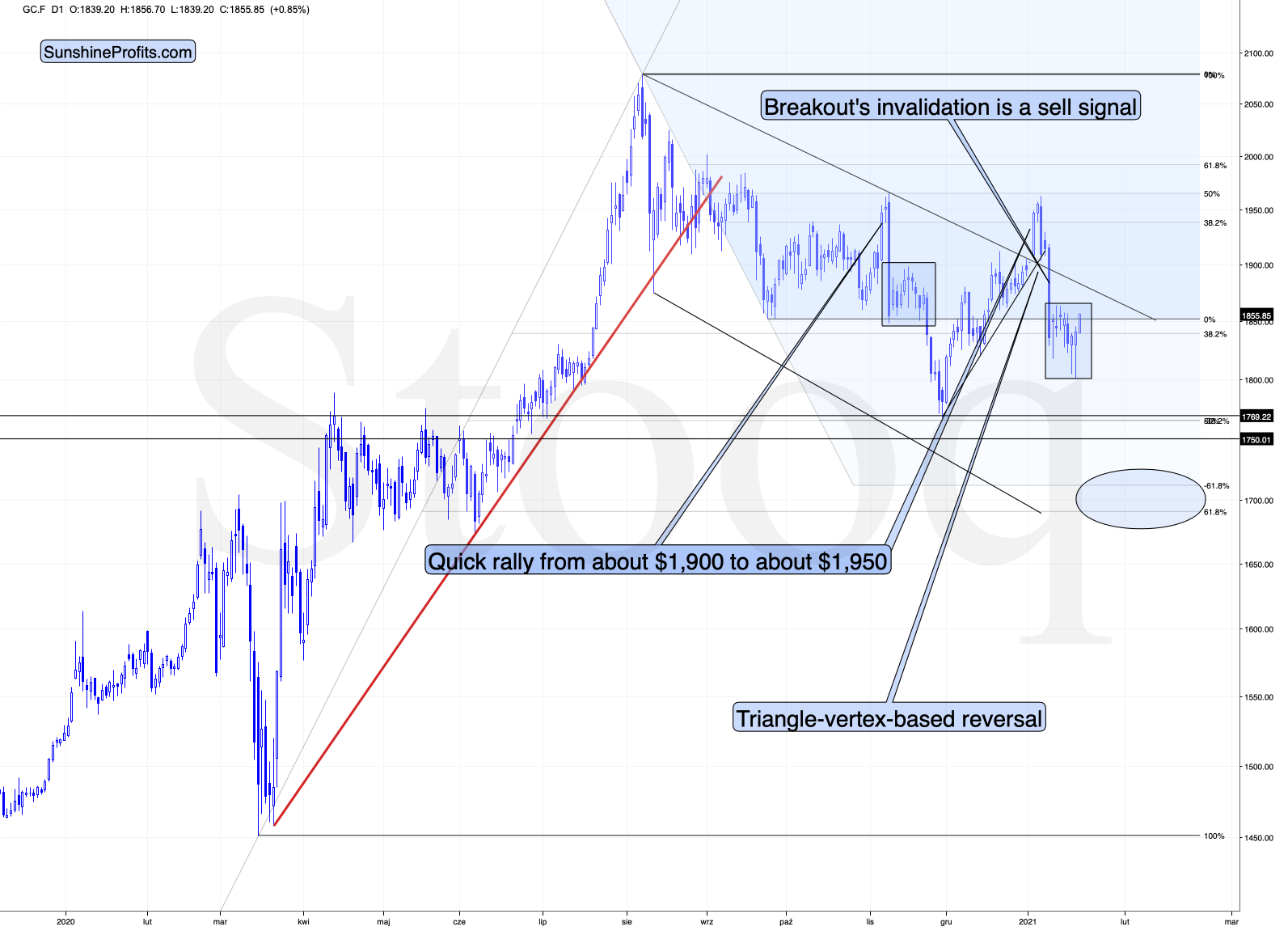 Gold is rallying today, but overall, it remains in a back-and-forth consolidation pattern, which continues to be similar to what we saw in November after a very similar (yet smaller) sharp decline.

Gold moved slightly above its September low in intraday terms, but not in terms of the closing prices. 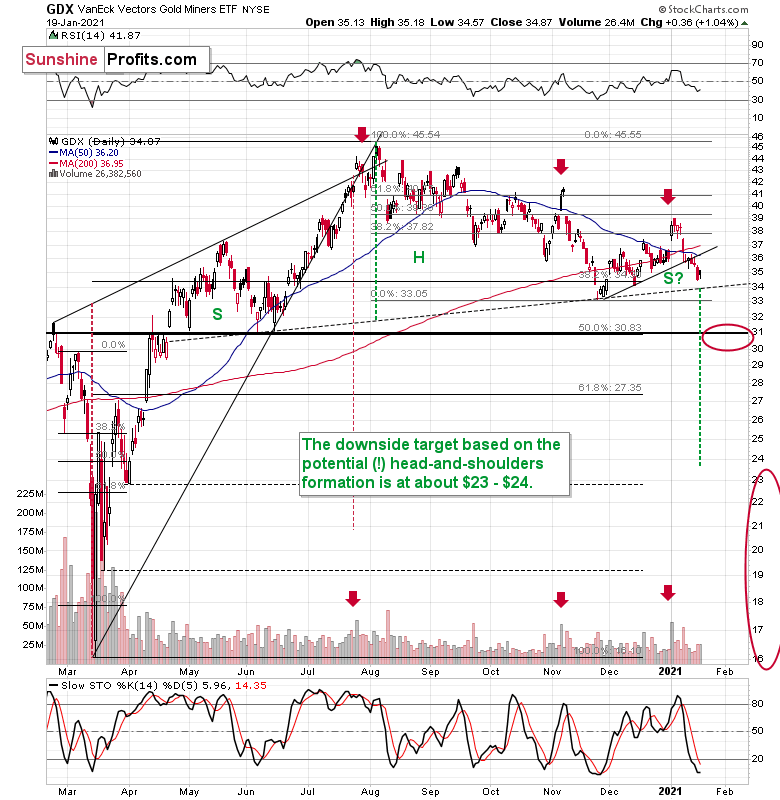 Miners were barely affected yesterday. They moved slightly higher, but it seems to have been just a pause, similar to what we saw in mid-November – nothing more than that.

Ok, so that’s what happened. Before stating that the USD’s breakdown and gold’s strength today are game changers for the very short term, let’s think about the possible explanation for these price moves. Is anything special happening today that makes today’s session at least a bit different than other sessions? Something that could be affecting the USD Index and gold?

Of course, there is something like that! It’s the U.S. President’s inauguration day!

In any case, such a day could affect the temporary market movement, but this year it’s particularly the case, because of the recent Washington D.C. riot and popular conviction that “something might happen” that would prevent the inauguration and effectively allow Donald Trump to remain the U.S. President.

As I explained previously, I think that the probability for seeing the above is extremely low, but at this time, the markets and investors might be worried that this really is something that’s at least somewhat possible. If so, then the USD Index should be moving temporarily lower and gold – being a safe-haven asset – is likely to be moving higher. Of course, only temporarily, because it will soon become clear that the inauguration takes place without any major obstacles. There might be some local protests etc., but nothing that would change the situation in any meaningful manner. Consequently, this is most likely the day when the uncertainties and tension regarding the transfer of power in the U.S. start to decrease. At the same time, it’s likely that they will peak right before decreasing. Therefore, what we’re seeing in the USD Index and gold right now is perfectly understandable and natural. And likely temporary.

This means that the breakdown in the USD Index could be invalidated soon – perhaps even tomorrow (or later today) and the opposite would be likely in the case of gold and silver’s strength. They might fade away quite quickly. Either way, the outlook remains bearish in my view.