Gold Waved the White Flag and Began Its Great Decline

It’s happening! The massive upswing in the USD Index and the slide in the precious metals market are here.

As predicted, the dollar grows stronger while gold goes in the opposite direction. Can we expect a temporary correction next?

Just like you knew in advance. I’m receiving multiple messages where you’re sharing your gratitude with me, and I’m extremely happy that you’re enjoying the results that you were able to get thanks to my help.

All right, what’s next?

First of all, I would like you to keep perspective.

The huge slide that we saw on Friday is most likely just a first step lower. A big step, but just the first one, nonetheless.

Here’s how the situation looks from a long-term point of view. 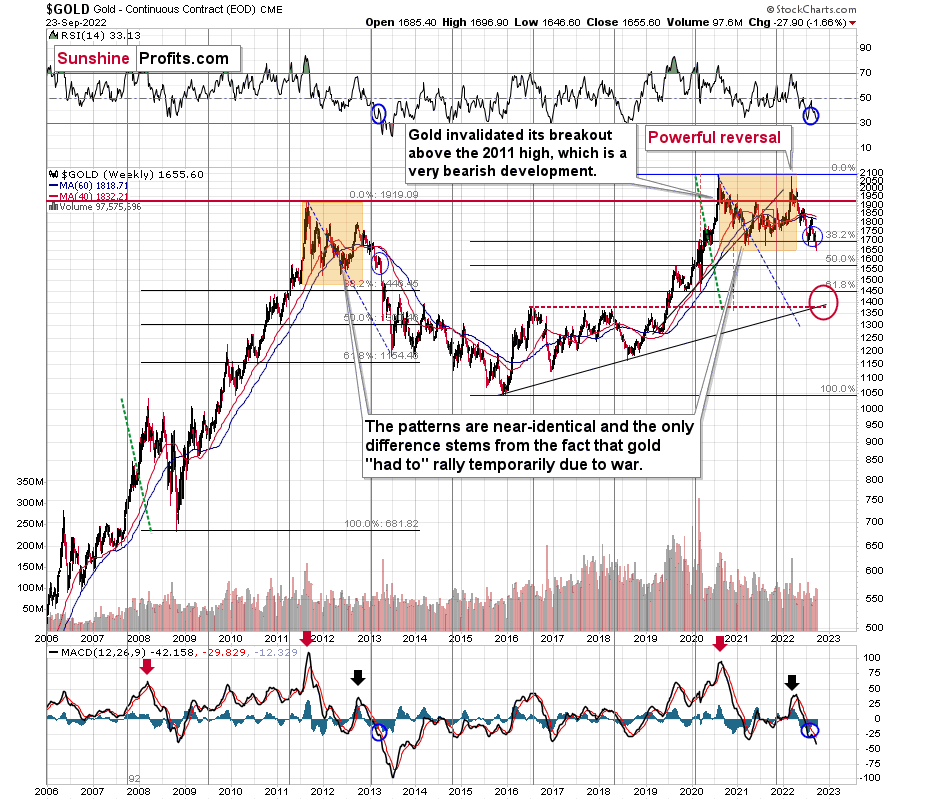 Gold is below its previous lows but not significantly so. Neither the RSI nor MACD indicators suggest that the decline is over – based on the analogy to 2013 that I described more thoroughly on Friday (and in many previous analyses – you knew about this analogy’s existence for months).

Here’s what the situation looks like in the case of the HUI Index – a proxy for gold stocks. 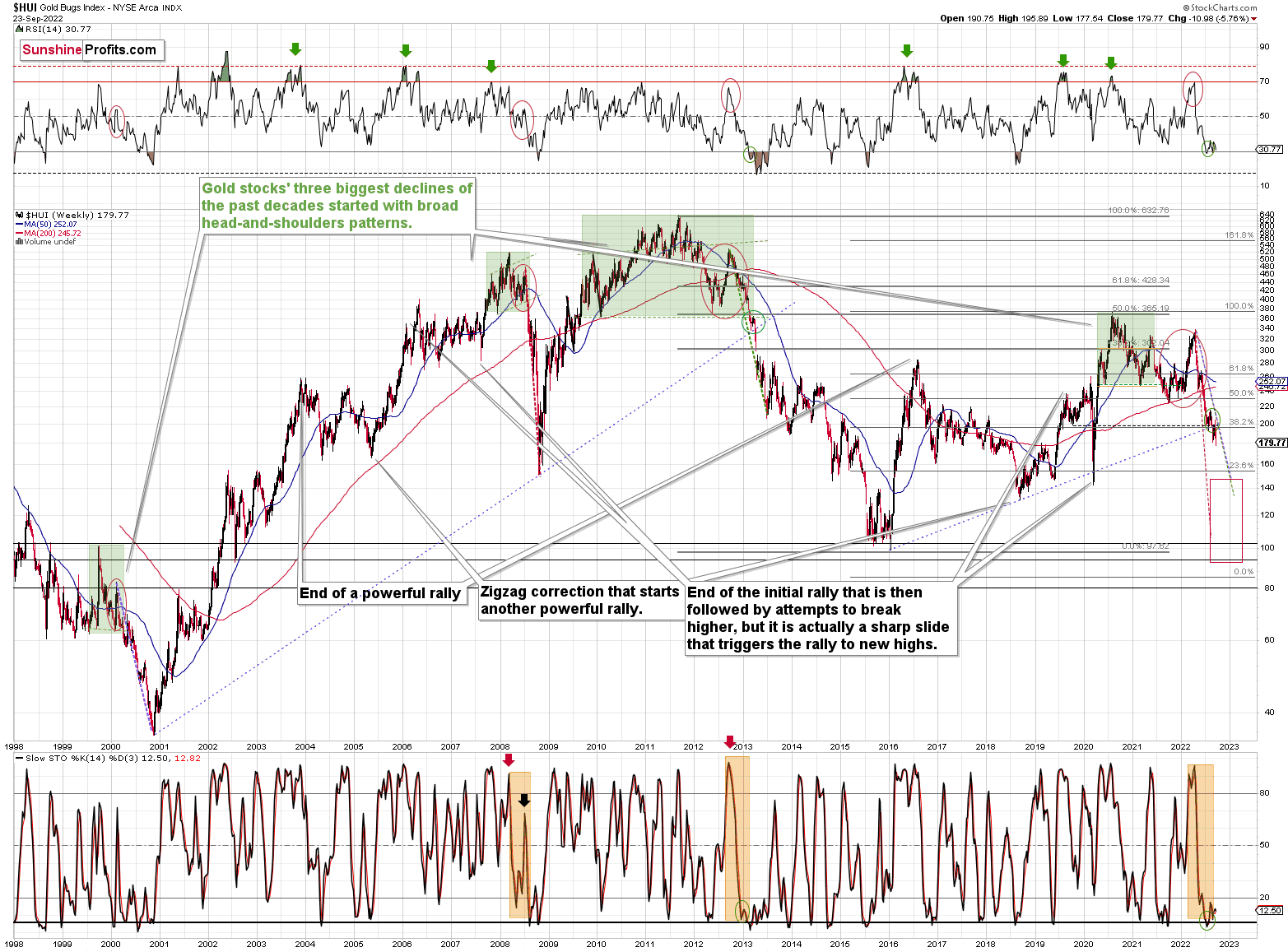 After the breakdown below the long-term support line (based on the 2016 and 2020 bottoms), gold stocks consolidated a bit. This means that the breakdown was verified. This, in turn, opened the door wide open for more significant declines.

Therefore, the fact that miners just declined significantly on Friday – and moved to new yearly lows – is not surprising. It’s a perfectly normal consequence of the breakdown, and something that’s in perfect tune with the analogy to 2013 (and to a smaller extent with the analogy to 2008).

As we zoom in, you can see how big Friday’s daily decline really was. 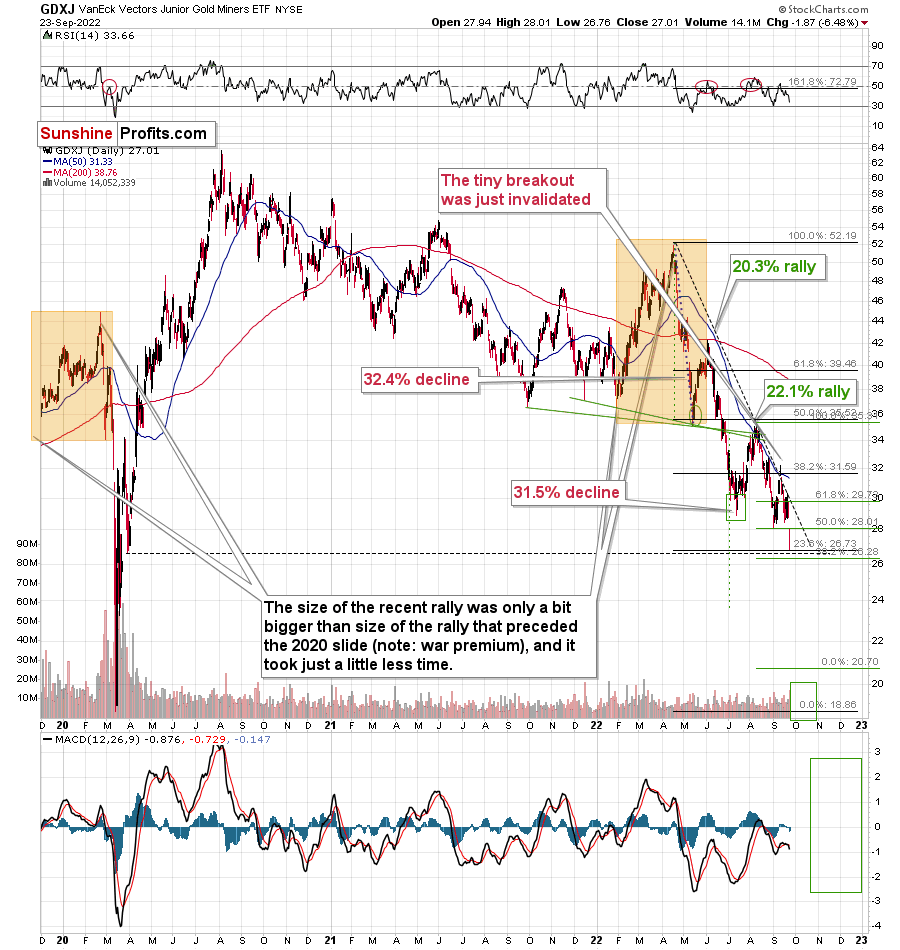 Will we get a temporary correction from the current levels?

We might, or we might not. I previously planned to take profits at – more or less – current price levels, but I dropped this idea based on the fact that we’ve already seen two corrective upswings from below $30 in the GDXJ.

Without those two previous corrections, seeing a correction now would have been very likely. However, they did happen, so now it’s relatively unclear if we’re going to see a corrective bounce or not.

There’s an old Wall St. saying “when in doubt, stay out,” but what most people miss about this saying is that it makes sense as long as one is thinking about a single time-frame. In this case, it is the very short-term outlook that is unclear (next several days or so), and as a consequence, I’m not participating in a very short-term trade.

Not every correction / price move is worth trading – only those with very favorable risk-to-reward ratios. In this case, the corrective bounce ratio is not that favorable. Our profits this year are already huge, so waiting out a relatively short period before they increase even more (of course, I’m not promising any kind of performance) should be rather easy.

Instead of a small corrective upswing, we might see a sharp drop to $20. Missing huge profits on the latter would be much worse than having to wait out a very short-term correction.