$2,000. Think about this number. Theoretically, it’s just a number, one of many. But… somehow we feel that jumping above this level was a big event in the gold market. After all, gold surpassed this psychologically important point for the first time in history, reaching record high, as the chart below shows. 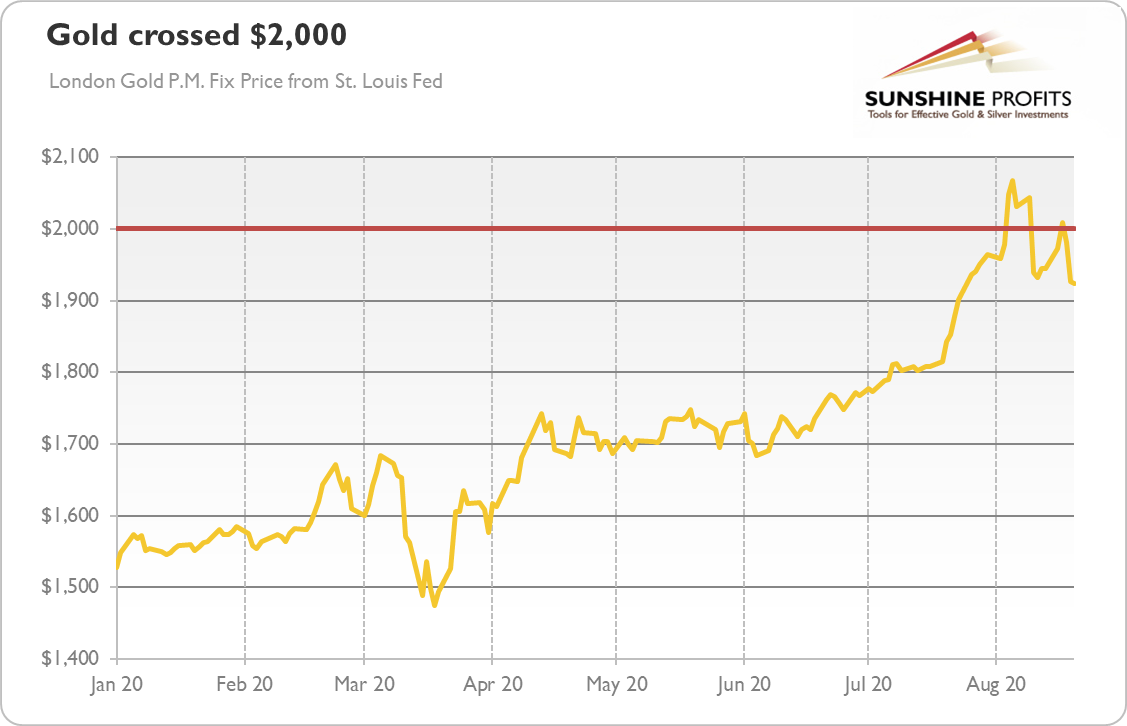 How did gold manage to achieve it? The obvious reason is the coronavirus crisis and its economic consequences. But let’s be more specific. The first driver was the elevated risk perception spurred by the pandemic and the Great Lockdown, which increased the safe-haven demand for gold.

The second explanation is the Fed’s easy monetary policy. It’s true that inflation remains low, but investors should remember that rising goods prices are not the only sign of easy money. The ultra low real interest rates, ballooned Fed’s balance sheet with the broad money supply as well, and elevated equity prices – all these factors reflected the Fed’s ultra dovish stance, and boosted the gold prices.

The third reason is the dollar’s depreciation. As one can see in the chart below, the greenback lost more than 7 percent in value since its March high, reversing a safe-haven rally amid coronavirus crisis. 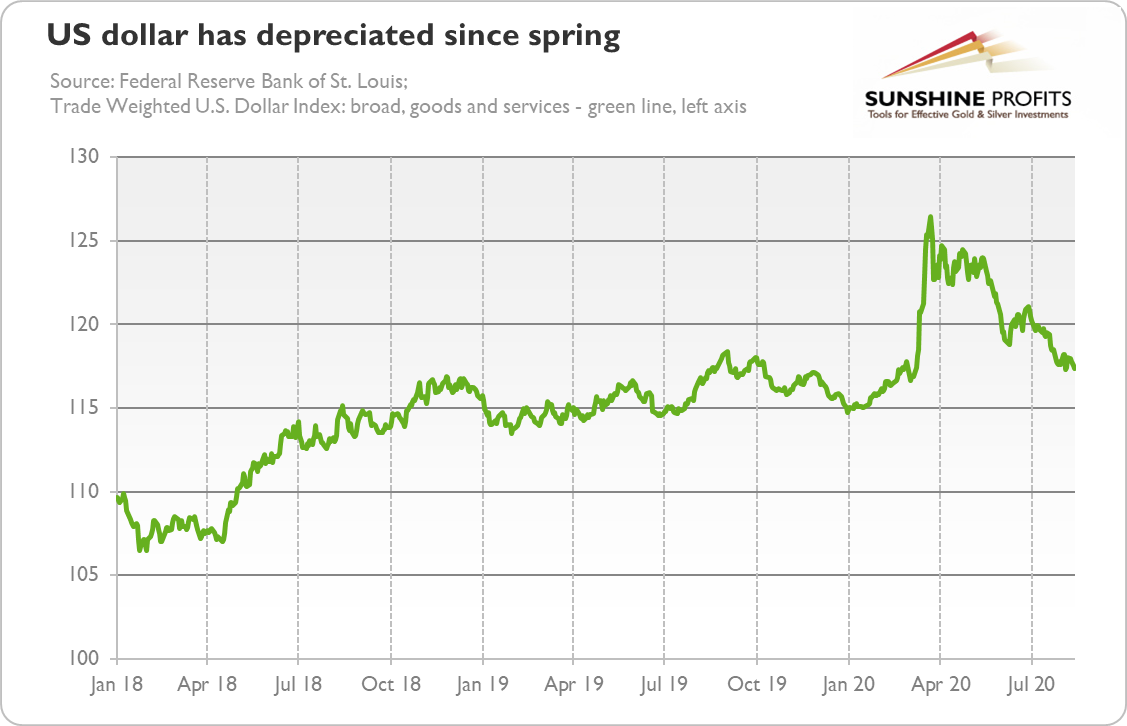 Although the weakening of the U.S. dollar partially reflected the Fed’s accommodative stance and the increase in the risk appetite, we should not forget about investors’ growing demand for a safe-haven alternative to the dollar. I mean here that the loss of confidence in the U.S. government, Trump’s weaponization of the greenback, and trade wars inclined many investors to diversify their investment portfolios. As there is no sensible alternative among other major fiat currencies, some people could switch to gold.

To be clear, I’m not writing about the demise of the U.S. dollar’s, as the reports about its fall are, as always, greatly exaggerated. I’m analyzing here the economic reasons behind the greenback’s sharp depreciation – in order to draw investment conclusions for precious metals investors.

First, the dollar tends to weaken during risk-on episodes, so when market sentiment improved after the worst phase of the coronavirus crisis, the greenback simply corrected after previous gains. Second, the U.S. central bank eased its monetary stance in the response to the economic collapse, slashing interest rates. The lower yields accrued to the dollar-denominated bonds narrowed the divergence in interest rates across the Atlantic (see the chart below), which reduced capital inflows into America and triggered a shift in holdings in favor of other markets. 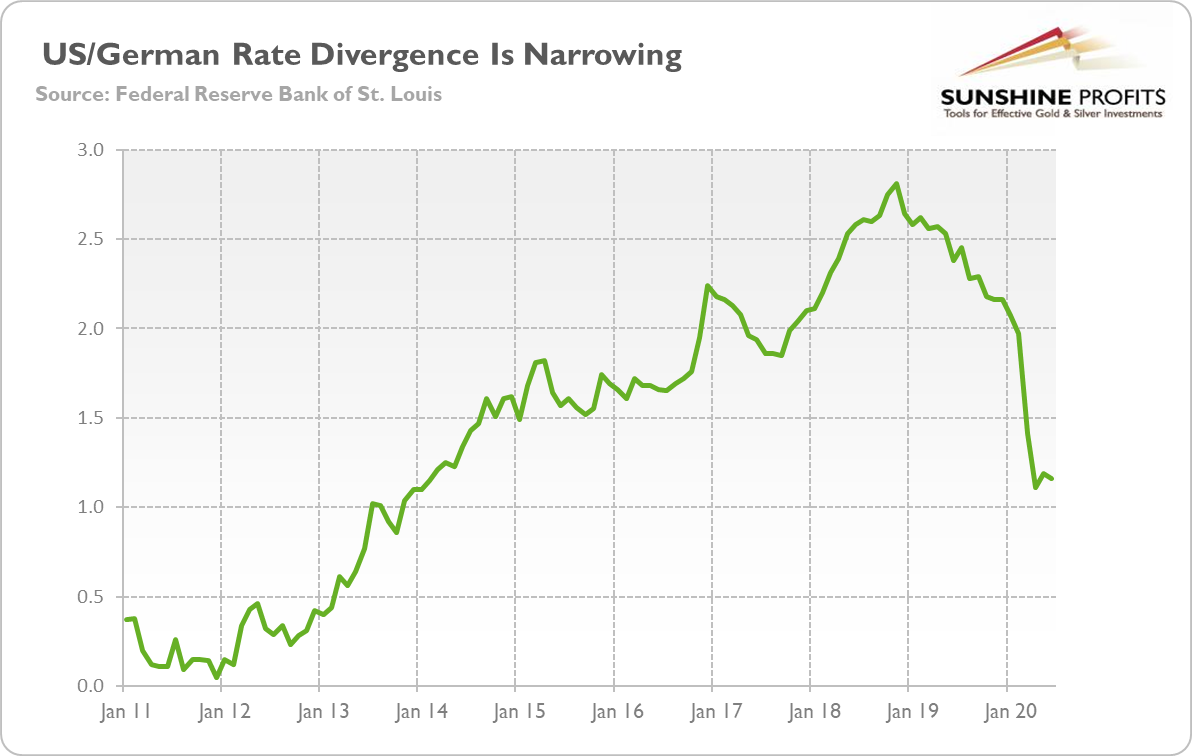 Third, the U.S. did a poor job in containing the coronavirus compared to other developed countries, which worsened its economic outlook and made investors expect ultra low interest rates kept by the Fed for longer. Fourth, the U.S. central bank added massive liquidity into financial markets and activated currency swaps with other central banks, increasing the supply of greenbacks. Fifth, the Fed is effectively monetizing massive fiscal deficits, which also leads to large external deficits.

So, what’s next for the dollar and gold? Well, with improving health and economic situation in the U.S., the downward pressure on the greenback should weaken. On the other hand, the adopted ultra dovish stance makes the Fed similar to the ECB and the Bank of Japan, which should maintain the downward pressure on the dollar. In other words, it seems that the U.S. dollar could rally again only if there is another risk-off moment, such as the second wave of infections in Europe or the financial crisis. But gold should move in tandem with the greenback, then.

Summing up, gold has recently jumped above the psychologically important level of $2,000, while the U.S. dollar depreciated sharply. Some analysts link these two events and claim that the gold’s rally was caused by the dollar’s depreciation. Although it certainly helped, please note that the greenback lost just about 7 percent, while gold gained about 40 percent since spring. So, it seems that in the current environment of very dovish Fed, ultra low real interest rates, and high public debt, gold can shine even without serious weakness in the dollar.

That’s great – but even greater is the fact that it is likely that the greenback started a cyclical decline in spring amid the banana-republic-style money creation and debt monetization by the Fed. There could be a rebound in the short-term (for example, because of negative economic data out of the Eurozone economy), but I wouldn’t be surprised if the U.S. dollar would be next year below the current levels. It goes without saying that gold would benefit from further potential depreciation of the greenback.