The price of gold has declined further amid incoming U.S. President Joe Biden’s fiscal stimulus and poor economic data, which is a bearish sign.

The weakness in the gold market continued last week. As the chart below shows, the London P.M. Fix declined below $1,840 last Friday (the price of the yellow metal later declined even further, i.e., below $1,830). 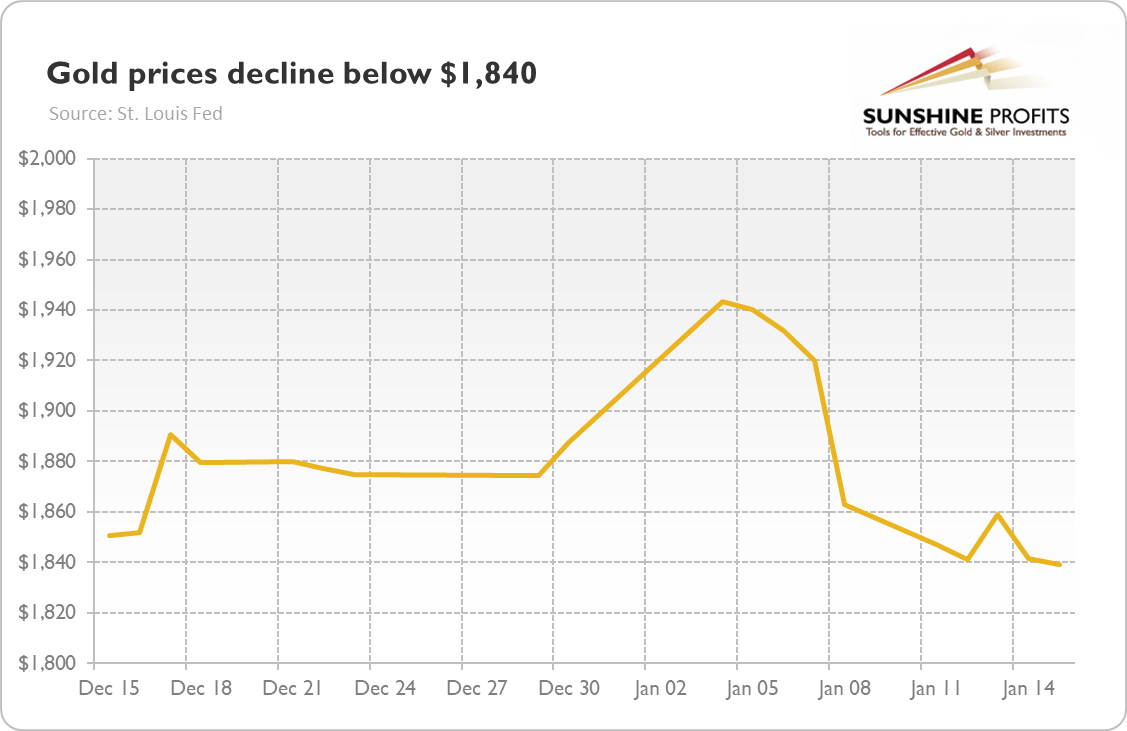 The downward trend is a bit disturbing given the poor economic data reported last week. First, the jobless claims increased from 784,000 on January 2 to 965,000 on January 9, 2021 , as one can see in the chart below. This increase surpassed market expectations and indicates that there is a long way ahead for a full recovery in the U.S. labor market. 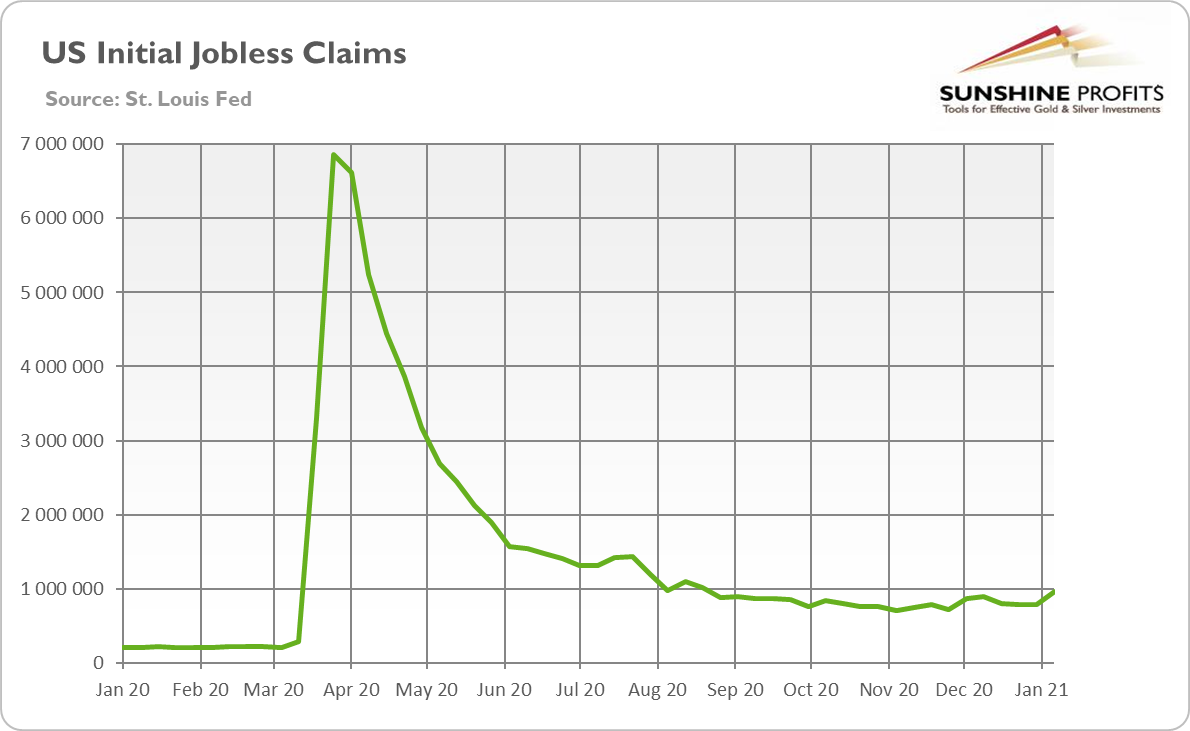 Second, U.S. retail sales declined 0.7 percent in December from the previous month . Importantly, the decrease was larger than the expected 0.1 percent drop. Third, the Empire State Index increased 3.5 percent in January. Although the index grew, it rose at a slower pace than in December and below expectations.

All these economic reports show that the U.S. economy has slowed down, and that we could see more stimulus coming in an effort to stimulate economic growth. Indeed, on Thursday, Jerome Powell excluded any tapering of the quantitative easing in the near future , saying that he “expect[s] that the current pace of purchases will remain appropriate for quite some time”. The recent weak economic data that show slack remaining in the labor market can only reassure the Fed that it should continue providing accommodation and not think about raising interest rates .

Moreover, on Thursday (Jan. 14), Biden unveiled a massive stimulus plan worth $1.9 trillion to support the economy amid the COVID-19 epidemic . The aid package, that would be on top of the $900 billion stimulus adopted by Congress in December, includes $1 trillion in direct checks to Americans, about $440 billion for small businesses particularly strongly hit by the epidemic, and about $415 billion to fight the coronavirus and speed up the distribution of vaccinations.

The continuation of the dovish monetary policy and expansion of the easy fiscal policy should theoretically send the price of gold higher.

They should, but gold has gone south instead. Therefore, the drop in the price of gold amid poor economic data, Powell’s remarks, and Biden’s announcement is a bearish signal .

However, it might be also the case that we will see a replay of March, when the first wave of the pandemic initially hit the precious metals market. Investors were stocking up cash then, selling both equities and gold. We observed a similar pattern on Friday, so we could see a reversal after some time.

Moreover, Biden’s fiscal aid, if adopted, would increase U.S. government spending, budget deficit and public debt even further. As a reminder, the federal government spent a record $6.5 trillion in fiscal 2020, while the national debt has already risen by almost $7.8 trillion during Trump’s presidency. According to the Committee for a Responsible Federal Budget’s projection from early January, the U.S. fiscal deficit would total $2.3 trillion for fiscal 2021. However, with Biden’s new stimulus, it would be much larger and could even surpass the record deficit of $3.1 trillion for the last fiscal year.

So, the ballooning fiscal deficits and debts, together with a recession caused by the pandemic and the Great Lockdown , should be sufficient reasons to be cautious and hold part of one’s investment portfolio in safe-haven assets such as gold . Yet many investors are still turning a blind eye to the negative effects of a fiscal stimulus. But just because they cover their eyes, the elephant will not disappear from the room. Indeed, the gold elephant – and gold bull , his cousin – will not disappear, although they may hide for a while .