Fed Will Not Hike Rates For Years. Gold Should Like It.

The latest FOMC statement and economic projections signal are that the interest rates will stay at zero until the end of 2023. This is excellent for gold.

Yesterday, the Fed issued a statement regarding the FOMC meeting, which was held from September 15-16. The US central bank kept the interest rates and the conditions of its quantitative easing unchanged. The chart below shows the levels of effective federal funds rate and the Fed’s balance sheet. 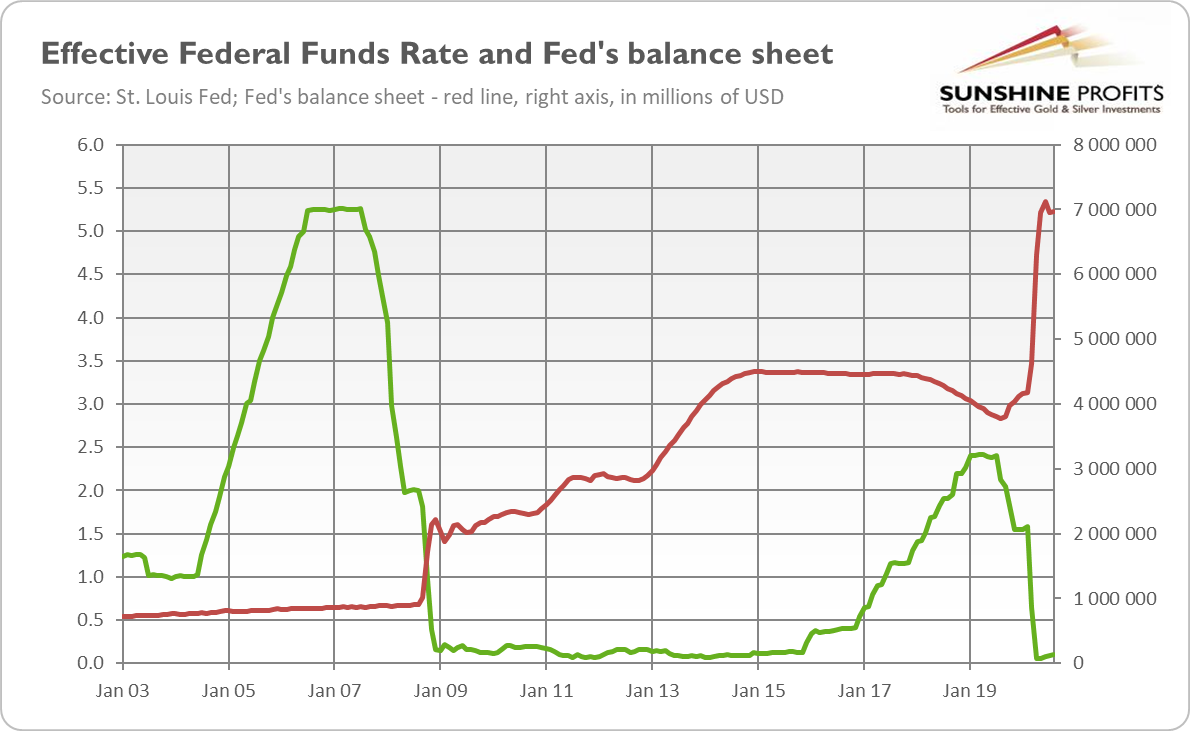 Nevertheless, the statement is changed significantly from the July edition, as it reflects the central bank’s new monetary strategy adopted in late August, which assumes the targeting 2-percent inflation over time and not on a yearly basis.

Second, and perhaps even more importantly, the Fed announced that the new economic conditions must be met before the interest rates are hiked. Previously, the US central bank would start its tightening cycle when they’re confident that the economy “is on track to achieve its maximum employment and price stability goals”. Except for this time, the Fed will not move the federal funds rate until the inflation reaches 2 percent and is on track to rise above this level:

The Committee decided to keep the target range for the federal funds rate at 0 to 1/4 percent and expects it will be appropriate to maintain this target range until labor market conditions have reached levels consistent with the Committee's assessments of maximum employment and inflation has risen to 2 percent and is on track to moderately exceed 2 percent for some time.

What does the above mean for the gold market? Well, the Fed’s statement is clearly dovish as it signals that the Fed will not drop its policy of zero interest rates for years to come. The US central bank made the tightening starts dependent on more rigorous conditions, and since the ultra-low nominal bond yields and the negative real interest rates will stay with us for much longer, investors should get used to them, which should provide support for the gold prices in the process. However, as the statement demonstrates, the Fed's monetary framework's already known changes don't have to affect the gold market in the short-term significantly.

Besides their monetary policy statement, yesterday, the FOMC also issued its fresh economic projections. Notably, it is stated that the GDP growth will be higher this year, but eventually lower afterward. Furthermore, inflation will be higher as well, while the unemployment rate lower, as the table below shows. 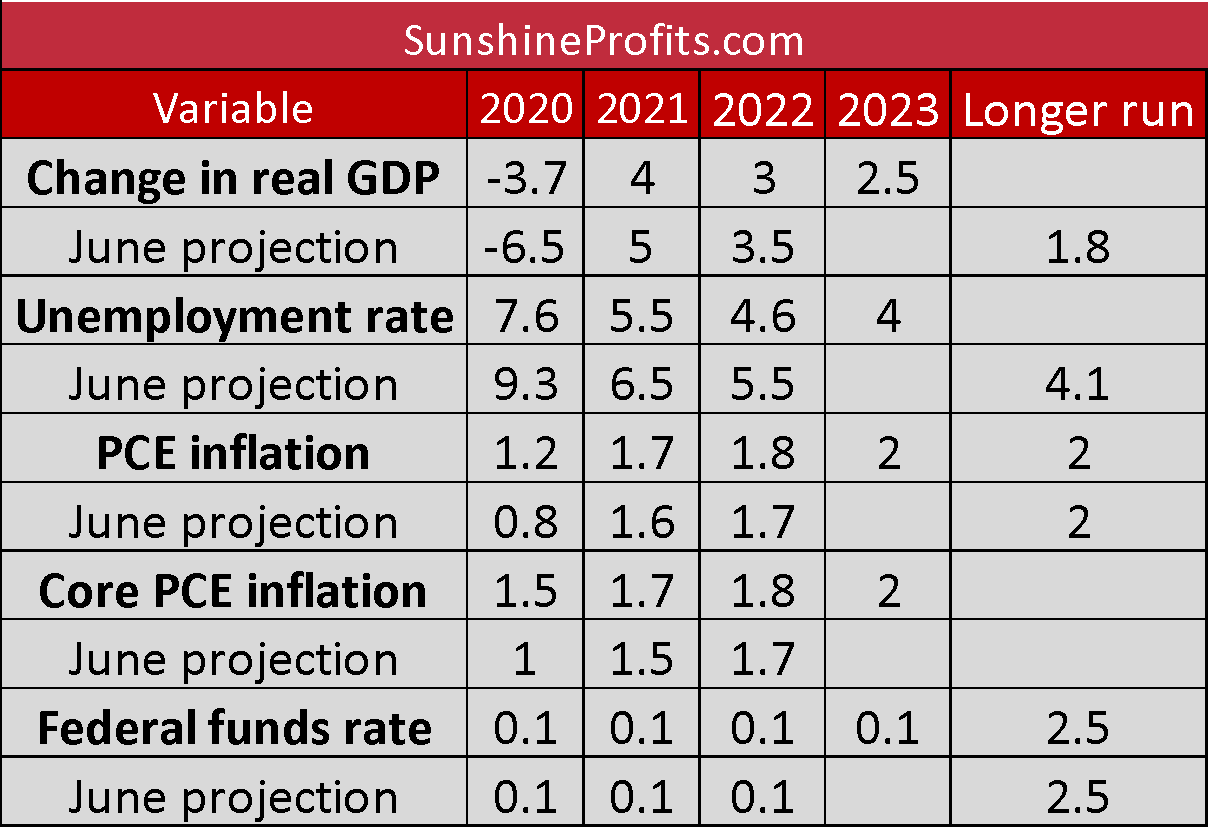 The unemployment rate is forecasted to be “only” 7.6 percent in 2020, compared to the 9.3 percent seen in June. The fact that the recovery has progressed quicker than expected is bad news for the gold prices. But still, the overall economic activity remains well below the pre-pandemic level.

When it comes to the PCE inflation, the FOMC now sees higher inflation in 2020 (1.2 percent) than June when they expected only 0.8 percent. However, the FOMC projects that the inflation rates will be below their target until 2023, which is an excellent excuse for continuing their dovish monetary policy, thus supporting gold prices in the process.

Indeed, the dot-plot shows that the Fed wants the federal funds rate to remain near zero at least until the end of 2023. As Powell stated in June: “We’re not even thinking about raising the rates.” From a fundamental point of view, this is also excellent news for gold, which flourishes under ZIRP and negative real interest rates. However, besides the fact that the Fed’s statement and dot-plot were quite dovish, and especially amid the improvements in the Fed’s near-term outlook, the price of gold declined yesterday, which is a bearish performance. It might be the case that investors expected even a much more dovish signal, or they just focused on the fact that the Fed upgraded its economic forecast for GDP for 2020.