The latest FOMC minutes were dovish, especially in light of the recent increase in inflation. That’s good for gold.

Last week, The Federal Open Market Committee (FOMC) published minutes from its last meeting in March . They show that – in light of positive economic indicators – the members of the Committee turned out to be more optimistic about the U.S. economy since the previous meeting. But this is what we already know from the March economic projections.

What is new and much more important is that Fed officials expressed the view that despite all the progress, the economic situation remained unsatisfactory with many indicators still far from the pre-pandemic level and the Fed’s long-term targets:

Despite these positive indicators and an improved public health situation, participants agreed that the economy remained far from the Committee's longer-run goals and that the path ahead remained highly uncertain, with the pandemic continuing to pose considerable risks to the outlook.

In consequence – and this is probably the key message from the recent minutes – the FOMC members reaffirmed that they are in no rush to taper the quantitative easing . Furthermore, the U.S. central bank will announce a change in the pace of asset purchases well in advance:

And the hike in the federal funds rate will happen only after the start of the normalization of the Fed’s balance sheet . So, given a lack of any communication in this regard, investors shouldn’t expect any increases in the interest rates for years .

Last but not least, the Fed not only started to expect higher inflation – as a reminder, the FOMC participants expect 2.4 percent PCE inflation in 2021 – but it also “viewed the risks of upside inflationary pressures as having increased since the previous forecast”. However, the central bankers still believe that the increase in inflation this year will be transitory due to the base effects and supply disruptions:

In the near term, the 12-month change in PCE prices was expected to move above 2 percent as the low inflation readings from the spring of last year drop out of the calculation. Most participants also pointed to supply constraints that could contribute to price increases for some goods in coming months as the economy continued to reopen. After the transitory effects of these factors fade, however, participants generally anticipated that annual inflation readings would edge down next year.

What do the recent FOMC minutes imply for the yellow metal? Well, the increase in expected and actual inflation rates combined with the Fed’s dovish stance could create downward pressure on the real interest rates and the U.S. dollar, thus supporting gold prices . The yellow metal could also benefit from the elevated demand for inflation hedges in an environment of stronger upward pressure on prices.

Indeed, the price of gold jumped shortly on Thursday (Apr. 8) above $1,750, as the chart below shows. This upward move was temporary, though, but that can change soon, as the inflation genie has popped out of the bottle. 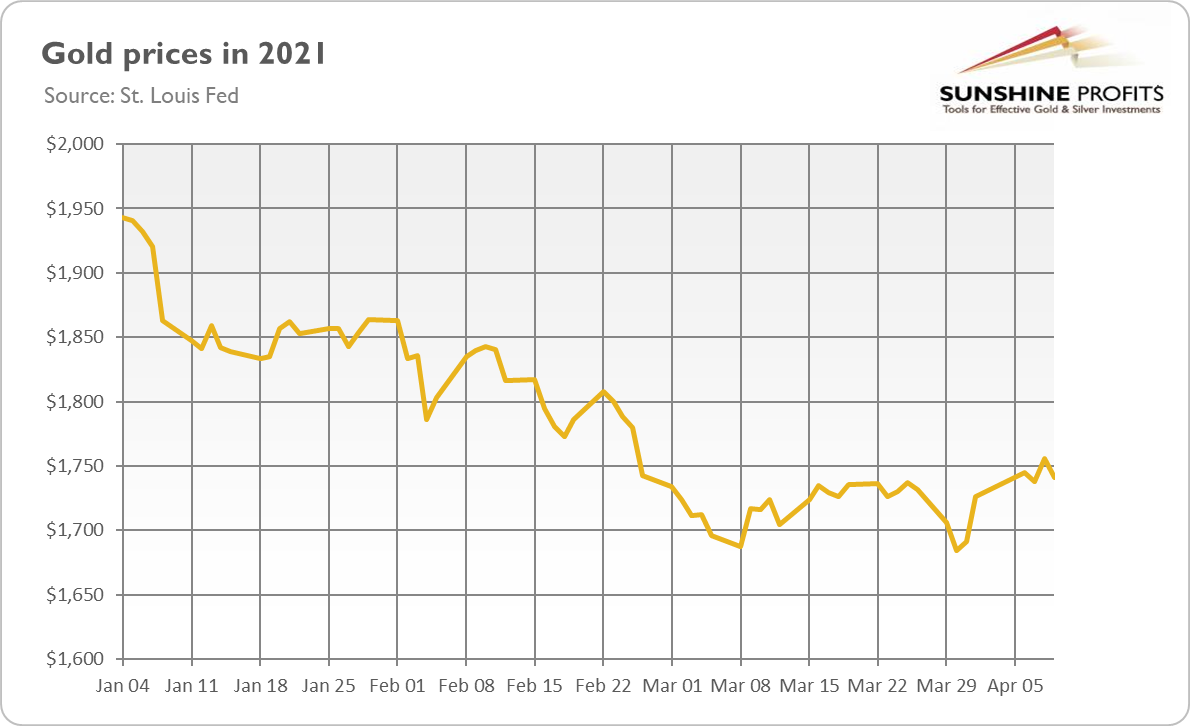 The Producer Price Index increased by one percent in March , twice more than in February, and significantly above the expectations of a rise of 0.4 percent. As well, the final demand index moved up 4.2 percent for the twelve months ended in March, the largest increase since September 2011. Meanwhile, the index for all commodities surged even more (12 percent!), in the fastest pace since the Great Recession , as the chart below shows. Importantly, the Consumer Price Index has also been rising recently (I will cover this report in the next edition of the Fundamental Gold Report). 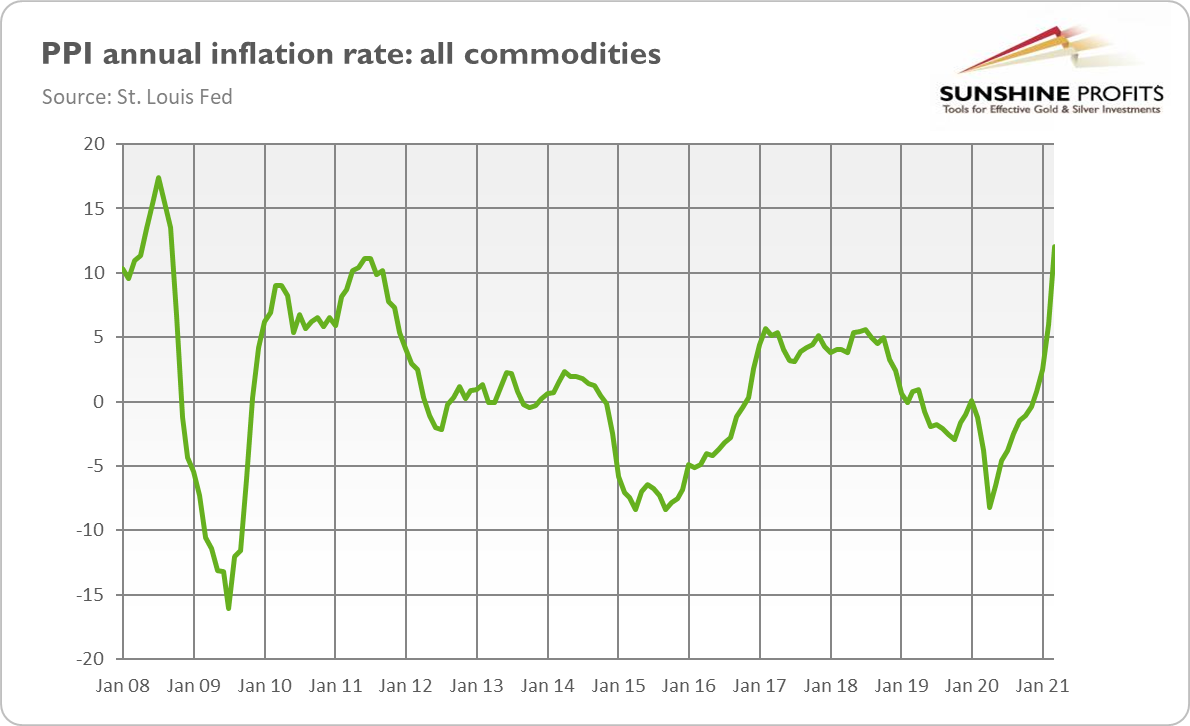 Of course, the rise in inflation may also increase the nominal bond yields, which could be negative for the gold market. However, the rally in the bond yields was mainly caused by the fact that investors priced in a more aggressive path of the federal funds rate than the FOMC members have indicated. But after the recent minutes it seems that these traders are starting to capitulate and will not fight the Fed anymore. This would be good news for the gold market.

Indeed, the second quarter started much better for the yellow metal than the awful beginning of the year, and there are some reasons (dovish Fed, higher inflation, limited potential for further rally in the bond yields) for cautious optimism. But the key problem is that the Fed is still relatively hawkish compared to the Bank of Japan or the European Central Bank . Well, we will see, stay tuned!

Related: U.S. Labor Market Is Recovering. Will Gold Too?