Does Debt Matters For Economy and Gold?

The U.S. passed a milestone! The federal debt in private hands surpassed 100 percent of GDP measured quarterly, in the second quarter of 2020. On an annual basis, it would exceed the size of the economy next year, due to a massive fiscal stimulus and a plunge in revenues amid the coronavirus crisis (however, the fiscal deficits and debts were already increasing significantly prior to the outbreak of pandemic ). According to the Congressional Budget Office , the fiscal deficit will reach $3.3 trillion in 2020, more than triple the shortfall recorded last year. At 16.0 percent of GDP, the budget deficit would be the largest since the World War II. Is the US waging a war I don’t know about?

As a consequence of massive fiscal gap, the federal debt held by the public is projected to rise abruptly, from 35 percent in 2007, before the Great Recession , and 79 percent in 2019 to 104.4 percent in 2021 (or $21.9 trillion), and 107 percent in 2023, the highest level in the nation’s history, as the chart below shows. The gross federal debt to GDP, which includes intergovernmental holdings or debt owned by some federal agencies, such as Social Security trust funds, is even higher (it surpassed the economy's size several years ago). 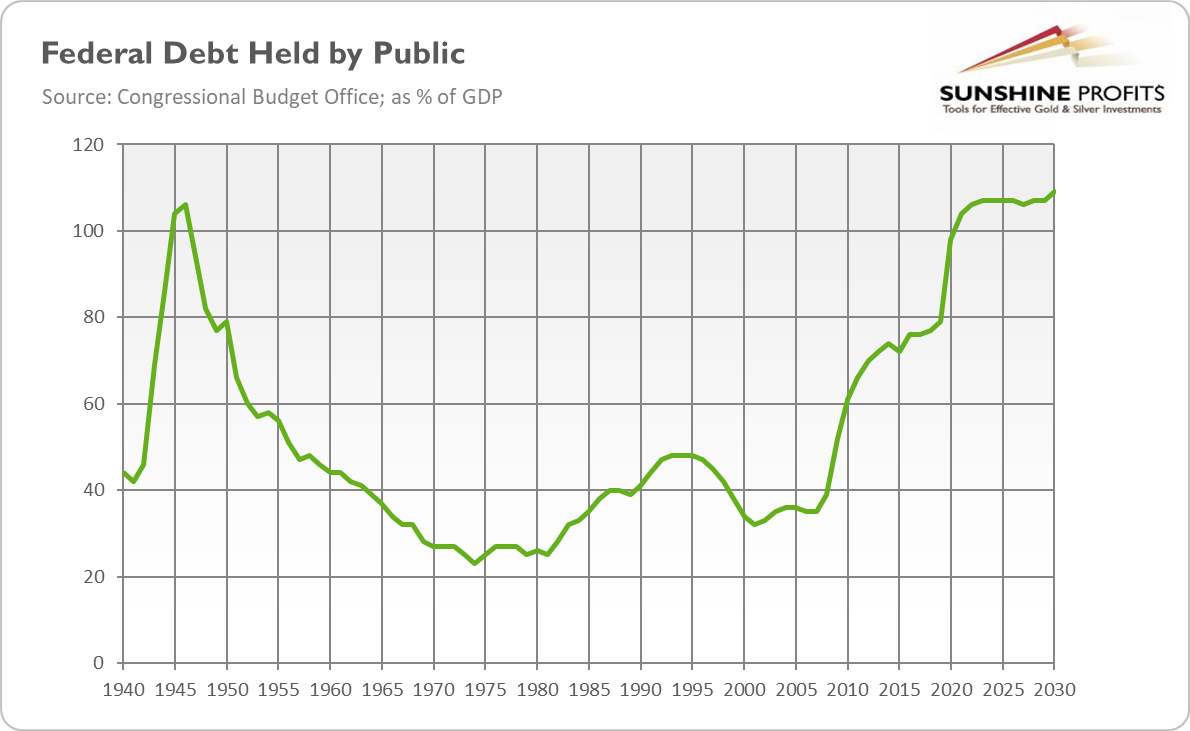 But does all this debt matter, or should we stop worrying and love the (debt) bomb? You see, some mainstream economists, including the most renowned ones, argue that debt is not a problem in the current world of ultra-low interest rates . As long as the interest rate on government debt is lower than the GDP growth, we can roll over debt, and the debt-to-GDP ratio will slowly decline over time.

It’s hard to argue with mathematics. However, there are three critical problems here, which are hidden in the beauty of algebra. First, at some point, the public debt begins to drag down economic growth . This is because the current high public debt results from excessive unproductive government spending that extracts resources from the private sector, crowding out more productive spending.

Second, the current happy environment of ultra-low interest rates may not last forever . It may merely be not scalable. As John Cochrane asks :

Bond market investors lend 100% of GDP to the US government at 1% interest. Will they lend 200% of GDP at the same low interest rate, or will they start to require higher interest rates?

In other words, there is a limit of debt, beyond which markets will not lend and we will face a sovereign-debt crisis. This limit may be significantly higher than the current level of debt to GDP, but it exists. And finding this limit will be painful. You see, the debt crisis comes always as a surprise. Lehman Brothers borrowed at low rates until it didn’t. Greece borrowed at low rates until it didn’t.

The third problem is that we can indeed roll over debt infinitely without destabilizing the debt-to-GDP ratio only when the government runs a primary surplus (revenues are greater than spending excluding debt interest payments), and the budget is structurally balanced. Yes, you guessed – this is not the case. The US government runs primary deficits , adding to the pile of debt, even though bond yields are lower than the GDP growth. Politicians are unable to produce balanced budgets as they want to support current consumption to please the voters.

Hence, the debt really matters, and it would need to be addressed eventually . How? Painfully. Through financial repression and inflation. That is how the US exited a massive debt-to-GDP ratio from WWII. True, the economic growth was fast, while the government ran primary surpluses for decades. But it’s only part of the story. The other is that interest rates were kept artificially low, while high inflation occurred in the late 1940s and devaluing much debt in the 1970s. Given the current sluggish growth and fiscal irresponsibility, the government will have to rely even more on inflation and financial repression.

So, the risk of either debt crisis or inflation outbreak to devalue the indebtedness should support the demand for gold as a safe-haven and as an inflation-hedge and, thus, the gold prices. The unpleasant truth is that the world fell into the debt trap – and the longer it sits there, the harder the escape will be. And the larger will be the expansion of the Fed’s balance sheet , due to the monetization of debt, and the more extended period of negative real interest rates , which should be bullish for gold.

Related: Further Price Pressure as the USDX Is About to Rally