It’s tempting to ride the silver rollercoaster. After-all, gold’s volatile little brother is just that – volatile. Its wilder price swings make some of the investment public believe they can profit from it more quickly. However, it’s important to remember and take note of the fact that silver (or gold and miners for that matter) should not be judged on its own when making a purchasing decision. It’s a bit more complicated and other factors come into play, such as relative strength.

One must track the precious metals’ performance against equities or the USD Index. Asking questions is prudent; how is silver doing compared to gold, and why? The USDX is moving lower but the PMs are not rallying? Hmmm, is there enough strength for them to break out? Silver or gold don’t exist in a vacuum. Instead, their performance has to be judged relative to other factors. 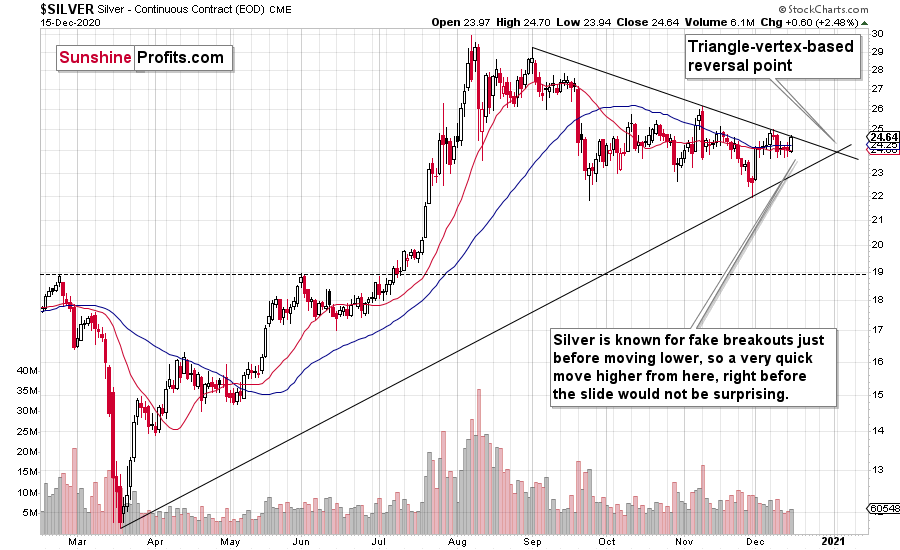 This is exactly what silver tends to do right before significant declines – it’s exceptionally strong – more than gold and mining stocks. Why would this be the case? Because silver is a relatively thin market, where many institutional investors can’t go as there’s not enough silver for them. The “big players” generally go for gold, and silver is favored by the investment public. The silver manipulation theories are making the demand among the investment public even stronger, and the investment public (as a general group, not any individual person) tends to enter the market close to the tops.

The above-mentioned factors – along with the relatively small size of the silver market – make the white metal perform very well (too well) near the local tops. Of course, this doesn’t work each and every time, just like any other trading technique, and one should also look for additional confirmations before making a trade (like weak miners , which tend to react differently than silver).

It does imply, however, that it’s best not to take silver’s strength at its face value, and definitely not to view it as bullish unless it’s confirmed by the rest of the precious metals sector. Today’s breakout in silver and lack thereof in gold is not a bullish development, but a bearish one.

Moving on to the performance of the mining stocks, let’s take a look at the chart below. 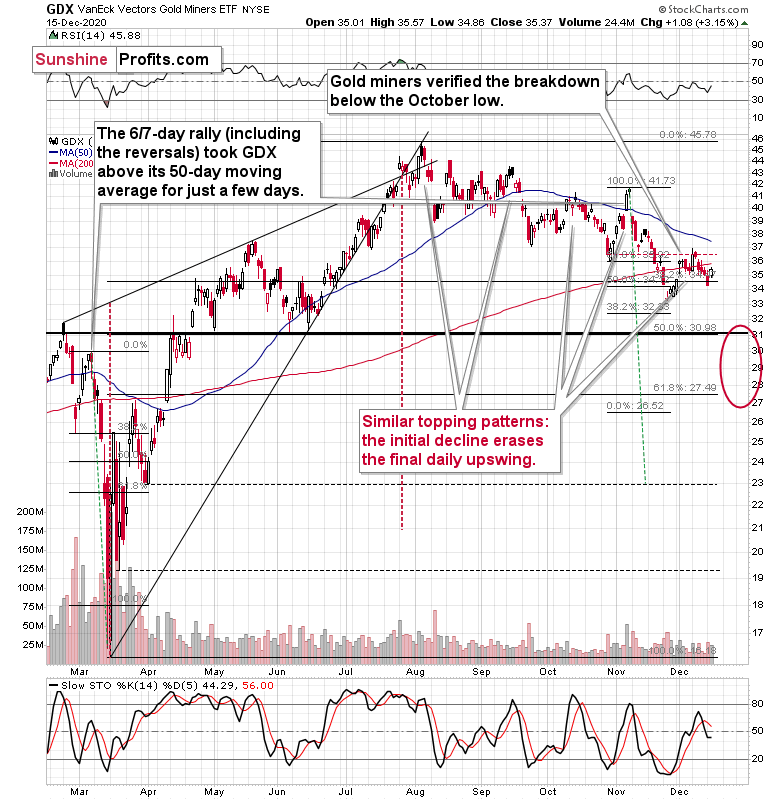 The GDX ETF – proxy for precious metals mining stocks – moved higher yesterday, more than nullifying the previous day’s decline. But, overall, was it really strong? Absolutely not. In today’s trading on the London Stock Exchange, the GDX is up only a bit above Tuesday’s intraday highs, and it corrected only a bit more than a half of the December decline.

The above is a perfectly bearish combination on the relative strength front. Combining this with USDX’s proximity to its target area makes the overall implications for the precious metals market very bearish.