Traders and investors are keeping a close eye on the oil market as prices have largely remained above $40 per barrel for several weeks.

Some are concerned that the recent market rally may be unsustainable, especially in 2H20, if the global economic recovery that economists currently expect fails to materialize.

Daily Brent crude oil spot prices averaged $43 per barrel in July, according to the EIA, which is up $3 per barrel from the average in June and up $25 per barrel from the multiyear low monthly average price in April. Nonetheless, OPEC is worried about keeping oil prices above $40 per barrel in the future. OPEC said it expects world oil demand to drop by more than 9 million barrels per day in 2020 compared to a previous expectation of a decrease of fewer than 9 million barrels per day for the year.

OPEC kept its forecast that in 2021 oil demand would rebound by 7 million barrels per day but remains concerned that a second global Covid-19 wave will prolong the global oil inventory overhang. OPEC wants to lift its output by 6 million bpd in 2021, but this may prove extremely difficult if demand stays suppressed.

In the US Energy Information Agency (EIA)’s August Short-Term Energy Outlook, they expect high inventory levels, and surplus crude oil production capacity will limit upward price pressures in the coming months. Still, as inventories decline into 2021, those upward price pressures will increase. The chart below shows a massive shift between the 2Q and 3Q of 2020 with an implied stock drawdown of nearly 5 million barrels in 3Q20 and a nearly 4-million-barrel drawdown in 4Q20 as world consumption outstrips production on expectations of a global economic rebound in 2H20. 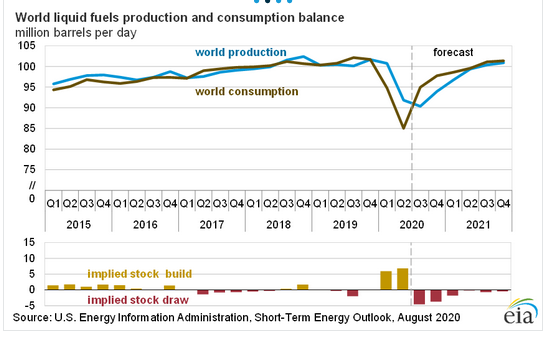 Expectations of oil prices remaining lower for longer have prompted some oil companies like BP (NYSE: BP) to announce a strategic shift away from oil production. Earlier this month, BP announced in a press release that the company “introduces a new strategy that will reshape its business as it pivots from being an international oil company focused on producing resources to an integrated energy company” with plans to cut upstream oil and gas production 42.3% in 10 years to 1.5 million barrels per day.

Related: Will the US Airline Sector Navigate the Winds of Uncertainty?