Gold plunged to $1,800. What does this imply for the gold market?

Whoa! Tuesday, November 24 wasn’t too good for gold. The price of the yellow metal plunged then from $1,840 to $1,800. Actually, November was an awful month for gold prices, which dropped from a local peak of $1,941, or more than 7 percent. 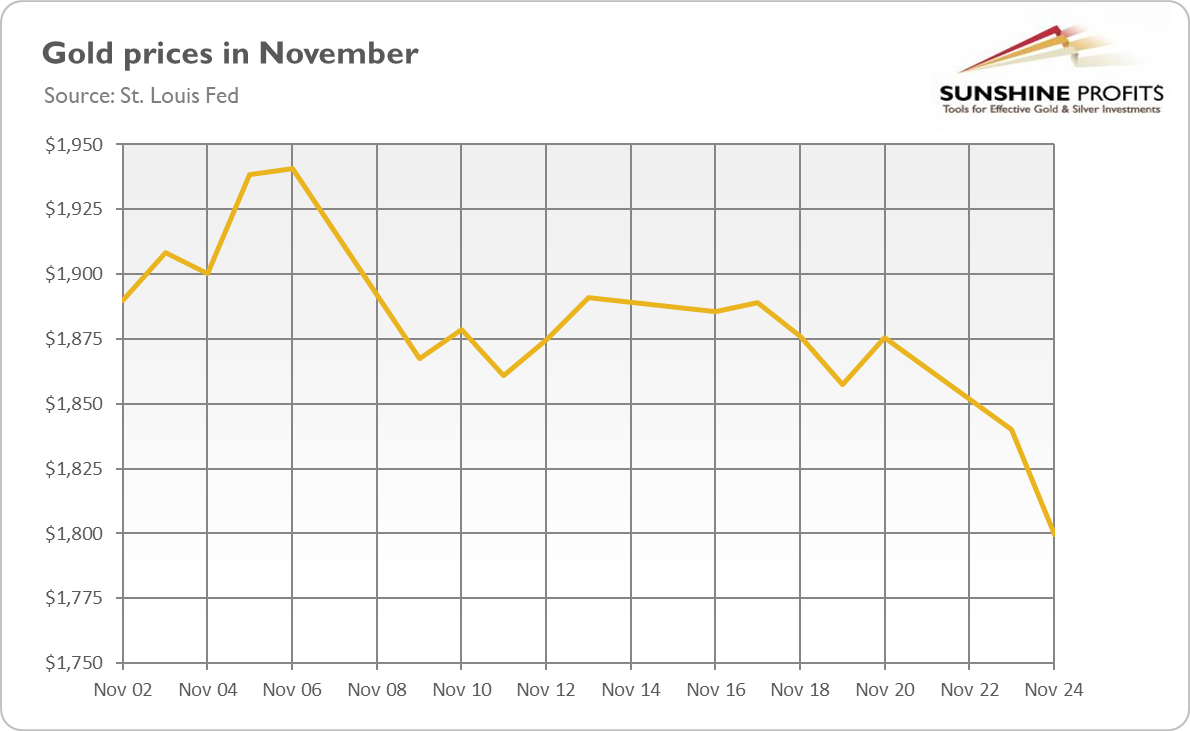 So, what happened? Well, it seems that the positive news of the vaccines eliminated the negative tail-risk related to the pandemic. In consequence, the safe-haven demand for gold declined . On the other hand, the price of Bitcoin has jumped recently as investors increased their risk appetites. Moreover, the elections results also reduced the uncertainty in the marketplace. In other words, the economic outlook is improving as the uncertainty clouds begin to part.

Indeed, this week President-elect Joe Biden announced the beginning of a formal transition of power from Trump’s administration to his. Biden also started to announce nominations for top positions, which served to reduce the risk that a contested election had for uncertainty among investors.

In particular, there are rumors that Biden is likely to tap former Fed Chief Janet Yellen to become the next Treasury secretary. Investors know her and trust her, so they welcomed the possibility of her nomination for a key position in the new administration. Indeed, Yellen is well-known and well-respected, while having the knowledge and skills necessary for the position (although she has more experience in monetary policy than fiscal policy ).

Moreover, Yellen, who is seen as a dovish person , is believed to be supportive of bigger government economic aid in order to stimulate the economy and recover quickly from the coronavirus crisis. Actually, she has for some time been calling for increased government spending to help combat the recession and has always been concerned about the labor markets, low participation rates and high unemployment. As well, as the former Fed Chief, Yellen will closely cooperate with the US central bank and will listen to the Fed’s calls for a fiscal package. She will, therefore, help sustain high government expenditure to assure that the labor market is recovering.

What does it all mean for the gold market? Well, the recent plunge in the gold market is disturbing. Some declines are perfectly understandable as the uncertainty related both to the pandemic and elections diminished. However, the divergence between equities and gold in their reaction to higher odds of more economic stimulus is bad news for the precious metals market. The return of normalcy in the marketplace and resulting strengthened risk appetite could make gold struggle for a while , especially if the real interest rates increase.

You see, the coronavirus crisis was very deep but short-lived and the return to normalcy has to arrive earlier than it did after the Great Recession . However, I don’t think that we will experience a replay of 2013 yet. The risk appetite increased, but the monetary and fiscal policies are still far from normalization. There is, of course, the risk of an increase in the interest rates, but the Fed will actively try to suppress the interest rates as long as it will not see inflation above two percent.

However, the long-term fundamentals haven’t significantly changed. The real interest rates actually remain deep below zero while the U.S. dollar remains weak. These factors should support gold prices and the expanding public debt should also help the yellow metal. Investors also shouldn’t forget about the possibility of a debt crisis or the risk of accelerating inflation when the epidemic ends and people increase their spending.

In other words, the ongoing fiscal and monetary stimulus should support or even push gold prices higher in the medium to long-run. It’s possible that, when confronted with the lack of a fiscal package, the Fed will introduce some changes at its upcoming meeting in December to keep the real interest rates at ultra low levels and to stimulate the economy.