Why Having a Social Strategy Can Revolutionize How You Do Business

We’ve worked in this area for some years and have a good idea of what are the determining factors for what make a successful social roll-out within an organisation.

There’s lots of research from organisations such as Gartner and Salesforce regarding how the buying process has changed and how the growth of social media has now made it one of the primary sources for decision making (if not THE primary source) in the purchasing cycle.

This is well documented and there’s little argument about this. However, legacy processes & KPIs within organisations often suffocate the implementation of social media because salespeople are being tasked with making calls and marketing departments are being tasked with creating more campaigns even though these typically are of progressively less value as time passes.

So if you wanted to create a social organisation, an organisation that leveraged what social activity provides across more than just marketing or sales functions…how would you do that.

In a word, strategy.

There must to be a clear objective and a clear road map. Most organisations are already undertaking some social activities, but these tend to be lacking focus or direction and are pockets of activity rather than part of any larger initiative. Perhaps some of the staff are active on LinkedIn, the marketing team might be tweeting regularly and HR might be placing job ads on LinkedIn.

This is not likely to yield any significant results on an ongoing basis - yes it might generate some lucky wins, but nothing that is predictable or repeatable.

The first step is to acknowledge at the most fundamental level what does and what doesn’t work.

Centralised corporate activities such as posting on the corporate LinkedIn page generally doesn’t generate any value…simply noise. It creates little visibility, almost no engagement and very rarely any leads.

A good example of this would be IBM - an exemplar of professionalism and arguably one of the best management consultancies on the planet. They have (as listed on LinkedIn) 520,083 employees (some of whom may well be freelance consultants or even ex-employees) and they have over 10,000,000 followers of their corporate page. 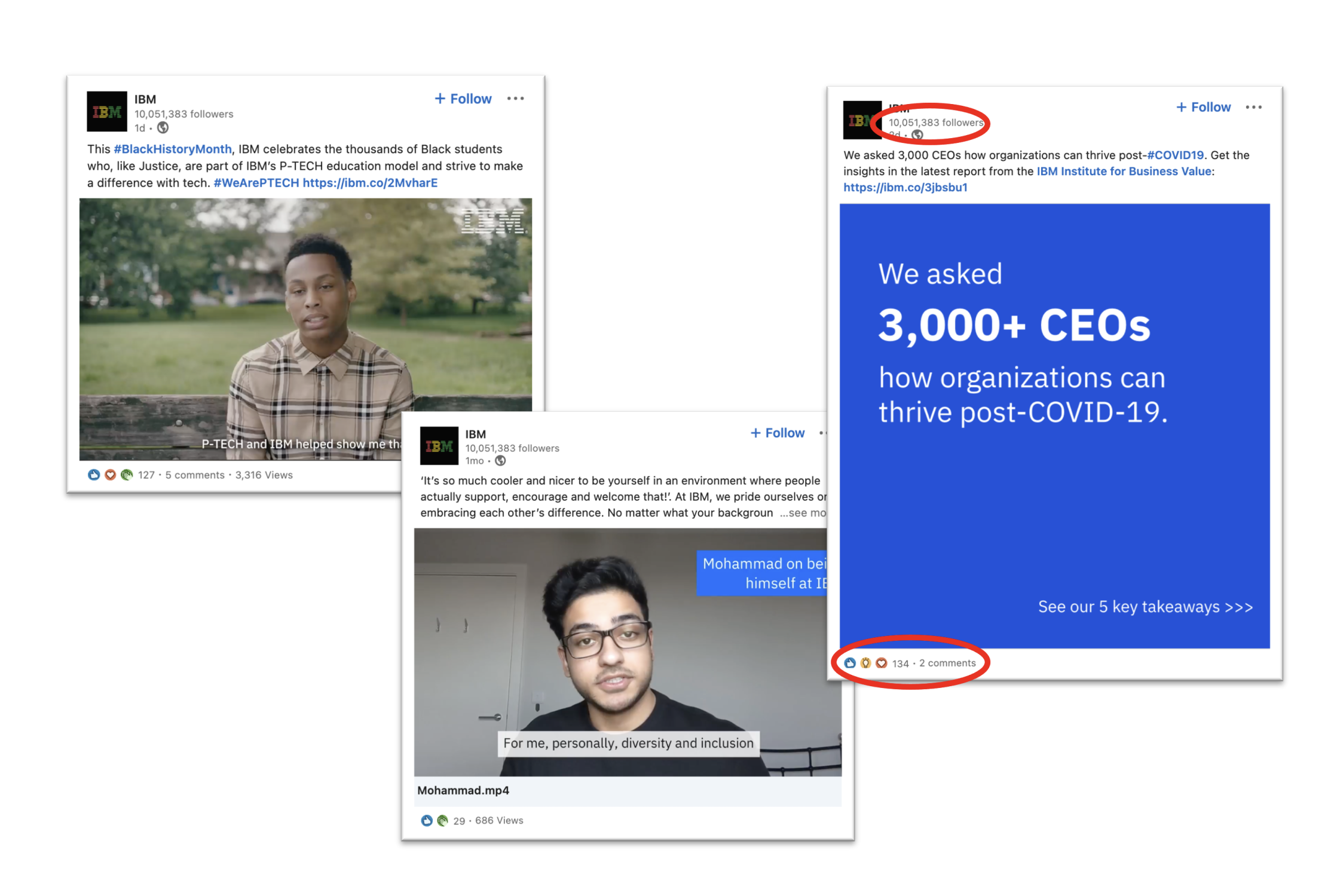 There are an average of 2-3 posts per week (although it does vary). The posts seem to achieve about 100 pieces of engagement (likes and comments). A quick flick through the “likes” on each of the posts shows that the overwhelming majority of these are IBM employees.

If each post is consumed mostly by IBM’s own staff there is almost zero value for IBM from the audience and their interactions because a) those people work for IBM and are therefore unlikely to become customers, and b) probably already know about the content within the post so it won’t even provide any educational benefit.

Any engagement there might be could (arguably) place that content in front of the networks of those employees which is good…but delivered this way it’s rarely effective and here’s why. If a friend of yours shares an article about a case study of their company (a company you know of but have no allegiance to) and how they’ve implemented a new accounting process do you really care? Would you read it? Would you comment & share it? Probably not.

So, we can conclude that this is a strategy that simply isn’t working for IBM. Don’t get me wrong, I’m not singling-out IBM criticism, look at the LinkedIn pages of McKinsey (3m+ followers and 150 interactions per post - many from McKinsey staff), Salesforce (2.5m followers and c. 200 interactions per post - many from Salesforce staff), Oracle (6.5m followers and c. 200 interaction per post - mostly from Oracle staff)…there’s a repeating pattern and it tells us that resharing corporate content on a corporate social property doesn’t get the coverage, engagement or results that we would in any way consider a success.

However, when staff themselves author and post content this really does get results. Typically within all of these large corporates there will be a kernel of people who are great at mobilising their audience and whilst they might not get a “rockstar” number of views and engagements (perhaps 50 or 100 likes & comments say) these tend to be from the people within their network (rather than just colleagues) and in a company of 50,000 staff where each of them has 50 likes/comments on a post that translates to 2,500,000 engagements…worlds apart from the corporate page and the 100 likes it might get.

To achieve this however is a sea change in any organisation. It represents a massive shift in thinking and it requires a more joined-up overview of what the role of people should be and how we measure their successes.

A salesperson who publishes 2 pieces of content per week, achieves 1000 view on each of these and gets 20 likes/comments has started to do more than just prospect and generate leads. Yes, they have now (with the likes and comments) got 20 people they can message and start a conversation with. They are effectively in charge of their own pipeline but, if they maintain this they will by the end of the year have also generated:

Also there are the harder things to measure, how many of that person’s audience will now consider applying to your company for a job? How often might someone now reference your business rather than a competitor as you’re now on their radar? How much will you have reduced staff churn because employees feel that they are part of something bigger, something that has more purpose?

Of course these marketing, branding, PR and HR benefits are in addition to the 2000 leads (20 likes/comments x 2 posts x 50 weeks) that the salesperson has generated.

Think about the extra content clout created by salespeople generating this volume of micro-niched content targeted at perhaps their specific accounts/regions/verticals and both the search benefits and the engagement benefits of all these pieces of content in the marketplace.

Think about how making people social is the most amazing rollout of an account based marketing strategy.

An organisation with a salesforce hundreds…or thousands strong could dominate their marketplace with ease.

But this will not happen by chance or by luck. This will happen by having a plan and understanding what the barriers are to this becoming a reality and how to over one those barriers.

A Social Organisation is an efficient and sustainable organisation. If you would like to know that this entails…ask us.

Related: Predators Are Mostly Prey In The World Of Digital Disruption