What is a professional? Is it the opposite of an amateur?

In the sports world, professional athletes are paid, while amateurs are not. In my business, the title “professional keynote speaker” implies that I’m paid to speak in front of audiences. So, does being a professional simply mean you’re paid to do whatever it is you are doing? 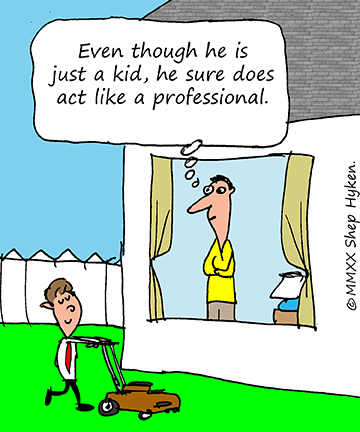 I’ll answer that with a resounding, “No!” It’s definitely more than whether or not you are paid. I’ll argue that “professional” can also refer to the way you conduct yourself. In other words, do you behave in a manner that others would perceive as professional?

My friend Paul Reilly, a professional speaker (yep… another paid professional) specializing in value-added selling, shared a great story. As one of his first jobs out of college, Paul worked at Ferrellgas. One of his colleagues was writing a summary report and was using a dictionary to look up words. Paul was fascinated that this man would take time to look up words for what was considered an informal report. When Paul asked about it, his colleague said, “It may be informal, but that doesn’t mean it shouldn’t be professional.” His idea of taking the report to a professional level was to have no misspellings.

I read an article penned by Dale Salwak in Linking Ring Magazine, the publication put out by the International Brotherhood of Magicians. By the way, these magicians focus on entertainment rather than voodoo or witchcraft, in case you were concerned. Dale is a magician—yes, a professional magician—and one of the best. He learned from Neil Foster, another professional magician who was an amazing performer and an inspiring teacher. Neil had a great definition of being a professional: “A professional just is, that’s all. He or she knows what they are going to do, and they do just that.” Neil goes on to say that a professional performance is always predictable.

After doing a little research about being professional, I’ve come to the conclusion that it’s not about whether you are paid or not—it’s about your behavior. In my world of customer service, it’s about how you act toward and treat others. It’s about the empathy and compassion you have around your customers’ needs. It’s about how you respect those customers and, for that matter, your colleagues.

Professionals at every level and in any profession can behave and act appropriately. That’s what makes their customers, colleagues and team members want to work with them. Being professional earns you respect. It builds trust. It creates a connection.

Related: Would You Fight to Make Your Customers Happy?