“When pigs fly” is an idiomatic expression, which according to Wikipedia, refers to something that is so hyperbolic that it describes an impossibility. It’s typically a sarcastic remark. 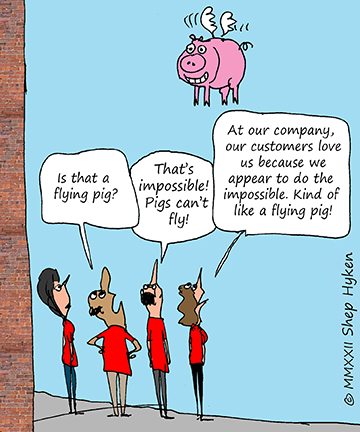 For example, American author John Steinbeck was told by his professor that he would be an author when pigs flew. When he eventually became a famous novelist, he printed the insignia “ad Astra per alas porci” on every book he wrote, which loosely translated means, “to the stars on the wings of a pig.” In addition, in some of his books, he added the image of a flying pig, which he called “Pigasus.” Get it? Pegasus is a mythical winged flying horse. Pigasus is a flying pig. So, why is this important to the world of customer service and customer experience?

I recently presented a customer service keynote speech for a company event at Gershman Investment Corp. As in most of my speeches, I talked about the concept of creating a Moment of Magic®, which is an above-average interaction or experience. That was the setup for an exercise we did in the middle of the presentation. I asked everyone to write down an example of when they created a positive experience – in other words, a Moment of Magic – for either a customer or colleague.

Michael Thomas, Gershman’s VP of Multifamily and Senior Housing, raised his hand to share his example. He said that he was working with a hospital that was building an addition. In the planning process, the client became frustrated as it looked like the best-laid plans were not working out. He said, “If this deal closes, pigs will fly.”

Michael took this as a personal challenge to help move this project forward and, as the client said, “Close the deal.” And that is exactly what happened. When it happened, the client was surprised, amazed, and elated at the same time. And Michael didn’t stop there. He decided to have a little fun with this accomplishment and sent the client a plaque with a flying pig on it, commemorating the experience.

Examples like this make me think, “What a great idea! I have to share this with our community!” So, here’s how to operationalize this idea. Consider creating a plaque or certificate to honor the hard-working employees that accomplish the seemingly impossible. It should be given to anyone deserving, not just one winner. You might even consider a monthly award. Then at the end of the year, you can let the entire company vote on the top three. Share the best-of-the-best examples, so everyone can learn that what seems impossible can be accomplished. Have fun and celebrate great accomplishments. After all, an image of a flying pig should make you smile.

Related: Three Simple Ways to Get Customers to Trust You