What’s Normal for Us Can Be Amazing to Others

During my live presentations, there is a part of my speech where I talk about Moments of Magic. These are positive experiences we create for our customers, including our internal customers, also known as our fellow employees. (If you’ve been following my work, you already knew that.) 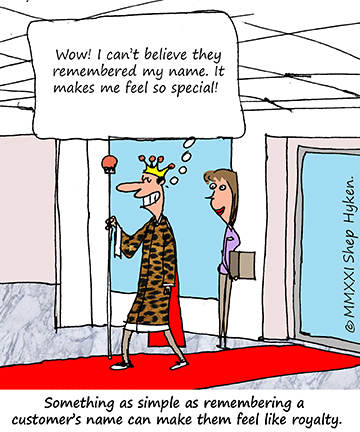 In the speech, I’ll ask audience members to share an example of when they created that experience.

During a recent keynote presentation to an audience of managers of a major retail chain, an example was shared, and it was a good one. A customer had left her purse at the store. It was found by an employee who put it in the manager’s office for safekeeping. Just as the manager was about to call the customer, the customer called the store. She was elated that the purse was found and said she would pick it up first thing in the morning.

The next day, the customer arrived and was so appreciative. In addition to that appreciation was a surprise. She couldn’t believe that everything was still in the purse, including her wallet, credit cards, and cash. The employees didn’t understand why she was amazed that everything was there. Wasn’t that the way it was supposed to be?

Of course, it is. The store employees are honest. However, when the customer lost her purse, she started imagining the worst. She thought the purse was probably gone forever. In her mind, someone had probably found it, taken the money and credit cards, and dropped the purse in a trash can. She was expecting the worst.

This is human nature. In stressful situations, it’s hard to avoid negative thinking. Once she realized her purse was safe and nothing was taken, she was relieved and grateful, even though she had feared the worst.

On the other side of the story were the employees who did what they were supposed to do, without really thinking about it. And there is the point. Doing what is normal is sometimes amazing to others. For example, it surprises me when we return a phone call on the same day the customer calls, and they say, “Wow, that was quick!” It makes me wonder what their expectation is. Do they expect to have bad service or a slow response? Unfortunately, it may be what they are used to.

This is why delivering amazing customer service really is within the grasp of everyone and every company. I preach to be better than average – even just a tiny bit better – all the time. That’s what gets people to say, “They are amazing.” It’s consistent and predictable. And often that “tiny bit better than average” is really the way it should be, anyway. It’s common sense. Be nice. Return calls quickly. Thank the customer for making a purchase. And of course, if the customer leaves a purse or wallet, keep it safe for them. After all, it’s what we’re supposed to do. But to the customer, that’s what makes us amazing.

Related: The Unexpected Stands Out – Especially If It’s Bad