Something happened last week that gave me pause. Many other dialogues made me think and consider angles I hadn’t even noticed before and for that, I am very thankful to both our team and our clients and prospective clients but this interaction, in particular, left me pondering for a long while. 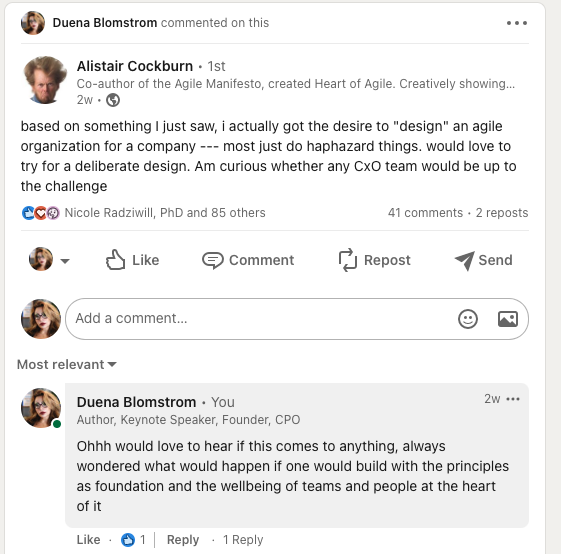 Here’s why it matters. Because if the titans of the topic (Alistair was one of the initial signatories of the Agile Manifesto y’all!) are this tentative regarding designing and executing on safe, sane and high-performing cultures and if someone like Cockburn himself presents the possibility of assisting with this creative act from scratch as a novelty, not the bulk of his work, then who is out there advising the companies that so desperately need the hand-holding regarding the topic?

Maybe the sad answer is “no one” it certainly seems to be “no one of value”. How does any FTSE 1000 company justify not observing the state of their HumanDebt enough that they would need to throw their hands up in the air and say “Right, this looks complex but essential, let us get EVERYONE of value in to tell us their perspective on how to redesign culture fast!” and then busied themselves with parading the top 10-20 influencers and thought leaders (hated as those terms are) in both People and Culture and Agile end DevOps to learn from them all?

Part of it is because it’s so difficult to separate true value from mere noisy chaff and ensure the best minds are at the table but most of these experts have either written books that can serve as a preview of the philosophy they subscribe to or what framework they have invented or perfected or if not, they are active enough on LinkedIn or blogging enough to make their point of view clear. Perhaps the IT/DevOps/Agile Culture crew is too modest and we need some lists, after all, I give an informal one of who all are must-reads to all our new team members -and God forbid any isn’t impressed with a Kent Beck or a Gene Kim interaction!:)- because some people just have the answers.

In FinTech you can’t move for Influencer lists - top people in digital, in transformation, in FinTech, in crypto, you name it. An absolute smorgasbord of “top names” and a few of these people are household names and resident acts on the conference circuit and we have “seen” and “lived it all” but not even we are being called to preach our “change or die” privately to an eager-to-learn executive audience.

Don’t get me wrong we get invited to speak “internally” at private enterprise events all the time, but they rarely amount to a genuine working session with the board where ideas flourish and plans are sketched on how to execute on the large-scale transformation anymore, but instead, they turn out to be an un-actionable one-way information session to the rest of the enterprise presumably to inspire and uplift and don't even get me started on how cruel and inefficient that could be when coupled with management that doesn't even end up turning up for the tech days or the internal conference keynotes.

This has in fact, in my view, taken a turn for the worst over the semi-return to normal of the past year or so. In the run-up to the pandemic the proportion of “theory only” versus “we are trying to move mountains, we need help executing please” type of engagements was vastly different. There are at least 6 big banks where I may have started with a keynote based on my "Emotional Banking - Fixing Culture; Leveraging FinTech and Transforming Banks" book heralding the imperative need to change but they soon called me back and asked for best practices culture-wise and we rolled out our sleeves and started learning, experimenting and thinking together.

We audite their HumanDebt with searing honesty, we listened to all that hadn't been listened to in ages, we asked everyone to co-design, we modelled them all on the Aristotle skeleton and we rethought flexibility and outcomes, ensured they had organisational permission in place and that practices for the human work existed so they can further dissect any matter remaining unsorted. A lot of genuine and open hard work. Where these organisations are today in terms of their culture after that effort has started but halted because of Covid, is disputable. Whether they arrived at the clear plate and the big change is a complicated answer but they all had the invested and caring demeanour of passionate and still connected leadership teams.

These days those calls have all but stopped and even when it comes to evaluating such a hands-on and evidently helpful tool such as the solution we created at PeopleNotTech, the leadership teams we meet do seem like they’ve quietly quit. We got the protagonists of that phenomenon all wrong - if you want to see employees that do nothing but the bare minimum, never volunteer contradiction, criticism, vulnerability or ideas and never are invested enough to be empathic then we need to look at the top of the organisations, not at the office manager that minimises their workload so they have more time for memes.

So it’s these leadership teams that truly care about the urgency of culture change to win that are missing. They aren’t blind to the need, just not there. Not engaged enough in the purpose and impact of their work to do this big piece. They’re leaving it to the next generation most likely. They’ve checked out. They aren’t making themselves better and more agile and continuously improving so they can be in good shape for this big “lower HumanDebt and change culture now” initiative. They aren’t out there avidly trying to assimilate all the knowledge possible so they can use it to power plans of action.

I have yet to hear of one enterprise saying “Can’t do anything this side of the year as we are still trying to gather all expert opinion we can so we can make an informed plan to redesign culture from scratch or find ways to audit and revamp ours”. So they’re not thinking and expectative or gripped by pondering holding patterns.

They are simply not interested. Not in the knowledge. Not in the learning. Not even in the shortcuts. Why is that?!? How can execs dream they can deliver on such a big transformational piece in the absence of the concentrated knowledge these experts have? Truth is - they don’t. They don’t think they will without them and they likely don’t think of the massive transformation either no matter what the soundbites claim.

After all, as we have said over and again, the crisis of mental health, that of lack of EQ and above all, that of lack of true passion, emotional investment and engagement doesn’t stop at the plebs but very heavily affects management. So heavy in fact that they are too checked out to be undertaking any of this gargantuan task. Or to undertake it in earnest.

So if anyone is still out there listening and caring and is high enough to do anything about this thorny topic - un-burnout your leadership team. Get their heads and their hearts back in the game somehow. With some it may be reigniting their initial spark, with others reminding them of their individual goals, some may just need the genuine sense of working together in a team and psychological safety that is utterly missing at the very top, whatever it is that works you’ll think of. And once they start exercising their heart muscle again have them parade those titans and those subject matter experts and have them help redesign a future that we ought to have already been living in.

Related: Let's Name the Winners of the New Paradigm of Work