The Gentleman's Guide to Indoctrination

In my previous article, I said that you should…

The question is, how?

This goes deeper than what most copywriting and marketing experts talk about: influencing individual choices. How to get readers to read this… click that… buy the other thing.

Indoctrination isn’t telling people what to decide. It’s shaping and molding what they believe.

Let me tell you a little historical anecdote.

Alexander the Great conquered much of the known world during his reign. As he continued his conquest, he reached a point when he realized his army was stretched too thin. They were too weak to defend themselves.

The only option was to retreat. But once Alexander’s enemies noticed his retreat, they’d surely pursue and defeat him.

Alexander had an idea.

He ordered his men to make several giant breastplates and helmets that would fit 8-foot tall soldiers. When his army retreated during the night, they left the oversized armor behind.

When the enemy force found the armor, they were convinced Alexander commanded an army of Goliaths. That wasn’t a fight they were looking for.

Alexander lived to fight and rule another day.

I hope you caught the point of this story.

The giant armor changed what Alexander’s enemy believed about Alexander — and his own luck.

Granted, that’s not a textbook study of indoctrination, but it illustrates the critical point: that we can intentionally shape what other people believe.

Specifically what they believe about us.

If that sounds creepy to you, remember: you’re not installing harmful beliefs. You’re trying to improve someone’s life.

Remember this, too… SOMEBODY is indoctrinating your customers and prospects (and your children, for that matter).

Shouldn’t that somebody be you?

Here’s where you get started.

Foundation on the Familiar

It’s relatively easy to get people to believe something they WANT to believe. And people readily accept and adopt beliefs that feel familiar… that confirm (in some way) what they’re already convinced is true.

In the story above, Alexander the Great’s army was already known for being brutal and seemingly invincible on the battlefield. After seeing the giant armor, it all made sense.

“No wonder Alexander has conquered the world!”

Your indoctrination attempts shouldn’t make a full frontal assault on an entrenched worldview. Rather, you want to introduce a new idea that feels right and fits into the preexisting beliefs.

As an oversimplified example, which of the following statements fits is likely to be more easily accepted by the average American?

Losing weight is easy when you [fill in the blank]…

Losing weight can be hard, but that’s because of [fill in the blank]…

They already have entrenched network of perceptions, beliefs and feelings about those categories.

And it can be hard to compete with those existing beliefs.

As a master indoctrinator, there are two ways to deal with this:

1) Create a new category. If a person can’t fit you or your product or service into one of their predefined boxes, they’ll have to make a new box.

Now YOU get to directly inform what he believes and how he feels about the new category — where you stand alone.

Sometimes this is as simple as communicating with people who just haven’t formed strong opinions of your category yet.

For example, 95% of the people on the planet seem to have no idea what a copywriter is. It’s a blank slate I’m forced to define at every family gathering.

2) Modify the existing category. If you already know what someone believes about a topic, you can help them see the inadequacy or outdatedness of his definitions.

This can be risky, because people really likes to hear that his understanding of the world is wrong.

But think of any diet program you’ve ever heard of. Atkins, keto, eating for your blood type. They’re all championed by people trying to update your thinking about how the body processes food.

(Now think about the fact that marketers seem to have more influence over the way we think about health than scientists or doctors!)

You can control the narrative about your business by controlling which mental category your audience puts it in.

Becoming recognized as an authority might be the most effective thing you can do to power your indoctrination efforts.

People are eager to defer to authorities and experts, often without realizing it.

I’ve talked about authority several times in the past, so I’ll just mention one thing.

Your personal story — how you came to experience and understand the idea you’re trying to share — is likely to carry more weight than scientific studies (which make fantastic supporting arguments).

Your story makes you an authority, whether or not you have credentials or position.

To a certain extent, you have to out-communicate competing systems of thought.

Our brains are biased towards information they’ve heard recently and repeatedly.

You’ve heard that a lie told often enough is believed. But it’s not about the lie. It’s about the repetition.

A few things you can do to gain a greater share of your indoctrination subject’s time:

Shortly after we bought our new home, we received this jar opener in the mail this week as a “welcome to the neighborhood” “gift.”

Progressive wants a physical presence in our new home. 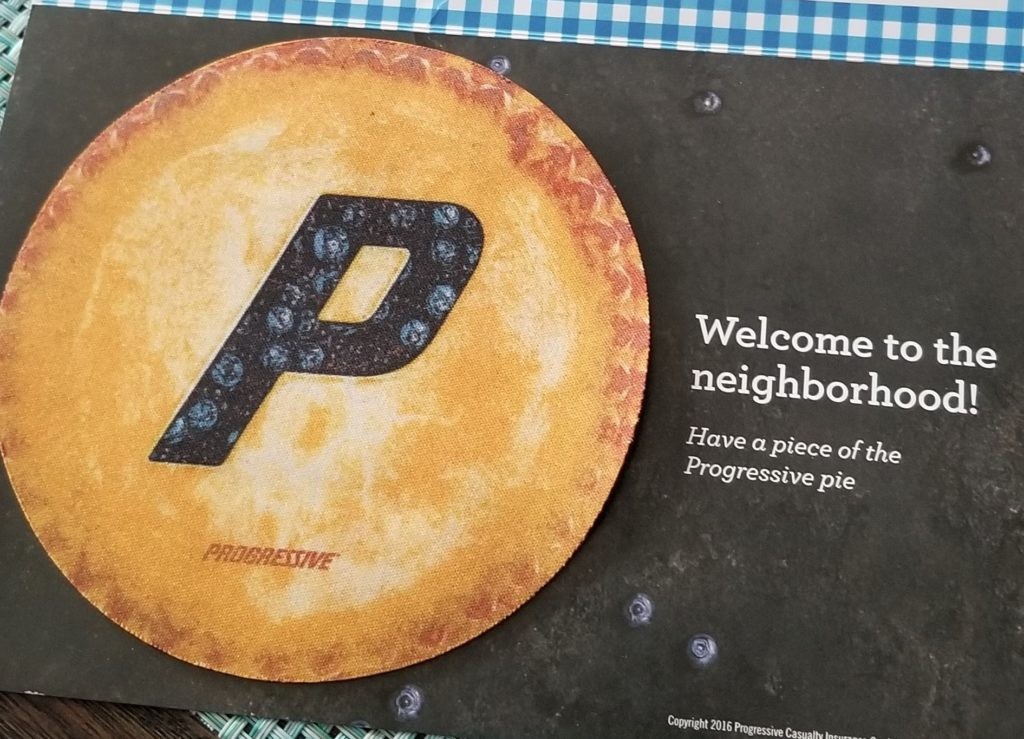 Obviously, we could cover a lot more ground, but I hope you’re already starting to get ideas to start or enhance your indoctrination work.

Now, go make the world better in a way that ONLY YOU can do it.

Related: Someone's Been Indoctrinating Your Customers ...