Will Investing in European Equities Ever Pay Off?

Over the past 15 years, investors have been frustrated with the performance of European equities. During this time period, MSCI Europe ex-UK has delivered a 5.9% annualized return in U.S. dollars relative to the 9.0% delivered by U.S. equities. For a while now, the relative valuation argument has been strongly in Europe’s favor – and still is, with Europe’s price-to-earnings ratio trading at a 20% discount to the U.S., compared to its long-term average of 11%. But investors wonder, will investing in European equities ever pay off?

There are 5 reasons to re-consider investing in European equities, in addition to valuations:

1. Western Europe has crushed its COVID-19 curve: During the dark days of late March, hard hit countries like Italy, Spain and France were seeing a daily growth rate of new COVID-19 cases at 157%, 88% and 52%, respectively (compared to 48% in the U.S.). Now, the daily growth rate of new cases has sharply declined to only 0.1% in these countries (compared to 1% in the U.S.). Together with enhanced testing capability and contact tracing and isolation procedures, this leaves Europe in a strong position to continue their recovery in a sustainable and confident manner.

2. Reopening is leading to a large economic growth delta: In order bring COVID-19 under control, hard-hit European countries implemented very strict quarantine measures. As a result, Google Mobility data shows that activity in retail and recreation fell to 90% below normal levels in Italy, Spain and France (compared to the U.S. drop to “only” 45% below normal). Since early May, European countries have begun to gradually reopen and activity is rebounding smartly. In the hardest hit countries, activity is now operating at about 35% below normal – a 55%pt improvement that compares to the U.S.’ 30%pt improvement. This will likely result in a larger hit to 2Q GDP in Europe – but also to a larger bounce in 3Q.

3. A “United States of Europe” might finally be possible: In the early innings of the pandemic, Europe behaved as usual, with each country responsible for its own fiscal emergency relief measures. High debt countries hoped that the European Central Bank bond purchases would be enough to keep their interest rates from rising too far too fast. However, there has now been a truly fundamental shift in Europe’s approach. The European Commission has proposed a joint €750bn recovery plan, financed by issuing joint debt backed by the EU budget and distributed based on need, to deal with the pandemic. In practice, this would mean that wealthier countries would pay more into the pot, while poorer countries would receive more out of it. While not yet final, the plan has received Germany’s approval – a first in the European project.

4. Europe’s cyclicality is a way to tap into the global recovery: One of the reasons that European equities have lagged behind the U.S. is the sector composition of its market. It has a significantly higher representation of cyclical sectors compared to the U.S.: 50% of market capitalization vs. 34% in the U.S. As the European and global economic recovery continues (and gains steam next year, likely once a vaccine is distributed), it will be exactly the cyclical regions that will outperform.

5. European equities are not just about Europe: In addition to the more positive domestic European story, European equities are also a way to gain exposure to global themes, with 54% of MSCI Europe ex-UK’s revenues coming from outside of the region. In particular, Europe is home to the largest luxury consumer brands, which are directly tapped into the growth of the emerging market middle class and their growing discretionary spending.

Activity is rebounding sharply in Europe 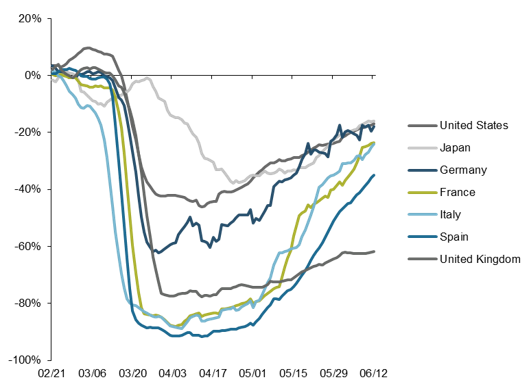