Global equity markets are reeling from the prospects of tighter monetary policy, yet not all central banks in the developed world are equally to blame for the selloff. While the U.S. Federal Reserve, the Bank of Canada and the Bank of England are among those in G7 nations that have or likely will raise interest rates to combat inflation this year, the Bank of Japan (BoJ) is maintaining its ultra loose measures because the country’s inflation rate is forecasted to remain below its 2% target well into 2023 or beyond. In fact, not only is the BoJ vowing to buy an unlimited amount of Japan 10-year government bonds (JGBs) to defend its 0.25% yield target, but it is also expected to keep its key lending rate below zero until at least the end of this year.

In doing so, the Bank of Japan is sowing the seeds of a monetary policy divergence with some of its counterparts that could be a significant tailwind for many Japanese stocks. The key, given the Japanese economy’s heavy dependence on exports, is whether this divergence leads to relatively stable JGB yields and helps maintain a competitive Japanese yen versus other G7 currencies.

This is especially true for the larger export industries in Japan. Pharmaceuticals, autos and information technology have overseas sales ratios over 50%, on average, according to Daiwa Securities, and may stand to benefit most from a real effective exchange rate for the Japanese yen that is already at its lowest level since 1972, the Bank of International Settlements shows.

Japan’s equity market, more broadly speaking, could also benefit from a further rise in U.S. real yields (adjusted for inflation), in part, because of its largely cyclical composition. Japan’s TOPIX Index of the country’s largest stocks, for example, has regularly outperformed the MSCI All Country World Index when the U.S. 10-year Treasury real yield has been rising, including, most recently, in the early part of 2021, but has tended to underperform when the same U.S. 10-year real yield has fallen or is range bound as it was in the latter part of last year. 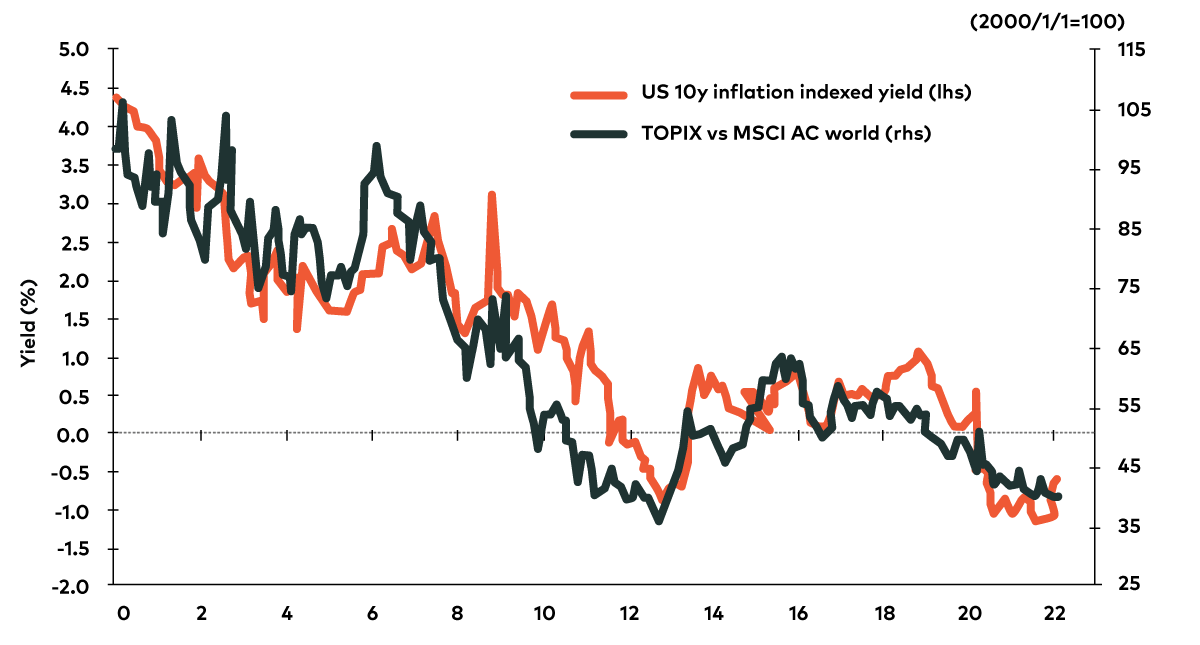 Beyond these potential catalysts, some Japanese stocks could get a lift from positive earnings revisions later this year if the re-opening of the global economy continues to accelerate.

Granted, how much of a boost this provides may depend on the strength of the economies that Japan sells to most. This includes the U.S., its largest export market, where the economy is expected to moderate but still grow at a solid pace of 3.7% this year and 2.6% in 2023, according to the World Bank.

China, Japan’s second-largest export market, is also crucial to this equation. It suffered through one of its worst economic periods in recent memory during the second half of last year, partially because of tightening measures enacted by the government. But the People’s Bank of China is loosening monetary policy and cut its policy interest rate in January for the first time since April 2020. If China’s economy does bottom and accelerates from here, it could give the earnings of Japan’s exporters an additional boost.

At the same time, it’s important to highlight the potential of Japan’s own economic recovery. Having fought through five waves of COVID-19 over the past two years, the re-opening of Japan’s economy has been thwarted by intermittent government restrictions throughout the pandemic, but that looks set to change in the days and weeks ahead. The quasi-emergency measures in 31 prefectures including Toyko, that account for over 80% of Japan’s GDP, for instance, are largely due to end on March 6 of this year, according to the Japan Times.

Still, that may only be one of the steps toward Japan’s full recovery. Currently fighting another wave of COVID-19 that could culminate in negative GDP growth this quarter, there is growing evidence that case counts may soon peak at the same time the country’s vaccination rate speeds up. To date, only 4.5% of the country’s population has had its booster shot, according to ABC News, but that number could be markedly higher within weeks now that the country says it is on track to administer one million booster shots per day.

In other words, the economic backdrop in Japan is improving and may only get stronger from here. Moreover, with earnings season all but done, operating profits of listed Japanese companies are already at new all-time highs, according to CLSA Ltd.

Clearly, then, Japan’s equity market has a lot going for it. But the catalysts don’t end there. Japan’s stock market is also less correlated to global equity markets than Europe or the United States, making it a good potential diversifier for some investors, while its relative valuation versus the S&P 500 is at a multi-year low, thus creating a potentially attractive entry point for others.

All in, Japan may be one of the better opportunities available to investors this year, especially for those who are selective. Companies that are industry leaders in overseas markets may be the biggest beneficiaries of the policy divergence described, but companies with strong balance sheets and operating leverage that stand to gain from better economic conditions within Japan may also do well as the Bank of Japan continues to zig while other central banks zag.

Related: Assessing the Market Impact of Russia’s Invasion of Ukraine

The commentaries contained herein are provided as a general source of information based on information available as of February 25, 2022 and are not intended to be comprehensive investment advice applicable to the circumstances of the individual. Every effort has been made to ensure accuracy in these commentaries at the time of publication, however, accuracy cannot be guaranteed. Market conditions may change and AGF Investments accepts no responsibility for individual investment decisions arising from the use or reliance on the information contained here.

The MSCI information may only be used for your internal use, may not be reproduced or redisseminated in any form and may not be used as a basis for, or a component of, any financial instruments or products or indices. None of the MSCI information is intended to constitute investment advice or a recommendation to make (or refrain from making) any kind of investment decision and may not be relied on as such. Historical data and analysis should not be taken as an indication or guarantee of any future performance analysis, forecast or prediction. The MSCI information is provided on an “as is” basis and the user of this information assumes the entire risk of any use made of this information. MSCI, each of its affiliates and each other person involved in or related to compiling, computing or creating any MSCI information (collectively, the “MSCI Parties”) expressly disclaims all warranties (including, without limitation, any warranties of originality, accuracy, completeness, timeliness, noninfringement, merchantability and fitness for a particular purpose) with respect to this information. Without limiting any of the foregoing, in no event shall any MSCI Party have any liability for any direct, indirect, special, incidental, punitive, consequential (including, without limitation, lost profits) or any other damages. (www.msci.com)