Stripe’s IPO – How Much?

We all got excited a couple of years ago about the biggest FinTech IPO that would ever be listed. Ant Group would have listed with a valuation over $300 billion. They didn’t, because President Xi blocked it after Jack Ma messed up, but it was exciting whilst it lasted. Now there’s another big FinTech IPO on the horizon: Stripe. Last time I looked, they were valued at $95 billion. That was a year ago, which probably means they’ll be worth $200 billion or thereabouts today. Exciting times.

When I put this in context, I compare Stripe’s valuation to the market capitalisation of traditional banks. If Stripe is worth $200 billion, then it’s worth more than ING, BBVA, Deutsche Bank and Commerzbank combined.

You have to bear in mind that Stripe is no longer just an API for merchant checkout, but a lot more.

There is no issue with this. It just shows the breadth and reach of a start-up that wants to break the mould, and by mould we mean mould.

I was presenting in Brazil the other day, and the break the mould thing hit me when researching background on Nubank, another of my favourite FinTech start-ups. When I went to Brazil in 2015, the banks and government regulators appeared to work together as some sort of mafiosi, who gunned down any new ideas. Then Nubank stepped in with a low-fee credit card and stormed the market. Bear in mind the banks charged $20 a month for the pleasure of having a card, it wasn’t a difficult revolution.

If you’re interested in the Nubank story, this Forbes article is brilliant. I particularly liked the quotes from David and his co-founders.

“Nubank could never have been started by a local. . . . It required a Silicon Valley investor who has seen this story of the tiny ant going against the elephant and succeeding. A Latin American investor sees that and says, ‘No way, the elephant is going to crush you.’ ” David Veléz, Nubank’s cofounder.

The article is well worth a read to see how a group of non-Brazilians created Brazil’s biggest bank in an environment that seem impenetrable. When the start-up launched its’ IPO in December 2021 on NYSE, they were valued at USD$50 billion and had Warren Buffett as one of their investors (15%). They had more online and app users than Bank of America, and were worth more than Bradesco and around the same as Santander.

Not bad for a new-born.

But it’s the nature of the ebbs and flows of trade and finance, particularly exemplified by what is happening as we move from analogue to digital.

Perhaps the best example of this is the tweet I posted the other day about Tesla. 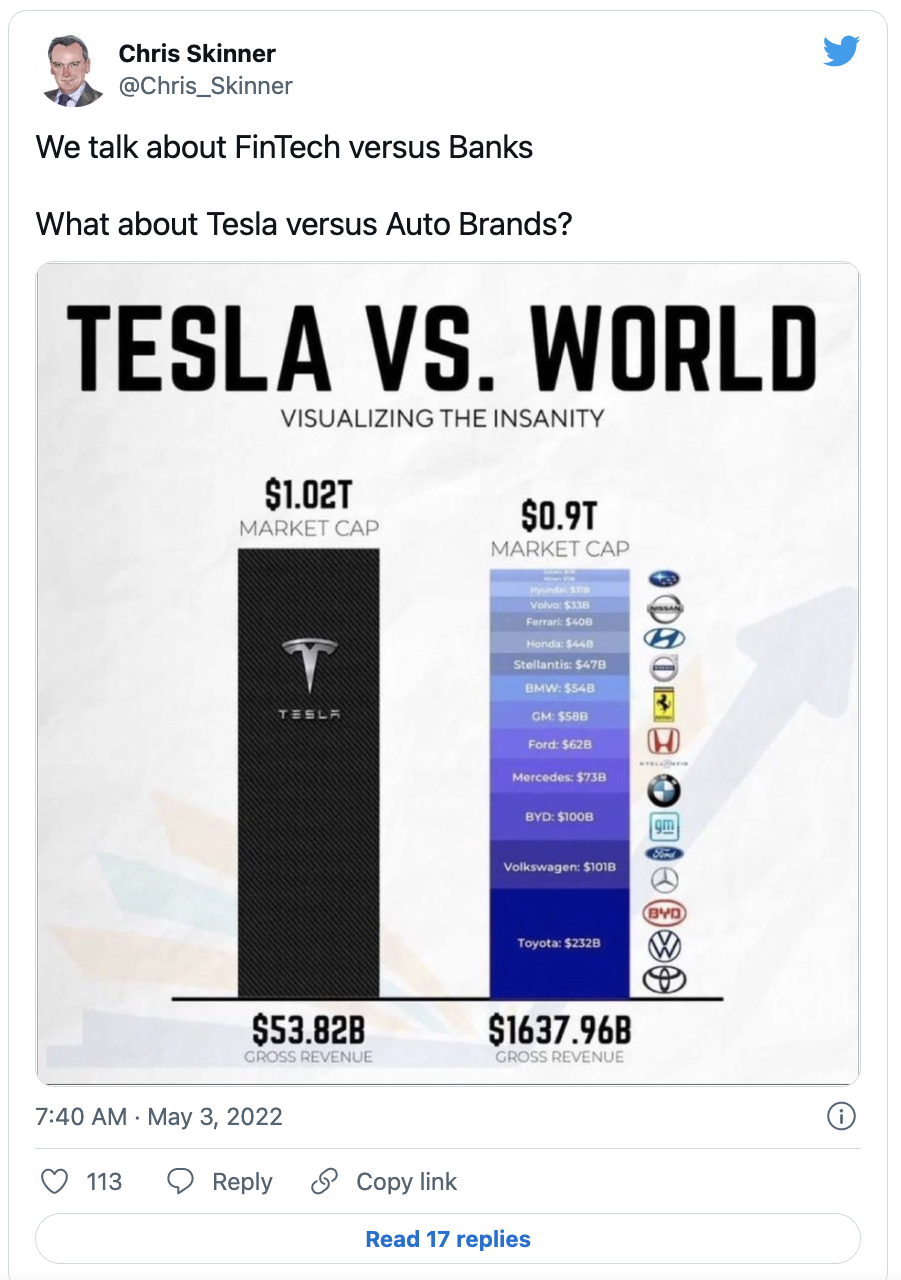 Tesla is now worth more than most of the big old brands combined.

When new firms with new ideas and new capabilities using new technologies find their mojo, then the old firms with old products and old structures using old technologies whither on the vine. We can see this in action today in all industries, not just in auto and finance. Isn’t life fun?

Related: Fintech in Russia: How Has This Changed Since the “Special Military Operation”?