Is Market Relief Just Around the Corner?

It has been a rough week on Wall Street. The major averages are trading lower on an unexpected surge in US Corona Virus cases and jitters over the upcoming US Presidential Election. Wednesday's trade was no exception, pushing stocks down by over 3% on the day with Visa (NYSE: V) and Caterpillar (NYSE: CAT), leading the charge lower. The poor trading action on the day follows similar down days earlier in the week despite a host of corporate earnings reports mostly meeting Wall Street analysts' expectations.

Is the Market Finally Catching Up with the Economy?

Some critical market pundits suggest the market rally has gone too far and is now ripe for a correction. For example, on Tuesday, famed investor Mark Mobius warned that the S&P 500 is forming a "double top" going into the US election, a worrying sign for investors. The following day, Greenlight Capital founder David Einhorn warned that the top is in for the US stock market after an "enormous" bubble in technology stocks. The S&P 500 reached its first top on 2nd September and its second top on 12th October. Technicians think the market is poised to re-test the lows of 23rd September, a zone of resistance during the upward price move in June 2020.

Is the Market Divorced from Reality?

Another thing worrying investors is the massive disconnect between a stock market mostly fuelled higher by US Fed intervention and an economy that reported its worst-ever result in the second quarter. On Thursday, investors receive a first look at third-quarter US GDP growth statistics. Economists expect data to bounce back sharply and predict growth of 32.5% compared to the contraction of 31.4% seen in 2Q20 because of the COVID shutdown.

Either way, the Covid crisis has kicked up some impressive statistics. One of the oddest is the negative correlation between the stock market's performance and the health of the economy. The chart below shows the 10-year rolling correlation between the two going back to 1960. Never in the data history have the two data sets ever been negatively correlated, meaning there has never been a case when the economy shrank and the stock market rose until the Covid crisis. The chart below shows how the Fed's intervention has pushed the market up while the economy tanks. 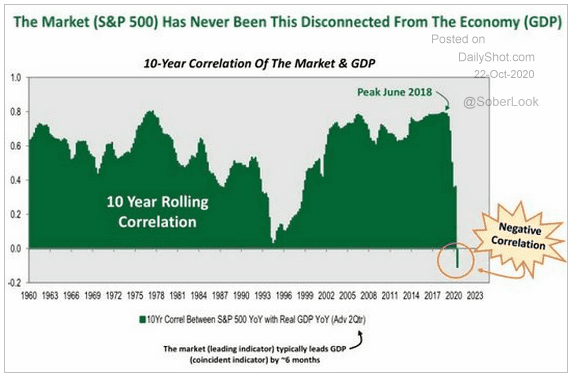 One has to wonder how long this game can continue. There is an old saying on Wall Street about "don't fight the Fed," meaning do not invest counter to what the Fed is doing. But can the US central bank keep pushing the market higher if the economy is in the doldrums? If GDP growth does not bounce back the way some experts expect, can investors anticipate that corporate earnings will remain robust? Perhaps the pundits are correct, and now is the exact time to take some chips off the table. Autumn has historically been a turbulent time in the market (1929 and 1987, to name just two years). Perhaps 2020 will be another year to add to that list?

Related: What Can You Expect from Amazon Stock in Q3?