Do US Elections Matter for Equity Investors?

Investors are anxious as the US elections draw near. Although politics haven’t mattered much for equity returns in the past, things could change this time because several powerful trends that developed over recent decades have set the stage for this year’s explosive political agenda.

With election day approaching, equity markets have had no shortage of political news to digest. In early October, President Trump contracted the coronavirus, raising concerns about how the final stages of the campaign will unfold. The next stimulus package is stuck in a Washington logjam. And fears have mounted that an unclear outcome in November could trigger months of uncertainty, at a time when coronavirus cases are on the rise in parts of the US and Europe, and the US economy needs decisive policy decisions to combat the recession.

Stock Returns Have Historically Been Apolitical

Political risk often makes headline news. However, over the long term, the party affiliation of the US president has had almost no impact on stock returns. In fact, since 1937, the Dow Jones Industrial Average returned just over 9% annualized, no matter which party’s president occupied the White House (Display). 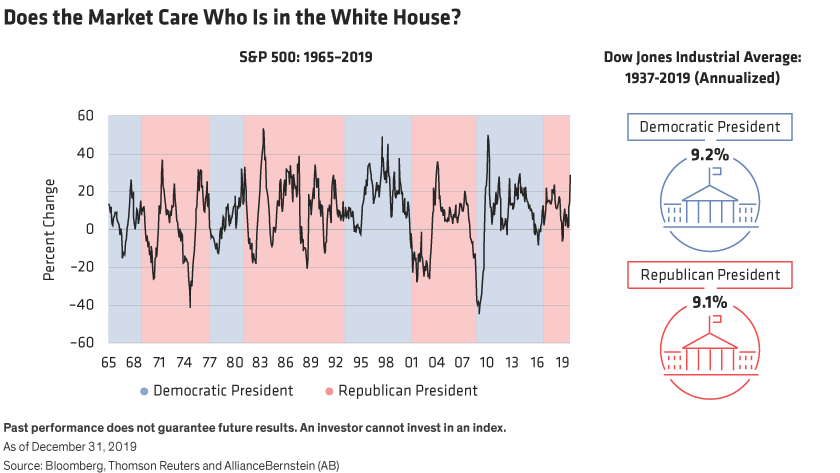 Will 2020 be different? Quite possibly, yes. That’s because the COVID-19 crisis has crystallised several long-term trends that have been developing over four decades and are making a big impact on the election agenda as well as the outlook for stocks, in our view.

2020 Election Agenda Has Been 40 Years in the Making

The campaign news cycle may refresh every 24 hours, but we trace this year’s election agenda back to around 1981. At the time, four major trends began to accelerate and create what we call the most powerful fundamental cocktail in modern financial history.

Against this backdrop, US stocks delivered consistent gains for almost two decades. But there was a problem: while these four ingredients produced massive investment returns, they also contributed to a widening income gap in the US. 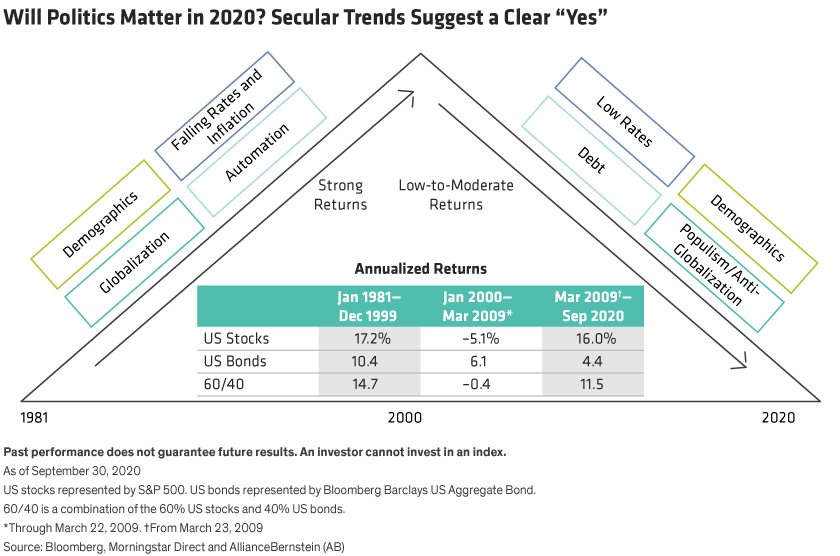 At the turn of the millennium, all the tailwinds from the previous two decades began to turn into headwinds. Within a decade, markets were hit by two major crises: the bursting of the dot-com bubble in 2000 and the global financial crisis in 2008–2009. Baby boomers began to retire and withdraw money from markets. Governments took on massive debt loads. And with wages growing much more slowly than corporate profits (Display, left) and economies, a backlash against globalization was brewing that would eventually inspire a rise in political populism. From 2000 to 2009, annualized US stock returns were an average ‒5.1%. And a 60/40 portfolio of stocks and bonds was flat. After 2009, even as stocks recovered steadily from the GFC for a decade, the wealth gap continued to widen dramatically (Display, right). 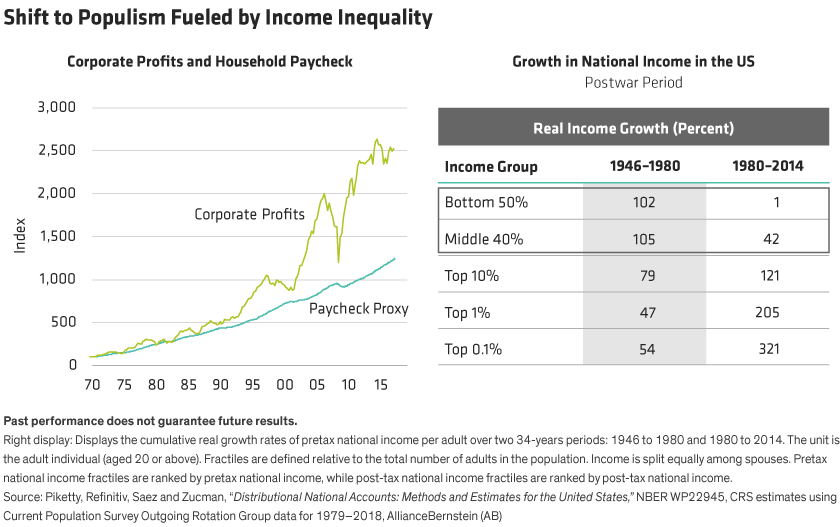 Post-Election Scenarios Are Hard to Predict

These trends weren’t engineered by presidents or politicians. Yet they’ve had a profound impact on the political agenda behind the 2020 election campaign, and in particular the huge partisan divide on a raft of issues from immigration to racial inequality to the COVID-19 crisis.

Post-election implications are hard to predict. Our economists have developed post-election scenarios, which assume that the House of Representatives will be retained by the Democrats. The key variable is fiscal stimulus. So if Republicans take the White House and Senate (a “red wave”), an expansionary fiscal policy would probably stay in place. Should the Democrats win the presidency and the Senate (a “blue wave”), corporate tax hikes are likely, and could weigh on financial markets in the short term, but fiscal policy would probably remain expansionary. In other scenarios, such as a Republican president and Democratic Senate, or vice versa, we expect various versions of gridlock.

However, we would advise against building an investing strategy based on a potential election outcome for several reasons. First, predicting a political outcome is notoriously difficult. Second, even if you predict the outcome correctly, markets don’t always follow expectations; in 2016, many pundits expected markets to suffer if Donald Trump was elected president, but stocks continued to rise.

Third, what goes into the political hopper often comes out very differently. So while major policy and regulatory decisions on the table today could affect stocks—particularly in sectors such as technology, pharmaceuticals and energy—it’s almost impossible to say how the political processes will play out.

So what should investors do? In this environment, consider portfolios that can provide downside mitigation, even if they don’t capture all the gains in rising markets. Portfolios like these can provide better long-term investment outcomes, in our view.

To do that, an investing strategy needs to rise above politics. Instead of investing according to the prevailing political agendas, we think investors should focus on the state of the world that underpins those agendas. No matter what the election outcome, our research suggests that stock returns in the coming years will be more moderate than in the past. That’s because of the trends in debt, demographics and geopolitics/populism described above, as well as pandemic-related impacts.

Looking at today’s world through a COVID-19 lens, we think high-quality stocks and thematic portfolios can offer strong potential for consistent long-term return patterns. But how you choose those stocks can make a big difference. For example, companies with persistent profitability should be well equipped to surmount recessionary challenges. Balance-sheet strength can help a company thrive through and beyond the pandemic. And high free-cash-flow rates provide companies with flexibility to enhance their competitive position.

Many thematic trends are likely to persist under any political scenario. In healthcare, for example, even if pharmaceutical firms face political pressure over drug pricing, the demand for digital health data and DNA sequencing is likely to keep growing. Whether or not the next administration supports efforts to combat climate change, private sector demand for sustainable transportation and clean energy is set to continue.

Developing a strategy based on these ingredients can help investors stay the course through politically volatile times. And that’s very important, in our view, because over time, investing based on political changes has been a losing strategy (Display). We’re not saying investors should ignore political risk, but these hazards should be assessed as part of an evaluation of risk factors for individual companies and not as a primary guide to portfolio or allocation strategy. 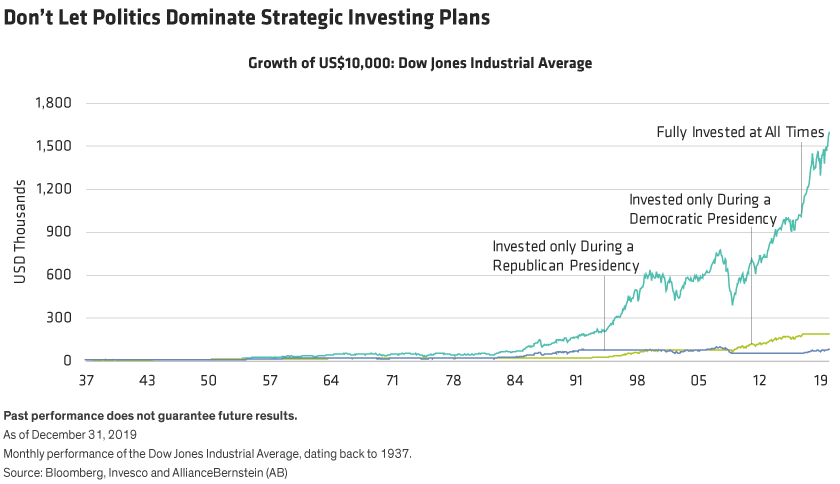 So while these elections might matter for equity markets, it shouldn’t dominate equity investing plans, in our view. By following a strategy based on fundamental research of individual companies, we believe investors can create allocations that should be able to deliver solid long-term results long after the election outcome is decided.

Related: What Impact Will the US Election Have on Markets?