Asian Stocks Have Momentum in The Year of the Ox

Happy Year of the Ox! Last Friday, China and a number of other Asian countries celebrated the Lunar New Year, also known as the Spring Festival.

In pre-pandemic years, the Lunar New Year has been an opportunity for individuals and families to travel and visit loved ones. Millions of Chinese people took as many as 3 billion trips in early 2019, representing the largest annual human migration in history.

As you might imagine, things look a little different in February 2021, more than 12 months into the global pandemic. Although China has mostly contained the virus, travel is largely being discouraged. Officials expect only 1.2 billion trips to be made this year by plane, train and automobile.

That’s bad for families, obviously, but good for Chinese factories and exporters, some of which are offering bonuses to workers who put in the hours over the holiday. New orders continue to be red hot following a record year for exports, proving again that China remains as the world’s factory floor.

The Asian country ended 2020 with a record trade surplus of some $78 billion as demand for medical supplies, electronics and household goods surged. For the first time ever, China’s total global exports amounted to 14.3% of all global trade, according to Morgan Stanley. China is now the single most important trading partner to an incredible 64 countries, up from only five in 2001. For comparison’s sake, the U.S. is the top trading partner to 38 countries, down from 60 in 2001.

It’s for this reason and more that I’m extremely bullish on the country and believe it to be one of the most attractive regions to invest in going forward. I find it remarkable that China responded to the virus without having to break the bank with excessive stimulus. Whereas the U.S. is likely to spend some $10 trillion in monetary and fiscal policy by mid-2022, or about 50% of its GDP, China’s cumulative spending over the same period is estimated to be only 6% of GDP.

China Could Overtake the U.S. as the World’s Largest Economy Earlier Than Expected

Speaking of GDP, China was the only major economy to see economic growth in 2020. It expanded 2.3% while the U.S. economy shrank at about the same rate.

This divergence could mean that China’s economy may overtake that of the U.S. much earlier than expected—by as soon as 2026, according to one estimate. 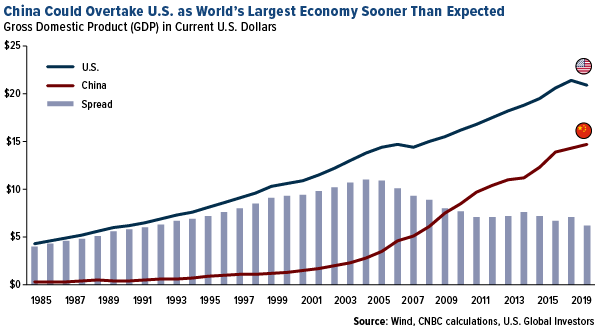 Take a look at the chart above. The spread, or difference, between the size of the U.S. economy and Chinese economy has been tightening since the mid-2000s, but I believe we may see it tighten further to an all-time record low by the end of 2021 as economic growth in China continues to outperform.

S&P Global Ratings expects China’s GDP to expand 7% this year. I’ve come across even higher forecasts—some as high as 8% and 9%—so this seems a little conservative to me. As for the U.S., the Congressional Budget Office (CBO) is looking for a 5.6% annual growth rate in 2021, which, if accurate, would be the fastest rate since 1983. 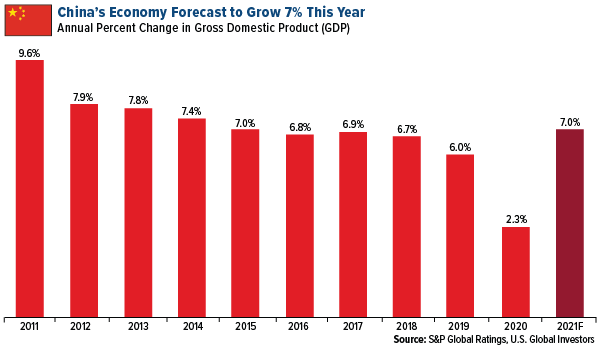 Is it any surprise, then, that businesses are scrambling to get access to the country?

According to the United Nations Conference on Trade and Development (UNCTAD), China was, for the first time ever, the number one destination for foreign direct investment (FDI). Inflows into China rose 4% in 2020 compared to the previous year, marking the second highest rate following India, even as total FDI across the globe collapsed 42% due to the pandemic. Businesses poured $163 billion into China, making it the top country for FDI ahead of the U.S., which attracted $134 billion. That amount represents a nearly 50% plunge from 2019. Developing economies like China now account for more than 70% of all FDI, according to the UNCTD. 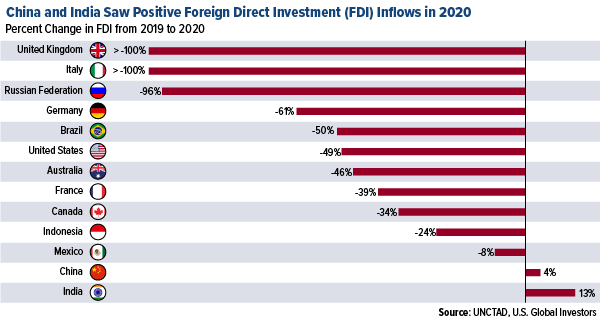 To clarify, FDI is not the same as investing in the shares of a foreign-based company. Examples of FDI might include mergers and acquisitions (M&A), manufacturing, logistics and more.

China itself has been making massive foreign direct investments through its One Belt One Road (OBOR) initiative, the country’s unprecedented infrastructure strategy across as many as 70 countries across four continents. Last year, renewable energy such as wind and solar made up a bulk of the OBOR’s energy investments as countries accelerated their shift away from fossil fuels. As a share of China’s total energy investment, renewables were 57%, or $11 billion, in 2020.

Asian Markets Were Top Performers in 2020

There’s some disagreement about whether FDI has any impact on stock market performance, but it’s worth pointing out that Asian markets outperformed their global peers in 2020 and continue to show momentum in the new year. Among the best performing markets were South Korea, Taiwan and China, which helped the MSCI AC Asia ex Japan Index end 2020 up about 20%, ahead of the S&P 500 and FTSE All-World Index. Denmark and Sweden rounded out the top five best performing markets.

Which is appropriate since metal prices this year should remain heavily supported by demand from China. On top of the ongoing OBOR initiative, the country is expected to spend$1.6 trillion through 2025 on advanced tech projects like 5G networks and electric vehicles (EVs), which will require biblical amounts of rare earth metals, nickel, copper, aluminum and more. This year, sales of EVs are projected to reach 1.8 million units, a 40% increase from 2020, which should be supportive of lithium prices.

Related: Bitcoin Has Hit the Big Leagues. Will Apple Bite Next?