Active Investing in a World Awash with Modern Portfolio Theory

Ah, yes, Modern Portfolio Theory (MPT).  Harry Markowitz eventually won a Nobel Prize for his research on this new and exciting investment idea.  The year was 1952; Eisenhower was just elected president, Polio was still a major threat to children, the Detroit Lions were about to embark on a dynasty decade in the NFL, the average house price was $9,050 (source: thepeoplehistory.com), and in 21 short years the first computer with a monitor would be invented.

I am going to be critical of Modern Portfolio Theory in this article.  This may be abrasive to some.  I simply want to open up the discussion about the evolution of markets and market structures, and that times have changed.

When Modern Portfolio Theory was created, individuals received their investing news via newspaper.  These individuals also received actual stock certificates (stock certificates were used into the 1980’s).  In this environment when you are reading yesterday’s news to determine whether you should buy or sell a security and would have to trade stock certificates with a broker, it made sense to trade as little as possible.  Diversifying to limit risk (regulation was surely not as strong as it is today) and simply perform to a reasonable level as the overall market was an efficient way to invest.

Fast-forward nearly 50 years to the tech bubble.  Stocks are being bid up by institutional and retail investors alike to absurd new levels.  Price-to-earnings ratios of the S&P 500 hit their highest level ever at about 33 (note: Today’s PE ratio of the S&P 500 is about 39).  Irrational exuberance has gripped the market for years and there was this belief that the market could never crash (note: sounds familiar).  Riding the wave via MPT has been a great success through the 90’s.  For the next three years, the S&P would crash 55% while the Nasdaq would crash about 80%.  Was this predictable? Yes.  The simple 10 month moving average graph signaled a good time to get out. 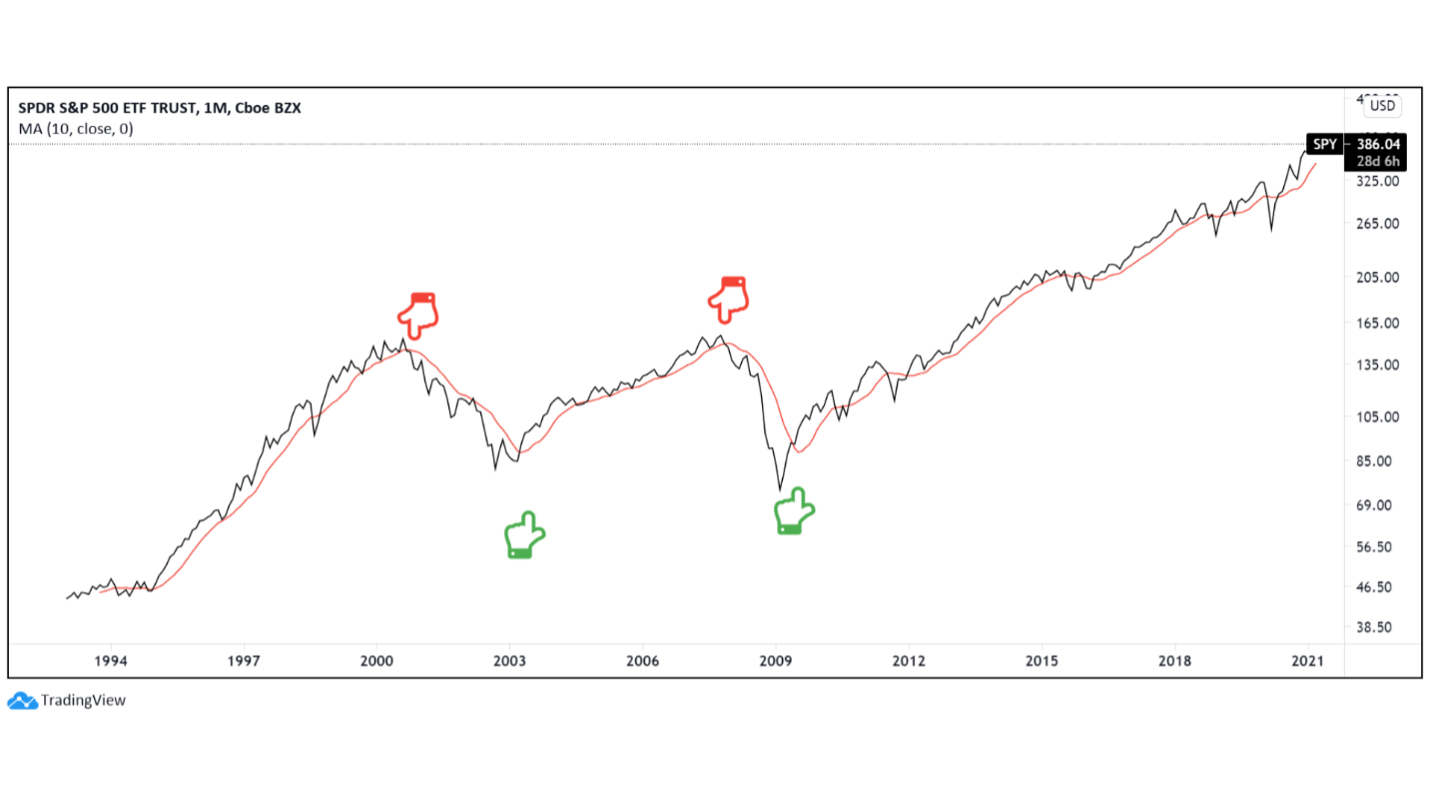 In this graph, the SPY is in black, while the 10-month simple moving average is in red.  This is an introductory indicator to technical analysis and a quite simple one to utilize.  When the SPY price (or any other security you are tracking) crosses the 10-month moving average down, a sell signal is created.  When the security price crosses upwards, a buy signal is created.  There are of course times where the security crosses both in a short timeframe and there is a minor whiplash effect.  Yes, you may lose a small percentage on these trades, but you avoid the big drops and take part in the big gains.  For instance, applying this for both the Tech Bubble and the Financial Crisis would have saved you significantly. By selling towards the top (red hands), you may have saved yourself a 50% drop twice, reentering towards the bottom (green hands).  This 10-month moving average strategy will still typically result in long term gains during bull markets and is not all that active.  The same idea can be applied to shorter timeframes, such as the 50-day moving average below.

Also note that from 2000 there was little to no appreciation in the typical MPT portfolio until 2013!  When evaluations have run as high as they were (again note: they are higher now), forward returns for the next ten years are generally muted.  In this example, if one retired in 2000 with a MPT portfolio, one likely had to return to work along the way.  As an investor, your time horizon is limited and reducing downside risk may help prevent you from rejoining to the workforce. 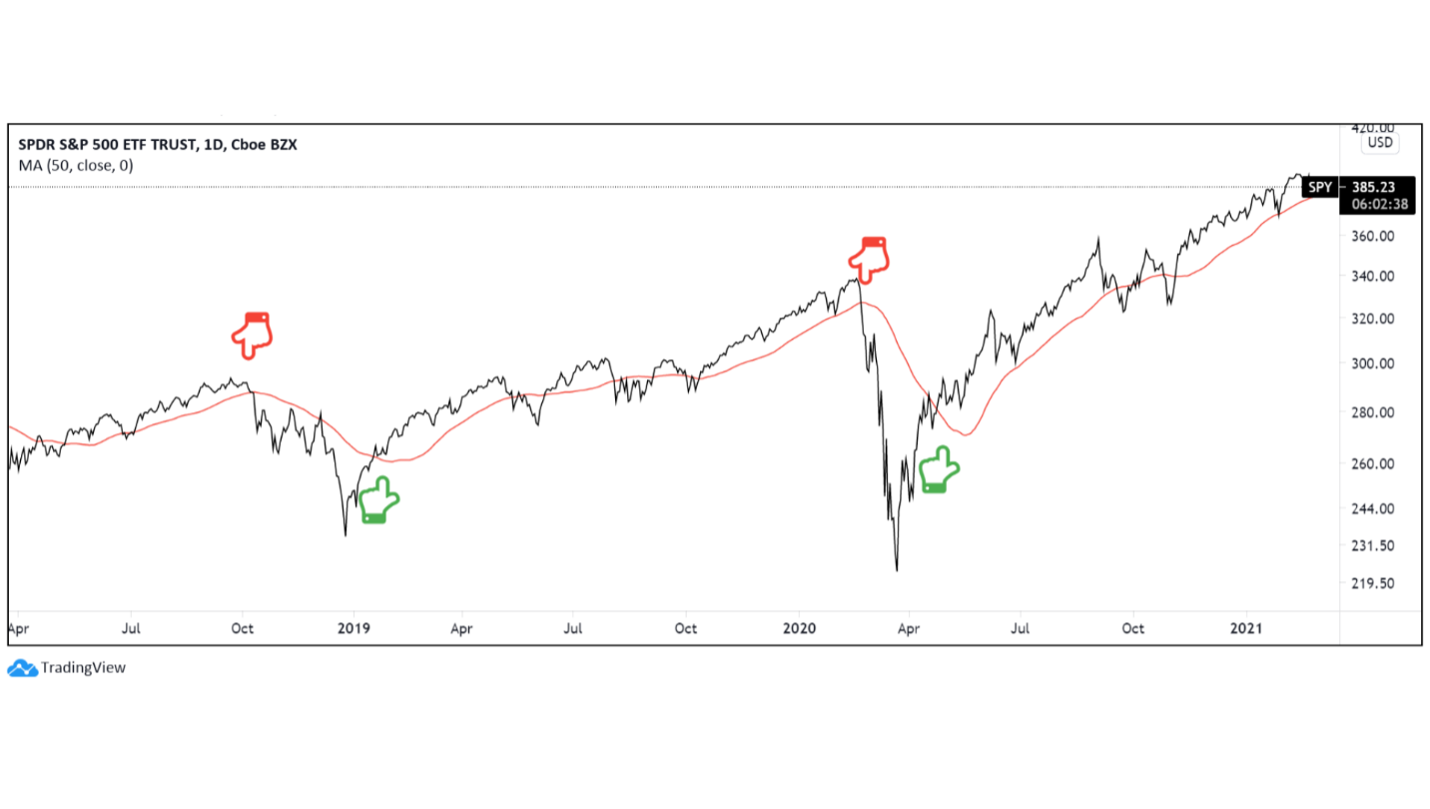 In a similar manner, any time the security crosses the moving average, it creates a buy or a sell signal.  There of course is more whipsawing between the movements and more trading overall, but this strategy would have saved your portfolios from the precipitous drops of late 2018 and February 2020.  I hear a lot of investors and advisors alike make comments about how no one could have predicted the sharp drop in 2020.  Well, it may have been hard to predict how far the drop would be, but one look at this graph would have produced a whopping sell signal towards the top.

So why is Modern Portfolio Theory still so popular?  A cynic would say because it is the easiest investment style for investment firms and banks to manage and to sell to clients.  I don’t believe it is that straightforward, but I do appreciate modern technology changing the dynamics of what is optimal.  As with all research, it is always worth building upon the old and seeking out a new and more efficient way forward.  There are an infinite number of investing strategies out there.  I suggest learning all that you can about the strategies that you believe oppose your viewpoint on investing and keeping an open mind.  Who knows, maybe you will save your portfolios from the next downturn.